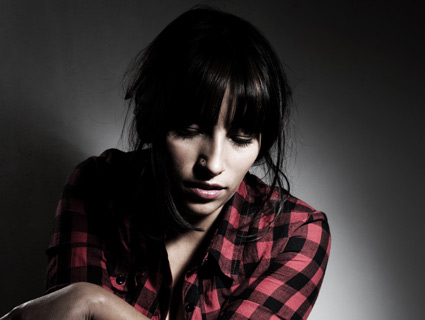 According to French-Chilean rapper Ana Tijoux, Chileans really know how to butcher Spanish. “Every culture has their own slang, but I think in Chile specifically we speak very bad,” she says over the phone. “So we have a lot, a lot of slang.”

Despite this, or maybe because of it, Tijoux has an incredible way with words. Even if listeners don’t understand her Spanish, they will sense the graceful fluidity of her style, which often relies on unusual syncopations and internal rhymes. Tijoux, who spent a childhood in France after dictator Augusto Pinochet forced her parents into exile, says she’s “always been fascinated by the aesthetic of words.” As down-to-earth as they come, she manages to make use of quotidian conversations, minor details, and yes, plenty of “slahng” (as she pronounces it), to render the world in poetry.

Her growing fame is no longer confined to Chile, where she’s been popular since the ’90s. Latin Americans will recognize her from when she laid tracks alongside Mexican pop star Julieta Venegas in the smash single “Eres Para Mi.” Last year, as her album 1977 became a hit, Tijoux came into her own as a solo performer and emerged in the rest of the Americas. She toured the US for the first time (also appearing at South by Southwest), earned a place among Rolling Stone Argentina’s 50 Albums of the Year, and clinched a Grammy nomination for Best Latin Rock, Alternative, or Urban Album. “It’s been very unexpected and very beautiful,” Tijoux says of all the acclaim. In anticipation of next Sunday’s Grammy Awards ceremony, I asked the rapera to give me the lowdown on Chilean street slang.

Mother Jones: Tell me about some of the chilenismos you use in your music.

Then you got po. Normally, you get to say ya pues, which is kind of like, “yeah,” and here we say: ya po. We forgot about the “s” in almost every word, and we say: Ya po, cachai?

The other day a friend told me that we are so poor in speaking Spanish in Chile that we use only 200 words, a lot of cachai, ya po, and hueavón. Hueavón means asshole. We use it for everything, like to say “stupid,” or we can say huevón simpático, which is like, “stupid nice person.” “Oh, he’s a stupid nice person!” But at the end he’s not bad.

There is one that is more new, and I really like it. We say: stai sonando. That would mean like, estas sonando, like, “You’re happening!” You should say estas but we say stai. For example, if you’re on stage, and you go down, it’s like, “Wow, stai sonando.” You know like, “You’re hot, you’re in.” Something like that.

MJ: In the song “Partir de Cero,” you say: Una cuestión de tiempo, voy a partir de cero, y regresar al inicio (It’s a question of time, I’m going to start over, and go back to the beginning). What are you referring to?

AT: I think that when it’s a new year, we all need in a certain way to say “this year will be different.” I think that’s why we make that part of New Year’s. Each year we’re together, and when it’s 12:00, it’s like everybody is saying in a certain way, “I will begin everything again in a good way.” Si o no? We all do that. So the song was, perhaps, a song I write for myself. I think in life, you begin over and over again all the time. It’s like you’re in school, then you begin university, then you get married, have a kid, get a divorce, it’s cyclical. You always begin again. But at the same time, it was something like trying to remember why I began what I begin to do, in this case rapping. How I began, and why I do this.

MJ: Your album is called 1977. Why is that year important to you?

AT: Well, I mean, it’s a biography. I made one song with the name “1977,” and, I’ve got to be honest, I thought it was the best name for the album. I don’t have an explanation more than that.

MJ: That was the year you were born?

MJ: Two snake tattoos. Is the snake a power symbol for you?

AT: Yes, because I think of the snake power of change—moving, free. It’s like a solitary and free animal also. And it’s an animal that changes all the time. I’m not afraid of changing.

MJ: How is your experience touring in the US different from in Chile?

AT: To be honest, I think in North America I laugh more because I speak English but don’t know every word, so sometimes I invent. And it makes it funny.

MJ: You tweeted about your CD: “It was worth it, bringing Chile to the world.” What should people know about Chile?

AT: I think that Chile is a beautiful, weird country. I don’t know…if you want we can speak two hours. It’s weird, it’s super weird. There are amazing people, but it’s weird.