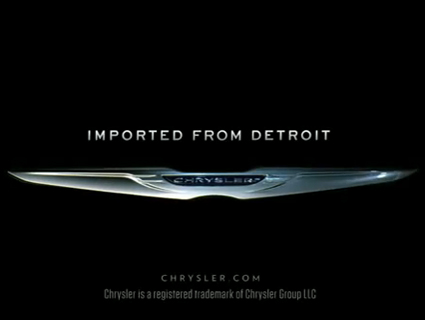 Screenshot courtesy of <a href="http://www.youtube.com/watch?v=V0HLIvtJRAI">YouTube</a>

[UPDATE: The AP reports that Chrysler’s allegedly heartfelt ode to Detroit was the brainchild of a Portland, Oregon, ad agency whose other major client is Nike. The automaker shifted its ad accounts to the Portland shop after its previous PR firm, the storied BBDO, ended its Detroit operations. Which probably had something to do with the car manufacturer’s stiffing BBDO to the tune of $58 million.]

In case you missed it, Chrysler—a car corporation that’s better known for bailouts, buyouts, and management shuffles than reliable cars—somehow succeeded in winning hearts and minds last night with its two-minute Super Bowl ad buy, the longest and most expensive in the Big Game’s marketing history. “Imported From Detroit,” the $9 million ad, starred not a car but the beleaguered Michigan burg, its troubles, and its market-anointed favorite son, rapper Eminem, declaring: “This is Motor City, and this is what we do.” The attempt to jumble Detroit’s urban problems and its big-name corporate overseers into one orgasmic pulse of hip-hop-infused Americanism apparently succeeded. “Did you see it? Or, if you’re a Detroiter, did you feel it?” genuflected one columnist for the city’s dead-tree media. That made Ad Age‘s gushing sound downright subtle: “What starts out as a down-on-our-luck tribute to a broken city morphs into a defiant, we’re-back rallying cry.”

But most appalling is the idea that Chrysler is one of the great things about gritty Detroit and America, when in fact it’s one of the corporate locusts that choked the city and nation purple with its credit-backed gobbling of skilled labor and its excretion of abandoned worker plants. It’s as if some Wall Street marketer hired by Chrysler was stuck at his social-worker sister’s apartment in West Harlem and skimmed her copy of the November/December Mother Jones while she was preparing two cups of kombucha in the kitchen. Because, clearly, the creators of this ad read Charlie LeDuff’s amazing elegy for his hometown…and, clearly, they didn’t get it at all.

If you weren’t already weary of a corporation that’s switched hands from one European parent (Daimler) to a Dan Quayle-connected private capital firm (Cerberus) to another European parent (Fiat) in the last 13 years, shedding jobs and factories along the way; if you weren’t already pissed about the $15 billion Chrysler’s gotten in bailout funds, which were necessitated by Chrysler’s desire to squeeze more profit out of lending credit than selling cars; then consider this: Here’s a list of plants and complexes closed or downsized just in the Detroit area by Chrysler since 1980. Note that this doesn’t include the many more plants it’s opened and shuttered before 1980 (like the Dodge main plant in Hamtramck, a Detroit suburb that’s been begging the state to let it declare bankruptcy), or plants closed in recent years in Missouri, Delaware, Indiana, Ohio, Alabama, New York, Canada, Mexico, Brazil, Venezuela, and presumably elsewhere:

Seriously, if KBR made cars, they’d be Dodges and Chryslers and Jeeps.

Not that we should be surprised at all. For a long time, Chrysler has been a failing business, reliant for survival not on new ideas or better cars but government largesse. As a result, its advertising has always tried to sell the company’s cars as indispensable pieces of America. Remember this commercial from last year, for example?

Oh, sure, you say: All US car manufacturers do that. OK, but there’s a difference. Ford and GM want to manipulate you into displaying your patriotism by buying their cars. With Chrysler, one gets the sense that they don’t care one whit whether you buy the car, only that you recognize it as your patriotic duty to keep the company alive with whatever it needs from the taxpayers’ kitty. In fact, maybe they could have saved the $9 million and used a new marketing slogan: “CHRYSLER: Just lie back and think of Detroit.”