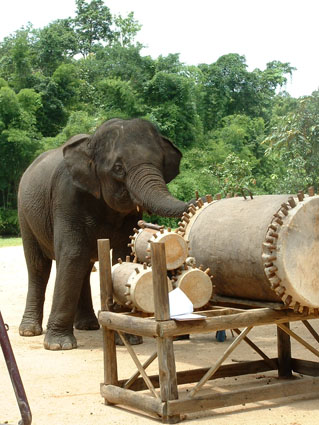 Imagine building a xylophone for a 6,000-pound mammal. Columbia University neuroscientist slash experimental musician David Soldier (aka David Sulzer) teamed up with elephant expert Richard Lair, and did just that. At the Thai Elephant Conservation Center (TECC), in Lampang, Thailand, the two men taught elephants to play oversized xylophones, drums, chimes, and even harmonicas. An American expat, Lair knew about Ruby, an elephant that had famously learned how to paint pictures. He also understood that elephants loved music. After meeting Soldier, he asked him to join the Thai Elephant Orchestra project, an endeavor that, beyond science and art, was intended to draw attention to the elephants’ plight.

Over the past 100 years, Thai elephants have plummeted in number from roughly 100,000 down to about 3,000. Almost all of the survivors are domesticated, explains Soldier. Ironically, a national ban on logging in 1990 contributed to their dilemma, although the ban was needed after 98 percent of Thailand’s teak forests had disappeared. Thousands of mahouts (elephant handlers) were previously dependent on the logging industry to feed their animals, which can eat up to 400 pounds of roughage per day. 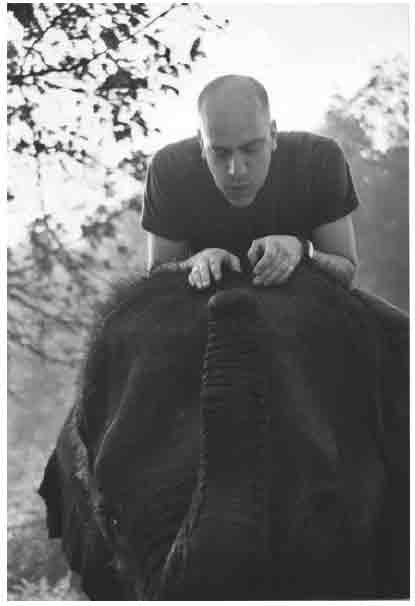 Soldier sits atop JoJo (Courtesy David Soldier)Though the Thai Elephant Orchestra records don’t raise a ton of money for the TECC, they do attract tourists, whose currency helps pay for the elephants’ care. Last week, Soldier and Lair released the orchestra’s final CD, Water Music, a compilation of surprisingly apt cadences and clumsily swinging notes that meet in a ghostly, Asian-like melody. Sometimes, Soldier says, local musicians will join the elephants for a song after a lot of prompting. On “Invocation,” the album’s aptly titled first cut, a Buddhist priest-mahout named Boonyang accompanies the mammal musicians by chanting the elephant prayer, a traditional litany for the elephant’s spirit.

Soldier says the elephants pick up rhythms quickly, especially Luk Kop, the orchestra’s “star drummer,” who has learned to play rhythms on three different drums. “They don’t play tunes,” Lair told a British documentarian. “But what they do have is a really strong sense of rhythm. And that’s where the secret is. I think the music is wonderful because it’s not written down. I mean, you really have to open your mind.”

The animals are incredibly intelligent. They can do pretty complicated tasks, like following instructions requiring geometrical analysis, or performing nursery rhymes from memory. “Try teaching your cat to do that,” Soldier challenges.

The elephants are introduced to the instruments by their mahouts, who gently wrap the animal’s trunk around a mallet, and guide the tool into a striking motion against the instrument. After a few attempts, some elephants show interest (often the younger ones), while others just walk away. This is the entirety of the orchestra tryouts.

Like in any band, there is an occasional onstage spat between members, disrupting the jam session. Elephants have extremely complex social lives, notes Soldier. “There are two best friends at the center,” he says. “But sometimes they get angry at each other and they don’t want to see each other and they’ll trumpet each other. Then you pull them apart for a few hours and they start to miss each other. And then they see each other and run to each other.” If an elephant starts to trumpet—an angry gesture—during a performance, it is asked to leave the stage.

But typically, observed Soldier, the elephants are well-humored. They are even prone to trickster moves. One elephant, muses Soldier, “would constantly, every time I would turn around, would stick his trunk into my glass of water, and then when I turned around would take the trunk back and pretend he hadn’t done it. And he kept doing it over and over again, just having fun with me.”

And that’s playing nice. An especially devilish elephant may mock him by blowing water in his face. But in the end, an elephant will drop its rough tongue, as they love to have their tongues pet, as a sign of affection, “like a cat that likes to be scratched and kind of lowers its head” says Soldier.

Watching the elephant orchestra perform does more than simply entertain, Soldier insists. “It makes you have to reflect on things in a different fashion. It makes you think about our responsibility to their species.”

Watch the elephants jam with humans below.