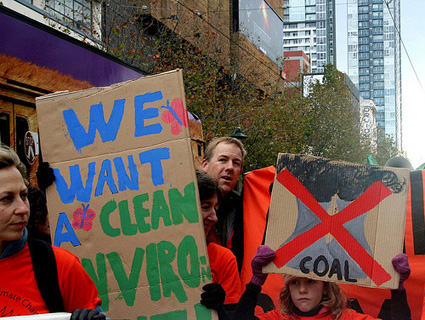 Three large energy companies have been carrying out covert intelligence-gathering operations on environmental activists, the Guardian can reveal.

The energy giant E.ON, Britain’s second-biggest coal producer Scottish Resources Group, and Scottish Power, one of the UK’s largest electricity-generators, have been paying for the services of a private security firm that has been secretly monitoring activists.

Leaked documents show how the security firm’s owner, Rebecca Todd, tipped off company executives about environmentalists’ plans after snooping on their emails. She is also shown instructing an agent to attend campaign meetings and coaching him on how to ingratiate himself with activists. The disclosures come as police chiefs, on the defensive over damaging revelations of undercover police officers in the protest movement, privately claim that there are more corporate spies in protest groups than undercover police officers.

Sir Hugh Orde, the president of the Association of Chief Police Officers, which until recently ran the secretive national unit of undercover police officers deployed in protest groups, said in a speech last week that “the deployment by completely uncontrolled and unrestrained players in the private sector” constituted a “massive area of concern”.

Revelations about Mark Kennedy and three other undercover police officers in protest groups caused a furore last month and led to four official inquiries into their activities.

Now a Guardian investigation has shed new light on the surveillance of green campaigners by private security firms whose intrusive operations include posing as activists on mailing lists and infiltrating full-time agents into campaign groups over many years.

Multinational companies, ranging from power producers to arms sellers, hire these firms to try to prevent activists running campaigns against them or breaking into their sites.

The leaked documents lay bare the methods of one firm, Vericola, run by 33-year-old Todd. Based in Canterbury, Vericola, according to Todd, is a “business risk management company” offering a “bespoke” service to clients “regarding potential threats” to their businesses.

Over the past three years, Todd, using different email addresses, has signed up to the mailing lists of a series of environ-mental groups organising major demonstrations such as the G20 rallies in London, demonstrations against E.ON’s Kingsnorth power station and the expansion of Heathrow airport, giving her access to communications and advanced notice of demonstrations.

Activists say she regularly attended meetings of an environmental group, known as Rising Tide, for around a year in 2007/08.

The documents also show her advising a colleague on how to fit in with the other activists at meetings held to organise future protests. One tip was that he should not mention he was flying to Germany as “obviously” the environmentalists “hate short-haul flights”.

Todd, who says she is not a corporate spy, told the Guardian that all the information she acquires comes from public sources such as subscribing to emailing lists through the websites of the environmental groups.

Despite emails revealing how she repeatedly tried to find ways for her agents to access protest gatherings, Todd denied her company “infiltrates” meetings of protest groups as they are open to any member of the public.

The environmental activists are angry that, by posing as a supporter, she has gained access to emails and meetings where tactics and strategies are discussed. Eli Wilton, a Climate Camp organiser, said: “It’s frightening that in a meeting about how to stop the fossil fuel industry, the person sitting next to you might be a spy paid for by the energy giants themselves.”

He said Todd and her colleagues “couldn’t have gotten subscribed without attending our meetings. These were internal lists where, for example, we strategised about how to stop new coal-fired power stations being built by E.ON.”

E.ON said it had hired Vericola and another security firm, Global Open, on an “ad hoc” basis as its executives wanted to know when environmentalists were going to demonstrate at or invade its power stations and other premises, as they had done in the past.

The E.ON spokesman said it asked Vericola only for publicly available information and if Todd and her colleagues had obtained private information, they had done so “under their own steam”.