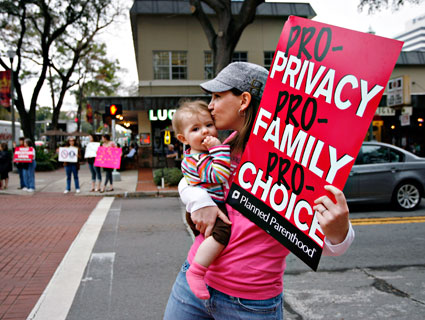 Capitol Hill’s abortion fight was already heating up, with skirmishes over federal funding for abortion, the effect of the tax code on abortion, and a controversial “forcible rape” provision. But on Wednesday, the Republican-led House of Representatives declared war.

A draft continuing resolution to fund the government, due out tomorrow from the House appropriations committee, will cut $327 million in family planning funding that goes to organizations like Planned Parenthood but that cannot be used to pay for abortions. This money, instead, is used to fund cancer screenings, birth control, and other health care services for poor people. The $327 million is the sum total of this sort of funding under current law. The House GOP is trying to zero out Planned Parenthood.

Critics of the funding contend that because money is fungible, these dollars are, in effect, paying for abortion services. Doug Johnson, legislative director of the National Right to Life Committee, said he’d “have to look at” the proposal before commenting, but groups that oppose abortion rights have long pushed for cutting this funding to Planned Parenthood and similar organizations.

The cuts are a victory for Rep. Mike Pence (R-Ind.), who has led the push for slashing all funding for abortion providers in general and Planned Parenthood specifically. “The fear of losing their federal funding has led [Planned Parenthood] to target me for my pro-life positions,” Pence wrote in a November fundraising appeal. “They’ve even named me to their 2010 Election Hall of Shame for advocating a pro-life agenda on Capitol Hill,” he said. “But I refuse to back down.”

Groups that back abortion rights, naturally, are upset by the House GOP’s move. The Republicans want “to take away birth control and cancer screenings from millions of American women and men,” Nancy Keenan, the head of NARAL Pro-Choice America, said in a statement. “While these politicians attack abortion coverage from every angle, they now want to deny funding for birth control, even though that’s the best way to prevent unintended pregnancy.” Cecile Richards, the head of Planned Parenthood, also released a statement. Highlights:

Unbelievably, the House Leadership has set its sights on abolishing a program that provides lifesaving and preventive care to millions of women and saves taxpayers money by helping women plan their families. This is an extreme proposal, and the new leaders of the House are pushing it forward at great risk to women and at their own political peril.

Richards also pointed to data that she says suggests that for every dollar that is spent on family planning services, taxpayers save $4 in other costs.

If this provision is in the final version of the House appropriations bill, which now seems likely, Republicans should be able to pass it out of the House with ease. Then the fight heads to the Senate, where abortion rights supporters will have to fight hard to strip the provision from the bill (called a continuing resolution). Because the government will shut down unless the continuing resolution is passed, supporters of abortion rights will have less room to maneuver than they might have otherwise. And if there is no veto threat from the president, their hand will be weaker.

This story has been updated and edited since it was first posted.