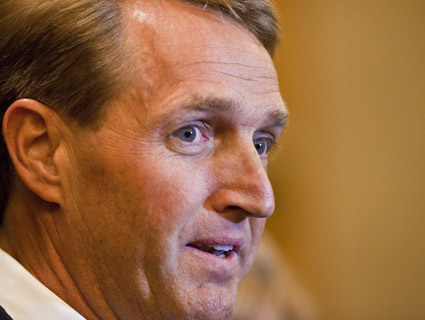 Rep. Jeff Flake (R-Ariz.) is running for the Senate seat that will be vacated by retiring Sen. John Kyl. | Zuma/Jack Kurtz

Rep. Jeff Flake (R-Ariz.) hadn’t even announced his bid for retiring Sen. Jon Kyl’s Senate seat when the first press releases attacking his unusually moderate views on immigration hit the newswires. Just after 1 a.m. on Monday—more than 12 hours before Flake officially launched his campaign—anti-immigration group Numbers USA blasted out a statement denouncing the congressman as “the Top Republican Amnesty Pusher in U.S. House.” Networking hub ArizonaTeaParty.com quickly posted the attack on its site.

Facing similar slams on immigration, Republicans like Sen. John McCain (R-Ariz.) have flip-flopped and swerved to the right on the issue. But in an interview with Mother Jones Tuesday, Flake held fast to his previous views on immigration and suggested that he’ll campaign as a social moderate—regardless of any blowback from the right.

In 2006 and 2007, Flake co-authored the STRIVE Act, an immigration reform bill that included a pathway to legalization for undocumented immigrants. When asked on Tuesday by Mother Jones whether he’d still support a pathway to legalization, Flake soft-pedaled his response but defended his previous views on immigration. “I’ve always felt that, like I said, nearly half of those who are here illegally didn’t sneak across the border. They came legally and have overstayed. So border security is the number one item, but you’ve got to do other things as well,” Flake said in an interview just off the House floor.

When pressed to clarify whether such measures would include a pathway for legalization, Flake agreed that “some mechanism” was necessary. “We’ve dealt with it before with a provision that required [undocumented immigrants] to go home and register,” Flake said, appearing to refer to a provision in the STRIVE Act that would give qualified undocumented workers a six-year work visa—but also required them to “touch back” and return to their home countries before being able to become legal residents. The congressman emphasized, however, that “nothing else is going to move” until Congress does more to strengthen border security.

Nevertheless, Flake’s outspoken views put him at odds with national Republicans, many of whom have swung hard right on the issue since the failure of former president George W. Bush’s immigration overhaul. Moreover, Flake’s remarks draw a sharp contrast with fellow Arizonan McCain.

Like Flake, McCain stepped forward during the Bush years to become one of the biggest champions of immigration reform, including a pathway to legalization. But challenged from the right in 2010 by ex-congressman J.D. Hayworth, McCain rapidly retreated from his previous positions on immigration. He adopted a hard line on that issue—along with a host of others—during his Senate primary.

Immigration hawks have already picked up on the contrast. “McCain abandoned his amnesty leadership and then distanced himself more from it in order to win re-election to the Senate in 2010,” writes Numbers USA president Roy Beck. “But Rep. Flake has not recanted any of his boosterism for amnesties.” And like McCain, Flake could face a primary challenge on the right. Hayworth has said he won’t run in the race to replace Kyl, but the notorious Maricopa County sheriff, Joe Arpaio, has been making noise about a possible campaign.

Flake is beloved by some on the right for his fierce fiscal conservatism and opposition to earmarks: He’s earned a 100 percent rating from the American Conservative Union and FreedomWorks, a national tea party ally, has already endorsed him for Senate. But in Arizona, immigration hardliners have long set their sights on the congressman.

Flake’s 2010 primary opponent, Jeff Smith, hammered the congressman for calling Arizona’s sweeping state-level immigration crackdown “imprudent.” Flake crushed Smith in that primary, 64-35. But a statewide primary could leave him more vulnerable: 88 percent of registered Republican voters supported the state’s harsh immigration law in a poll last year. Gov. Jan Brewer has kept the issue on the front burner, recently filing a countersuit against the federal government for its alleged failure to enforce immigration laws. (Flake declined to take a position on Brewer’s suit, saying that he “hadn’t had time to look at it.” He also declined to comment on Arpaio’s hard-charging immigration crackdowns.)

While dodging some contentious questions, Flake seems confident on the whole that his views on immigration and other social issues are in line with Arizona voters. His support for Don’t Ask Don’t Tell repeal and the Employee Non-Discrimination Act—which would protect LGBT workers—has brought on the wrath of social conservatives like the Concerned Women for America. When asked whether he still stood by such positions—and how he’d respond to such blowback—Flake simply stated: “As you might be able to tell, Arizona voters have a bit of a libertarian streak, an independent streak. I think they appreciate a politician who isn’t lockstep in any one way.”