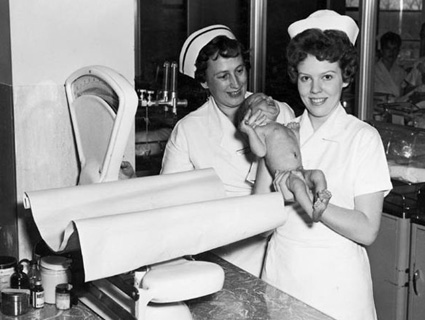 Sitting on an immigration panel at the American Conservative Union’s annual shindig, Kobach, who was recently sworn in as secretary of state in Kansas, told the CPAC crowd that he’s spearheading a new movement to eliminate guarantees of US citizenship for immigrant children born on American soil.

Kobach admits that such a proposal stands little chance on Capitol Hill, but he insists there’s an opening at the state level. He’s teaming up with the Immigration Reform Law Institute in an effort to encourage state legislation setting stricter parameters on who can become a state “citizen.”

Other foes of birthright citizenship have gone so far as to call for a Constitutional amendment, but Kobach sees a more promising path through the states, which he says have the authority to make “certain legal arrangements” that bear “the force of federal law.”

“We can’t change the way Congress define US citizenship, but we can conceive of ways to change how a state defines its own citizenship,” he told the crowd. And while he admitted that this was “maybe not the most important issue with regard to immigration,” he added that tearing down birthright citizenship was important if Americans wanted to remain faithful to their Constitution.

Republican leaders have sought to tamp down this inflammatory issue in the run-up to November 2012. Rep. Lamar Alexander (R-Texas), said he won’t make it a priority in the House Judiciary Committee, and he passed over Rep. Steve King of Iowa—a GOP flamethrower and avid birthright foe—for the chairmanship of Judiciary’s immigration subcommittee.

But Kobach and his fellow panelists made it clear on Thursday that the haters aren’t about to clam up. Panelist Mark Krikorian, executive director of the wonkish Center for Immigration Studies, proclaimed that his “skepticism” about the relevance of birthright citizenship was partly erased by a recent trip to the Arizona border. There he heard tell of a Mexican woman whose water broke as she was being lowered over the border fence. She gave birth to twins, Krikorian said. He went on to claim that the same woman had crossed the border a year earlier to have triplets. “This is an important issue,” he concluded.

The discussion evoked another hobbyhorse of the conservative fringe—the birther conspiracy theory. “Speaking of birth certificates, in some states, you can’t even find them!” joked panelist Dino Teppura of the Indian-American Conservative Council.

After the event, Teppura, a DC lawyer, told me that his concerns about Obama’s birth certificate weren’t just a joking matter. “Personally, I just don’t understand why they don’t put a copy of it somewhere on the Internet,” he said. “It would be a nonissue if I knew there was a copy somewhere.” He emphasized that he believes Obama was born in the US, and that Hawaii officials’ refusal to dig up a hard copy “is probably just a paperwork issue.”

Teppura added that he was born in Denmark before his parents came to America. Nevertheless, he shared the birthers’ concerns about lack of documentation, and he insisted that birthers have been demonized unfairly. “Just to question the presence or lack of it shouldn’t put you in the light of—you’re an extremist or you’re anti-Obama or something. It’s a reasonable thing just to say: Why can’t we just see a copy?”

Kobach is also known for cracking a few birther one-liners. At a 2009 GOP gathering, he joked that what Obama and God had in common was that neither had a birth certificate. But unlike Teppura, Kobach quickly objected to the notion that he was a birther. “Until a court says otherwise, I’ll assume he’s telling the truth,” he said.

Elsewhere at CPAC, immigration hawkishness and birther humor also went hand in hand. On Thursday morning, freshman Rep. Raul Labrador (R-Idaho)—a Puerto Rican, anti-amnesty conservative—delivered the event’s first official joke on the topic. “I was fortunate enough to be an American citizen by birth and I have the birth certificate to prove it,” he told the crowd.