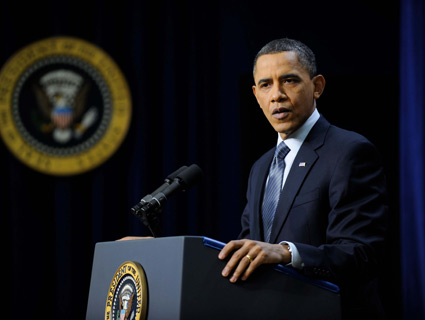 On Wednesday, Senate Democrats took an unusual step: They attacked House Republicans. The Dems released a report decrying House GOPers’ proposed spending cuts of $61 billion, noting that this measure would lead to the dismissal of 3,000 police officers and 65,000 teachers and the removal of 218,000 children from the Head Start program. Denouncing these “extreme cuts,” Sen. Chuck Schumer (D-N.Y.) declared, “If we follow the House Republicans’ roadmap, it will lead the country over the cliff.”

Compare this response to President Barack Obama’s reaction to the GOP’s proposed cuts. At a press conference on Tuesday, the president, who was promoting his just-released budget plan for fiscal year 2012, was asked about the Republicans’ desire to “start cutting now.” The president replied that his “goal is to work with the Republicans” on the current spending measure, but he said that he opposed “steps” that would “prompt thousands of layoffs in state or local government” or impede “core vital functions of government,” for that would “have a dampening impact on our recovery.” He also noted that “further slashes” in military spending “would impair our ability to meet our mission.”

It was a subdued response. Obama did not denounce the Republicans for placing the nation on the road to ruin, as did the Senate Democrats. He did not decry any specific cut. He did not take the occasion to present any larger point, such as how the Republicans are once again handing deficit-expanding tax cuts to the wealthy and looking to balance the budget by shrinking programs for low- and middle-income Americans.

The next day, at White House Press Secretary Jay Carney’s debut daily briefing, I asked about Obama’s low-key opposition to the GOP cuts:

The president’s response to the Republican spending cuts seems to be a little muted…These cuts would be in the SEC, the FBI, climate change, global health, and [Obama] hasn’t really seemed to go after [them] as a package and to have a sort of a political and philosophical discussion with Republicans about their view of government versus his. [He’s] focusing more on entitlement reform than these spending cuts. Why is that?

Carney replied, “I disagree with that.” He repeated the White House’s standard line about the budget deliberations: “This is the beginning of a process. He’s committed to cutting spending and reducing the deficit, and that’s why he put forward a tough budget…He’s made very clear that those investments are important and protecting those investments are important, because we do not want to create a situation where we stymie economic growth or limit our ability to create jobs.”

Without getting into specifics, I think that the President has made clear that he doesn’t—we cannot support arbitrary or irresponsible or deep cuts that undermine our ability to grow the economy or create jobs, win the future, or harm our national security or other essential functions of government.

Clearly, the president opposed the GOP cuts. Yet Carney didn’t even mention that on Tuesday the Office of Managemnet and Budget had issued a statement noting that Obama would veto the House Republican spending bill if it contained these deep cuts. Still, the White House was not looking for a high-profile fight over the House Republican effort to slash non-discretionary funding covering scores of government services.

There are several reasons why Obama would pass up the chance to bash cop-firing GOPers. The White House this week is focused on the winning-the-future message it has wrapped around Obama’s budget proposal. Note how Carney first turned my question about GOP spending whacks into a mini-ad for Obama’s cut-but-invest budget. White House aides would rather not get pinned down in a mud-wrestling match over the GOP proposed cuts in the pending spending bill. They are literally looking to win the future politically by emphasizing a larger story: Obama will cut spending to lower the deficit and boost programs that will lead to economic growth down the road.

The president also is striving to be Washington’s adult-in-chief, talking up the need for bipartisan negotiations and the potential for agreement across party lines. He’s ceding the politics of defiance to the Republicans. This could well be because his approval ratings have ticked upward since he hammered out the bipartisan tax-cut deal with the Republicans in December. He seems to be content to let the Republicans be the food-fighters, so he can position himself as a rise-above-them leader—which, presumably, will enhance his appeal among independent voters.

But there’s something else: recent public opinion polling. At a retreat of Democratic senators last week, Democratic pollster Geoff Garin presented bad news: Republicans had gained the edge in the debate over government spending. Voters, especially independents, he told the Dems, care first and foremost about improving the economy, but they believe the better way to do so is by cutting spending, not investing. That is, many voters have accepted the GOP’s fundamental talking point.

If that’s true, Obama and other Democrats facing reelection in 2012 have to be careful about coming across as opposing spending cuts. Garin’s polling, according to Bloomberg, did show that voters do not fancy spending cuts in law enforcement, education, and medical research—actually the sort of cuts House GOPers are pushing. This might suggest that Obama could score politically by confronting Republicans over these cuts (in similar fashion to the way President Bill Clinton won the showdown with the Newt Gingrich-led Republicans in the 1990s over GOP-desired spending cuts). But this polling also indicates that voters view spending cuts in general as the path to economic recovery and trust the Republicans more than Obama when it comes to dealing with the budget deficit.

So Republicans could be vulnerable politically if voters come to believe they are cutting too much, but Obama and the Democrats could lose out, if voters (especially indies) don’t believe they are truly committed to spending cuts. Consequently, Obama has a fine line to tread. He must oppose the Republicans’ deep cuts without doing so in a way that would cause voters to question his commitment to more prudent cuts. Such a stance demands political finesse. The GOP, though, has a rather simple message: government spending is bad for the economy, so cut, cut, cut, and cut again. The Obama argument is three-fold: some government spending has to be decreased; much spending is necessary (though it can be spent more efficiently); and in several areas, the government must spend more for a future payoff. In the budget fights ahead—if the tussle does boil down to bumper sticker versus nuanced explanation—the adult in the room may not have the advantage.