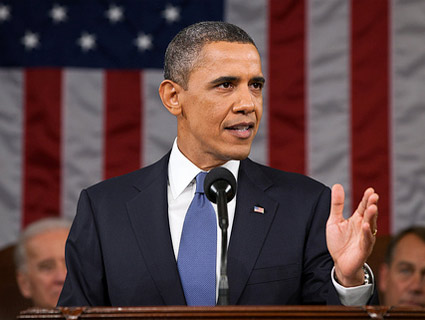 Winning the Future—that’s the new watchword of the Obama White House. It was the core message of President Obama’s recent State of the Union address, and it’s the motto for the federal budget the administration has just released. But what about the here and now?

At a White House press conference on Monday afternoon, Jacob Lew, Obama’s budget director, briefed several dozen reporters on the ins and outs of the budget. His major sales pitch was that the budget prudently saves money (by reducing deficits by $1.1 trillion over the next ten years) and wisely invests money (by increasing spending on education and R&D). Lew’s tag line: “we can live within our means and…we can invest in our future.” He said that several times.

There were plenty of questions from the assembled reporters about the administration’s calculations, about baselines, about the president’s reluctance to propose cost-savings in Social Security. (Lew noted that Social Security is not contributing to the nation’s deficits at this point and that this is “not an urgent moment” regarding the public retirement program.) Not many questions, though, were aimed at how the Obama administration’s proposed budget will directly affect Americans now contending with the country’s economic troubles.

A reporter from the Boston Globe did inquire why the administration proposes to invest in wireless internet technology while cutting $2.5 billion or so from the program that provides heating assistance to the poor and elderly. In other words, do seniors and low-income Americans have to freeze next winter so the administration can spend billions on a wireless initiative? Lew noted that this spending reduction was “a very hard cut.” He explained that the heating-assistance program (known by the acronym LIHEAP) doubled in size after energy prices spiked in 2008 and should not continue at that level. He added that he had helped create this program years ago, when he worked for House Speaker Tip O’Neill, and that it was designed to be a grant program, not an entitlement program, meaning the feds each year are supposed to figure out each year how much they can afford to hand to cash-strapped states. And the wireless initiative, he said, is part of the administration’s crucial winning-the-future agenda. Lew did look pained to be rationalizing this particular cut.

Minutes later, I posed a similar, but broader, question. Noting that the administration was wrapping up the budget with its win-the-future rhetoric, I asked, if one of the millions of unemployed Americans were to look at this budget, what might he or she see that would provide direct assistance in the near-term? Lew replied by first pointing to the December tax-cut deal Obama struck with congressional Republicans, noting that it extended unemployment benefits. He referred to that agreement as a “very important backdrop” to the White House’s proposed budget.

But what about the proposed budget itself? Lew cited the billions of dollars in spending increases for infrastructure, noting that the administration was looking for projects that could start quickly, “with a an eye to creating immediate opportunity.” He didn’t say much more about immediate job-creation.

It seems the administration has concluded that after that tax-cut deal—which did amount to something of a second stimulus—there is not much else the White House can do via government spending (or tax cuts) to create jobs, especially with Republicans controlling the House. A recovery—though anemic—is underway. (At the press conference, Austan Goolsbee, the chairman of the President’s Council of Economic Advisers, noted that economic growth tends to average 4.2 percent in the five years following a reception, but the White House is forecasting only 3.8 percent growth in the current post-recession period.) But the president and his aides appear to be holding on to the hope that this recovery will make the next year or two (until Election Day 2012) sufficiently less awful than the past two and yield a political environment amenable for reelection.

Thus, the focus on the future, rather than job-creation right now. (Perhaps Obama should swipe the Bill Clinton theme song that featured the chorus: “Don’t stop thinking about tomorrow.”) It is good policy to be looking ahead. Such a stance also directs political attention from the economic difficulties of today, which might indeed be beyond the president’s reach. Yet all of this looking ahead is unlikely to offer solace to folks out of work at this moment. Will they appreciate that Obama is trying to nudge the slow-to-change economy in a better direction, as he faces harsh challenge from Republicans, who these days have one thing in mind: slash  the government? And Will their appreciation—or lack thereof—be a factor in the next election?

The consensus of White House reporters is that the proposed budget, like most, is a political document that was chiefly designed to give Obama the best shot at winning reelection next year. True or not, until then, there won’t be any telling if Obama’s emphasis on the future is good for his own.