This week, I’m reporting from outside Savannah, Georgia, on my first-ever hunting trip. We’re after invasive feral pigs, which have proliferated over the last decade in much of the southeastern US, competing with native species for food and wreaking havoc on land with their rooting. I’m hanging out with Jackson Landers, who aims to whet American appetites for invasive species like hogs, lionfish, geese, deer, and even spiny iguanas by working with wholesalers, chefs, and restaurateurs to promote these aliens as menu items. Read “Feral Pig Diaries Day 1: Moonshine and Teen Swine” here, and “Feral Pig Diaries Day 2: Do Hogs Like Supermarket Danishes?” here. My introductory post (wherein MoJo takes a field trip to the shooting range) is here. A word to the squeamish: The Feral Pig Diaries do contain a few graphic images.

After having seen zero pigs (well, except a dead one) during the first few days of my Feral Pig Diaries project, I couldn’t wait to get to Ossabaw, a mostly uninhabited island, 20 miles off the coast of Savannah, with a major hog problem. Ossabaw’s 26,000 acres of dense forest, salt marshes, and sand beaches is usually closed to the public, but the Georgia Department of Natural Resources was nice enough to arrange a trip out so I could see the pigs and the trouble they’ve caused firsthand. 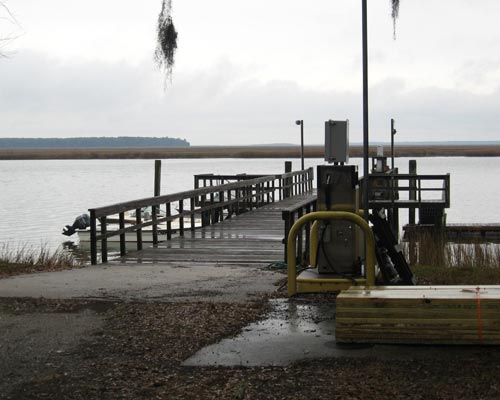 My friend Caroline and I set out early from her parents’ place, just outside Beaufort, South Carolina, and met David Mixon and Ed Van Otteren, both biologists from the DNR, in a supermarket parking lot. We followed them to this dock, hidden away at the end of a winding drive in the tiny coastal community of Pin Point, Georgia (birthplace of Clarence Thomas!). 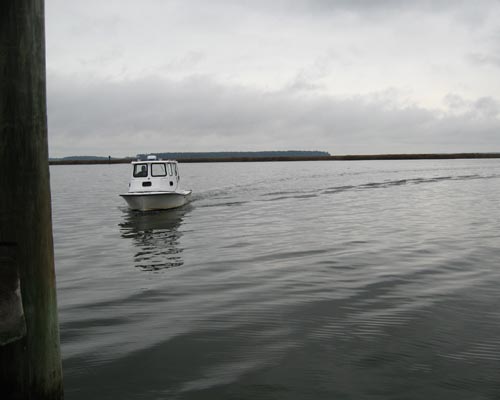 We made the 20-minute trip to the island in this little boat, threading our way between barrier islands, where the Ogeechee River empties out into the ocean.

The day was cold and damp, but we hardly noticed since we were busy gawking at the birds: cormorants, horned grebes, bufflehead ducks, and a whole mess of scaups overhead that changed direction with the wind every few seconds. Especially cool was a bald eagle perched on top of a pole on a marshy island (left.)

Also cool was the driver of our boat, DNR wildlife technician Andy Meadows (right), who has lived on Ossabaw for 11 years. His only (human) neighbors are a few other DNR staffers (including a full-time hog shooter) and 98-year-old Eleanor Torrey West, the only remaining member of the family from which the DNR purchased the island. “Miss West,” as she’s known, lives in a mansion on the island’s north shore, where she keeps a pet hog named Paul Mitchell, named (I kid you not) after the hair products guy because it has a cowlick.

I asked Andy if there was a good chance we’d see a hog, and he assured me that he sees them every day. Although pigs were first introduced to the island in the 1500s by Spanish settlers, Ossabaw’s current hog population is the result of centuries of mixing with domestic pigs. Ossabaw wasn’t always uninhabited; it was farmed till quite recently. At one point before the Civil War, the island held four cotton plantations and 1,200 slaves.

Once docked at the island, we climbed into a truck with Andy, and David and Ed followed in another truck behind us. From a narrow causeway, we saw a marsh full of bird action: great blue herons, snowy egrets, wood storks, wood ducks, oystercatchers, and one little pied-billed grebe who was making a racket. After the jump: a gory-ish image (but it’s not too bad).

We headed deep into the forest on a dirt road flanked by live oaks and palmettos. After a few minutes, we got out to look for what Andy calls “pigloos,” dried grass and palmetto fronds that the pigs push into piles with their nimble snouts. “You can kinda go up to one and kick it,” says Andy. “You hear it grunt and get ready to shoot.” (The DNR has a shoot-on-sight policy for hogs.) We didn’t see a pigloo, but Andy pointed out holes and piles of decaying fronds and leaves, the handiwork of rooting piglets, “roving bands of juvenile delinquents,” as Andy put it. The ground looked like a weird subtropical moonscape: 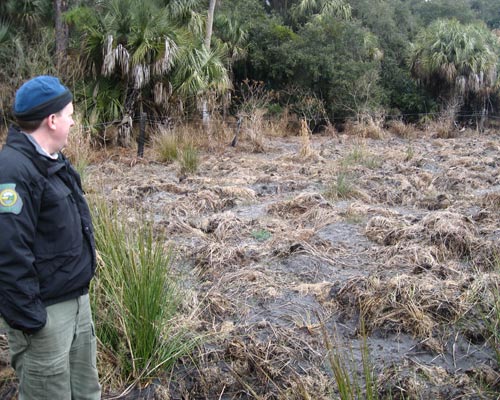 “Nothing else has room to grow when you have pigs around,” he said. The hogs’ only natural predators on the island are alligators (I was sort of hoping to witness a hog-vs.-gator showdown, but it was too cold for gators and Andy said he’d never seen such a thing anyway). And hogs are not picky eaters: In the winter, they feed on acorns, palmetto berries, and whatever other protein sources they can dig up, but in the springtime they head to the beach, where they like to dine on the bycatch from shrimping boats. Their favorite treats, though, are the eggs of threatened loggerhead turtles. In the spring, during turtle nesting season, the DNR sets up hog traps on the edge of the beach to catch them before they can get to the turtle eggs. 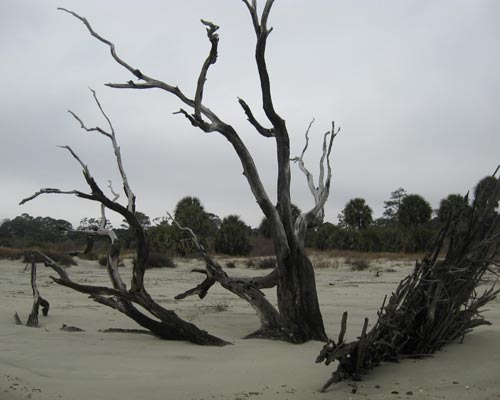 We emerged from the forest onto the coast, and the truck bounced and shook on the low dunes. Hogs often hang out on the beach, but not today. I couldn’t blame them: It was 40 degrees and rainy. Not exactly beach weather. 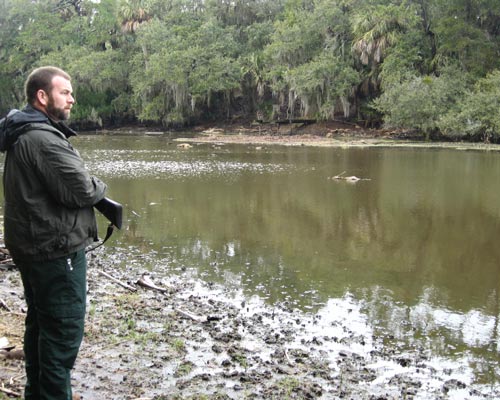 Next we circled back into the forest to a little body of freshwater called Hog Pond. As you can see above, David came prepared. It’s hard to say how successful the DNR staffers’ shooting and trapping efforts are, since no one knows exactly how many pigs are on the island, but they’ve reduced turtle egg depredations considerably. In addition, the agency runs seven public hunts every year. Hunters apply through a lottery system: Ossabaw Island hog is supposed to be especially delicious (though Andy thinks this is a myth—”Yeah, I’ve tasted it, and it pretty much tastes like pork”), so it’s fairly competitive: Your odds of getting selected are only a little better than getting into a really good college: Usually about 400 hunters apply for 70 spots.

We drove on. Andy pointed out a nine-banded armadillo digging for bugs and grubs in the woods: 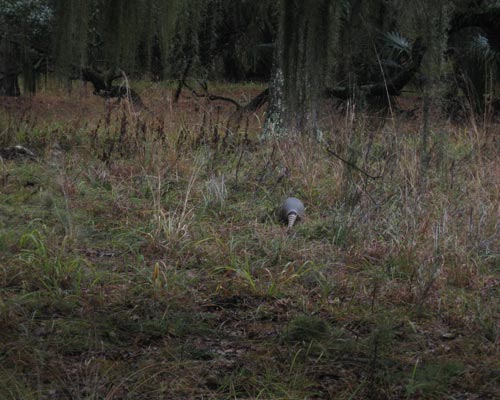 I was psyched, since Jackson and I hadn’t had any luck armadillo hunting (yes, these guys are invasive, too) on country roads outside Savannah the other night, though I resisted the temptation to leap from the truck and grab this guys as Jackson might have done.

I had all but given up hope of a pig sighting when I spotted them: A group of five or six small hogs rooting under the palmettos. For a split second of silence, a little black-and-white pig and I stared at eachother. “Hog,” I whispered. Andy stopped the truck and motioned to the David and Ed behind us. Before I had time to so much as get out my camera, David had gotten out with his rifle, aimed, and fired. With a single head shot, he killed this piglet: 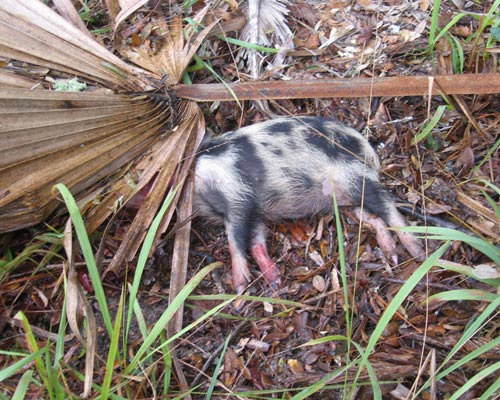 Not exactly a fearsome monster of muscle and jaw. In fact, my friend Caroline observed that he was significantly smaller than her miniature poodle. But this isn’t hunting for sport: The goal is to get rid of the pigs, and no one gets a pass for being cute. As much as I reminded myself that this piglet was a future turtle-egg-chomping disaster, though, I couldn’t help feeling sad.

We left the dead piglet in the woods. It’s too expensive for the DNR to make pork chops out of all the pigs they kill, so they cover them and let the vultures and bugs have their way. I asked Andy whether he ever considered partnering with restaurants, like Jackson wants to do: Surely some enterprising chef would like to claim this free meal. But Andy doubted the idea could work on a large scale; he thinks it would be too expensive to transport and refrigerate the meat all the way to a restaurant on the mainland.

It was getting late, and we were all cold and hungry, so we headed back to the dock, boarded the boat, and rode back to the mainland.

Waiting for us in Caroline’s parents’ fridge was a shoulder of the hog Bob had shot during the hunting portion of my trip a few days ago. (Bob and Jackson generously shared with me; we carved my piece off in the parking lot behind the hotel before I left.) Caroline’s mom Marianne roasted the shoulder in a rich, sweet barbecue sauce with onions, butter, and thyme. The meat came right off the bone. We fixed ourselves pulled-pork sandwiches for dinner. 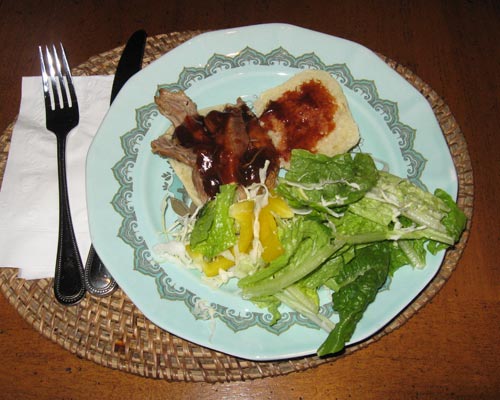 Since I’m usually a vegetarian, I don’t exactly know from good pulled pork, but I thought it was delicious (even better than the hamburger I ate for research purposes last year): Tender, dark, smokey, and sweet. (Caroline and her parents, all meat-eaters, agreed, and pronounced it not gamey.)

Want some? If Jackson Landers has his way, this invasive sandwich might soon make an appearance on a menu near you.