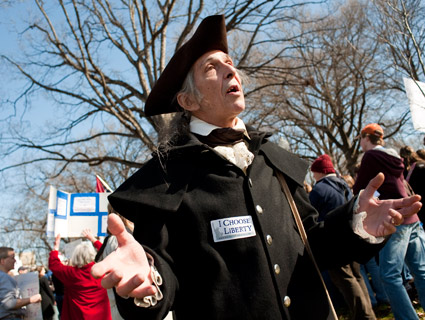 The nation’s largest tea party group, Tea Party Patriots, made a name for itself through raucous protests demanding more government transparency and fiscal responsibility. But the high standards of transparency and financial restraint that TPP’s leaders expect from the Obama administration don’t seem to apply to their own organization, a Mother Jones investigation has found.

TPP leaders have used dodgy accounting tricks to avoid publicly disclosing financial information. They’ve refused to share this information with the group’s members. Tea partiers who’ve tried to pierce the veil of secrecy have found themselves threatened with lawsuits or shut out of the organization entirely. And the group has tried to buy the silence of former employees and disillusioned board members, offering sums as high as $20,000 to sign confidentiality agreements. (National TPP coordinators did not respond to requests for comment for this story.)

TPP has proven highly adept at raising money, and it has hired a team of high-priced PR consultants and GOP-connected direct-mail and telemarketing firms to give the group even more fundraising firepower. Yet it has failed to complete the simple bookkeeping chores required of a well-managed charitable organization.

TPP claims it is a 501(c)(4) entity. That means the group does not pay taxes, but donations to the group aren’t tax-deductible. Yet despite raising millions of dollars since its founding in February 2009, TPP has not even applied to the IRS for such official status, according to a TPP spokesman. And the IRS confirms that it has not filed paperwork that would reveal basic information about its finances.

The IRS allows nonprofits like TPP to bill themselves as tax-exempt before they’ve received official approval, but they are still required to file tax forms—what are known as 990s—publicly disclosing how much money they’ve raised, how much top staff members are paid, and generally how its funds are spent. One glance at a 990 can often distinguish a bad nonprofit from a good one by showing how much the group invested in actual program expenses, as opposed to administrative costs like salaries and other overhead.

TPP first ratified its bylaws in February 2009 and was incorporated in Woodstock, Georgia, that June, self-identifying as a 501(c)(4). Under standard charitable organizational practices, TPP would have filed a 990 last April or (with an IRS extension) by November 15, 2010. It didn’t. Instead, Randy Lewis, a spokesman for the group, says that TPP has declared a May 31 end to its fiscal year. This means that under IRS rules, TPP won’t have to file its first tax form for the 2009 tax year until April 15, 2011, more than two years after its inception.

There’s nothing illegal about what TPP is doing—but it’s certainly not the action of an outfit that welcomes public scrutiny. Marcus Owens, a DC tax lawyer with the firm of Caplin & Drysdale, who served for 10 years as the director of the Exempt Organizations Division of the IRS, says that shifting the tax year is an old trick used by political groups to delay disclosure. He noted that the IRS has said that one of its goals this year is to crack down on this type of foot-dragging by charities in light of all the anonymous money flooding the political system.

TPP’s opaque operations have raised the suspicions of some tea partiers who have accused the group’s leaders of hypocrisy—preaching transparency and preventing it at the same time. “You’d think they’d lead by example, you’d think they’d open their books and not hide behind their tax status,” says Laura Boatright, a former TPP regional coordinator in southern California who’s become one of the group’s loudest critics.

While TPP hasn’t deployed its significant resources to get its books in order, many smaller tea party groups it counts as affiliates have. At least one—the North Houston Tea Party Patriots—has posted its financial information on its website for anyone to see. “All over the country, small tea party groups are playing by the rules,” says Florida tea party activist Robin Stublen, who served as a TPP state coordinator before becoming disenchanted with their lack of transparency. “If [TPP] hasn’t filed their taxes, quite frankly, that’s outrageous.”

Even the Tea Party Express, which TPP national coordinator Mark Meckler has derided as an Astroturf group because it’s run by a handful of California political consultants, has been more transparent than TPP. Tea Party Express, a political action committee, has come under fire for raising significant funds from tea partiers that went back to the consulting firm that organized it. But one reason activists were able to criticize the organization is that it had reported its expenditures to the Federal Election Commission, as required by law.

TPP’s opacity has left local organizers and even some former staffers in the dark about what’s happened to the millions of dollars the group has raised over the past two years. This has fueled suspicions about how Meckler and fellow national coordinator Jenny Beth Martin are spending the money—and whether they are exploiting the tea party movement for personal gain. Martin said last summer that she was making $6,000 a month for her work. But activists have been unable to officially confirm her salary or Meckler’s. Asked late last year by Mother Jones, Meckler refused to say how much he’s being paid, though such information is legally required to be disclosed on a charity’s tax forms.

“You are taking money out of the pockets of local groups and spending it on what? Rallies, hotels, airplanes so Mark and Jenny Beth can fly around and talk to potential donors? It’s ridiculous.”

To local tea party activists, Meckler and Martin appear to be living large (even as they churn out op-eds bashing Republicans for not doing enough to cut the budget). They did little to dispel such notions in October, when the pair jetted across the country in a private plane to whip up the tea party faithful ahead of the midterms. Recently, they launched their own slick personal websites highlighting their tea party leadership and media appearances—sites that are separate from the national group’s website and have all the trappings of the work of image consultants.

“They’re acting just like the regular GOP does,” say Joy McGraw, a former Georgia state coordinator for TPP who spent some time in DC with its national leaders. “They received a million in donations; they flew around in a private jet. Every time they stayed in DC, they stayed in the Hyatt. They were eating like kings and queens on donated money.”

TPP’s honchos don’t take kindly to questions about how they are spending the group’s money, either, as California tea partier Cindy Chafian discovered the hard way. During one of the group’s weekly webinars last fall, Chafian, the co-coordinator of the Chino Hills Tea Party, asked some pointed questions about why the group wasn’t more forthcoming about how it spent the $1 million donation. Afterwards, her tea party group was deleted from the TPP website and she was blocked from further calls. She subsequently sent a letter to TPP’s board raising her concerns. In it, she wrote:

When I think of what a LOCAL GROUP could do with that money it really makes me angry. There are many groups who are struggling just to keep their heads above water; your organization should be encouraging them to keep their money local. Instead you are taking money out of the pockets of local groups and spending it on what? Rallies, hotels, airplanes so Mark and Jenny Beth can fly around and talk to potential donors? It’s ridiculous. TPP relies on DONATIONS from it’s members to survive…for you to waste that money is completely unacceptable.

In return she was threatened with a lawsuit by one of the board members, Debbie Dooley, who in an email called her allegations slanderous and said, “I can tell you that if you go public with these lies, I will obtain an attorney personally for myself and seek legal action against you. You are way off base and I am glad you are no longer associated with TPP.” Dooley did not responded to questions from Mother Jones.

Scott Boston, TPP’s onetime national education coordinator, says he, too, pressed for answers about the group’s finances—and was pushed out of the group as a result. Boston says he was offered a severance package that was contingent on signing a nondisclosure agreement. He declined to sign.

Rob Gaudet, TPP’s former chief technology officer who created the group’s website as well as many of its related software applications, was also forced out of the organization last fall. (TPP says he refused to follow orders about server management; Gaudet says he was ousted for criticizing the top leadership and its management.) TPP offered him $20,000 to keep quiet, he says. Like Boston, he declined.

“Any time anybody asks about the money, you’re immediately labeled as a problem or an adversary,” says Boatright, the southern California tea partier. “They act like you’re a troublemaker just for asking.”