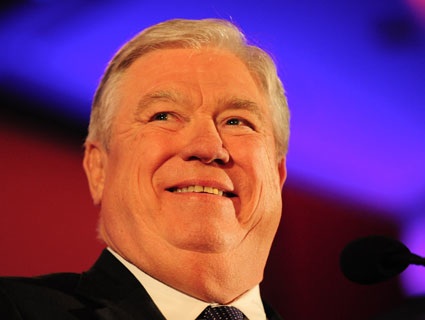 [UPDATE: A spokeswoman for Mississippi Governor Haley Barbour has responded to this story. Read that here.]

On Monday afternoon, in a speech to the Chicagoland Chamber of Commerce, Mississippi Gov. Haley Barbour unleashed a searing attack on President Barack Obama, blaming him for “explosive spending, skyrocketing deficits, gargantuan debt, calls for record tax increases, government-run health care, out-of-control regulations, and anti-growth energy policy.” He highlighted his home state of Mississippi as a model of fiscal responsibility, boasting that “we dug out of a $720 million budget hole in two years without raising anybody’s taxes.”

In Chicago and elsewhere, this likely contender for the GOP’s 2012 presidential nomination paints himself as a classic anti-tax Republican. And he has regularly claimed that he balanced Mississippi’s budget without tax hikes. The reality is very different. Throughout his eight years as governor of what’s now the poorest state in the union, Barbour has raised taxes half a dozen times, on everything from cigarettes to businesses to care facilities for the mentally disabled. (A spokeswoman for Barbour declined to comment.) And in balancing Mississippi’s budget, he’s cut deep into essential public services, including public education, offering a glimpse of where a President Barbour might place the scalpel. “He continues to say he’s balanced the budget without raising taxes. It’s not just true,” says Cecil Brown, a Democratic state representative in Mississippi. “But he thinks if he says things enough, they become true.”

A History of Hikes

Mississippi’s health care industry provides a telling look at the gap between Barbour’s rhetoric and his record. In 2003, before Barbour came into office, the state’s tax on hospitals totaled $1.50 per bed per night, and the daily bed tax for nursing homes and care facilities for the mentally disabled was $4. All that changed under Barbour. In 2004, he hiked the daily bed tax to $6 for nursing homes, children’s psychiatric facilities, and care centers for the mentally disabled. In 2005, he signed a bill more than doubling the hospital daily bed tax. And in 2009, Barbour approved legislation that effectively increased taxes on Mississippi’s approximately 110 hospitals by between $60 million and $90 million to make up for a $90 million shortfall caused by a reduction in federal funding, according to Michael Bailey, senior vice president of the Mississippi Hospital Association.

In the years before the 2009 deal, Barbour had tried to impose a revenue tax on Mississippi’s hospitals to fill that $90 million shortfall.* But Democrats and Republicans in the Mississippi legislature rejected that proposal, which Barbour insisted wasn’t a new tax (he said he was merely reinstating a tax from years past.) The health care industry disagreed. Bailey says Barbour’s revenue tax was indeed a new one, and would have added an additional $225 million in taxes for the state’s hospitals. Ultimately, those hardest hit by new taxes have been sick people who use hospitals or nursing homes because the added expense is passed on to them, Bailey explains. Pointing to Barbour’s record, he says, “It’s a pattern of trying to balance the budget by raising taxes on sick people.”

In May 2009, facing a revenue shortfall of $400 million, Barbour signed into law the first of two cigarette excise taxes, nearly quadrupling the rate from 18 cents a pack to 68 cents. Then, in July, Barbour levied a 25 cents-a-pack tax against cheaper cigarettes. At the time, the increases were viewed as a way to bring Mississippi’s cigarette taxes on par with other southern states and generate revenue for the chronically cash-strapped state. But earlier this year, Barbour insisted that wasn’t case: “We did it for health reasons, not budget reasons.”

Little noticed in 2010 was a tax buried in Barbour’s “Equity and Solvency Bill,” legislation intended to bolster the unemployment insurance trust fund in Mississippi. For businesses, the bill was a mixed bag. According to Ed Sivak, director of the Mississippi Economic Policy Center, while the bill sought to build up the state’s unemployment fund and lower the tax burden on new businesses, it also increased unemployment taxes—from a maximum of $378 per worker to $756—on businesses that lay off workers.

The Cost of Balancing the Budget

Since he joined the list of potential GOP contenders, Barbour frequently brags of eliminating the deficit that he inherited. (Mississippi is required to balance its budget each year under a state constitutional amendment.) But to balance Mississippi’s budget, Barbour has cut deep into popular, vital public services.

In particular, Barbour has slashed funding for Mississippi’s public schools. Since becoming governor in 2004, Barbour and the Mississippi legislature have set aside far less money than requested by the Mississippi Adequate Education Program (MAEP), the main funding formula for the state’s public schools, in every fiscal year but one, according to state data. In the most recent fiscal year, the shortfall for MAEP totaled $232.6 million. All told, the Barbour administration has underfunded Mississippi schools by $520 million.

Barbour’s proposed budget for the upcoming 2012 fiscal year follows the same path. He recommends reducing funding for Mississippi’s colleges by 3 percent, and 4.5 percent for K-12 schools. And Mississippi students have not fared well: Last year, high school graduates, on average, scored so low on the ACT standardized test that they failed to meet the minimum score to be considered ready for college.

In a set of rankings by Forbes magazine, Mississippi ranked 48th of 50 in a list of the “Best States for Business and Careers.” In the ranking breakdown, the state came 49th in labor supply, 49th in economic climate, and 48th in overall quality of life. “When you look at what’s needed to grow an economy, it’s an educated workforce,” says Sivak of the Mississippi Economic Policy Center. “In many ways, I have serious questions about how far we’ve set ourselves back by not making sure our kids have an education in Mississippi.”

In the end, critics say Barbour’s economic claims—whether it’s not raising taxes or building Mississippi into an economically thriving state—have little connection to reality. “He’s raised taxes, made budget cuts, laid off people, used up reserve funds, and he wants to say he’s got this budget magic,” says Cecil Brown, the Mississippi state representative. “Well, there’s nothing magic about that.”

UPDATE: In an email, Barbour spokeswoman Laura Hipp defended the various tax increases approved by Barbour. She says hospitals asked to pay more in bed taxes “to ensure there was not a reduction in benefits.” Taxes on nursing homes, children’s psychiatric facilities, and care facilities for the mentally disabled, she says, “were raised with the support of long-term care facilities.” And increased taxes on cigarettes were “a matter of health policy” and at the recommendation of a commission appointed by the governor. “When the Legislature convened, he suggested raising the cigarette tax from 18 cents to 42 cents,” Hipp writes. “The Legislature passed a 60-cent tax, and the Governor signed it.”

* This sentence has been clarified to reflect that the revenue tax proposal was intended to fill the same $90 million shortfall as the 2009 tax that became law.