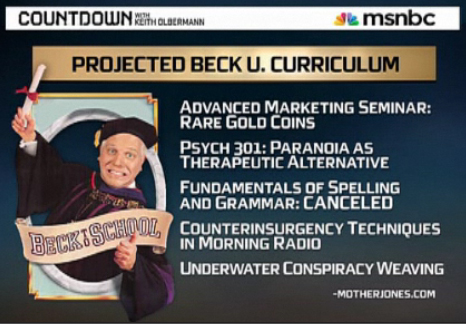 [Update: Friday afternoon, I spoke with Angelo Carusone of the @StopBeck effort, who has serious misgivings about some of this post. Click here to read the excellent points he made.]

Over at his corner of the site, Kevin Drum today discusses what he calls the “Glenn Beck Vortex,” which has a couple of premises: that America’s favorite bonkers TV entertainer has seen his day come and go; that he’s scraped the bottom of the barrel in terms of producing Byzantine conspiracy theories; and that journalists who cover him do so at the risk of their own sanity. Can’t argue with any of that. But coming on the heels of Beck’s latest abysmal ratings report, it got me thinking: Is it actually concerned liberals who are keeping the Beckapalooza afloat? The numbers suggest it may be so.

Here’s the salient fact: Less than one-quarter of Beck’s viewers are ages 25 to 54. Assuming the number of youngs who watch him is negligible—a pretty safe assumption, I think—that means that dang near to 80 percent of his viewership is in or around senior-citizen territory. Perhaps it’s no surprise that the olds like Beck. But it gets me wondering: Who exactly makes up that 25 to 54 demographic?

This may be my media insider/progressive bias showing, but working in social media and on the interwebs, I know a lot of folks in their twenties, thirties, and forties who watch Beck just to get their angry on monitor his content for facticity and sanity. This includes @StopBeck and the other folks at Media Matters, The Nation, The American Prospect, et al; the hard-working writers of the Onion, The Rachel Maddow Show, The Colbert Report, and The Daily Show; pretty much all of the thousands of folks in my Facebook, Twitter, and Tumblr feeds; and, on rare occasions, yours truly.

Hardly a scientific sampling, to be sure. But if my hunch is correct, a quick comparison of Beck’s radio ratings (which will probably include more fans and fewer critics), along with a few other demographics, might just show that a strong plurality of Beck viewers in that “coveted” age group for advertisers is, in fact, peopled by folks who wish Beck would disappear from the airwaves. In other words, it’s entirely possible that the only thing preventing a mass advertiser bailout and cancellation of TV’s nightly hate hour…is the attention paid to his antics by the people who detest him.

I’m usually skeptical of the “just don’t pay attention to him” approach to bullies. But I’d love to see Nate Silver or another numbers whiz test this hypothesis: that Beck’s media empire rests on Beck “haters.” Any takers?

Update: Angelo Carusone, from the @StopBeck effort mentioned above, got in touch with us to make some great points. It’s valid to ask how much attention Beck gets from liberal viewers, he says, but “even if the premise [of the post] is true, which it isn’t, it still wouldn’t support the piece’s conclusion. The remaining advertisers are wholly uninterested in the younger demographic.” As we’ve detailed here before, Beck’s remaining advertisers hawk gold coins and “survival seeds” to his older, more conservative viewers, so it’s fair to say that the financial backing he has now doesn’t rely on the 25-to-54 set.

But more importantly, Carusone said he wanted to distinguish the function his group performs from the rest of the blogospherical fray. It’s clearly a good thing that there’s a forum for people to spotlight the financial losses when advertisers do abandon Beck, as more than 300 have so far (Beck also has zero advertisers in the UK, News Corp’s other big market). Nobody else in the mainstream really seems interested in highlighting that, Carusone says. Which is a shame, because activism really has made a difference in the bottom line that underwrites the show.

Whatever padding Beck’s ratings get from liberal viewers (and helpful bean-counters at News Corp.), it may be worth the price for some of that accountability journalism. What do you think? Tell us in the comments.