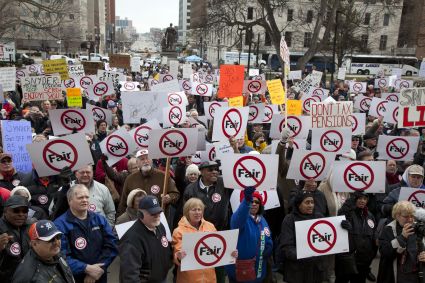 Last week, Michigan’s Republican Governor Rick Snyder signed into law a fiercely contested bill giving unelected “emergency financial managers” unprecedented power to shred union contracts, privatize city services, and consolidate or dissolve local governments, all in the name of saving struggling cities and school districts. Dubbed “financial martial law” by one approving state GOP lawmaker and “disaster capitalism” by critics, Snyder and his bill have become a target for Wisconsin-like protests. Several thousand demonstrators marched on the Michigan Capitol in the days before Snyder signed the bill. But gone unmentioned is a little-known Michigan think tank that for years has been pushing for the most controversial provisions in Snyder’s bill—and that’s bankrolled by some of the same right-wing millionaires and billionaires that backed Wisconsin Gov. Scott Walker and his anti-union legislation.

Since 2005, the Mackinac Center for Public Policy has urged reforms to Michigan law giving more power and protection to emergency financial managers, state-appointed officials who parachute into ailing cities or school districts and employ drastic measures to fix budgets on the brink of collapse. In January, the free-market-loving center published four recommendations, including granting emergency managers the power to override elected officials (such as a mayor or school board member) and toss out union contracts. All four ended up in Snyder’s legislation.

“The Mackinac Center has been tied at the hip with the Republican Party establishment for years,” says Doug Pratt, public affairs director at the Michigan Education Association. “It goes to their funding sources; it goes to their ideology.”

Mackinac is part of a network of state-based groups associated with the Heritage Foundation, the influential right-wing think tank in Washington. Its past and present board members include Robert Teeter, a GOP strategist and ’92 campaign manager for George H.W. Bush; Margaret Rieker, a former vice chairwoman of the Republican National Committee; and Joseph Lehman, a former vice president at the libertarian Cato Institute in Washington.

The Mackinac Center does not disclose its donors. But a review of tax records shows that the group’s funders include the charitable foundations of the nation’s largest corporations and a host of wealthy conservative and libertarian benefactors. Between 2002 and 2009, the Mackinac Center’s donors included the Charles G. Koch Foundation ($69,151), founded by the chairman and CEO of Koch Industries, who, with his brother, David, is a major backer of conservative causes; the Dick and Betsy DeVos Foundation ($80,000), the charity tied to the son of the co-founder of Amway, the multibillion-dollar direct marketing company; the Edgar and Elsa Prince Foundation, established by the parents of Blackwater founder Erik Prince, who serves as the foundation’s vice president ($195,000); and the Walton Family Foundation ($100,000), established by Wal-Mart founder Sam Walton and his wife, Helen.

Michael LaFaive, director of the Mackinac Center’s fiscal policy initiative, says the Center is never influenced by its donors: “We are happy to take checks from people who don’t agree with us, but they’re not the ones sending us money.”

The Mackinac Center’s is a fervent advocate of privatization—its scholars support outsourcing everything from public school districts to Amtrak to state prisons—and backs anti-union legislation for Michigan. In 2007, the center published “A Collective Bargaining Primer,” advocating against mandatory unionization and automatic dues deductions for public school teachers and other public employees. Collective bargaining for teachers, the Center claims, “has become a significant deterrent to educational quality.” In other words, if you outsource as much as you can and kneecap the unions, the quality of education—and presumably city services—increases.

That position is in line with the beliefs of its donors. In 2009, Amway and Wal-Mart were among the 3,100 businesses that signed a letter opposing the Employee Free Choice Act (EFCA), which would’ve made it easier for employees to unionize; that same year, Wal-Mart spent $7.4 million on lobbying, much of it to defeat EFCA. (The law failed.) The Koch brothers, meanwhile, fund an array of organizations opposed to unions, including the advocacy group Americans for Prosperity, the Cato Institute, and the Reason Foundation. With the Mackinaw Center, it seems, their investment is paying off.