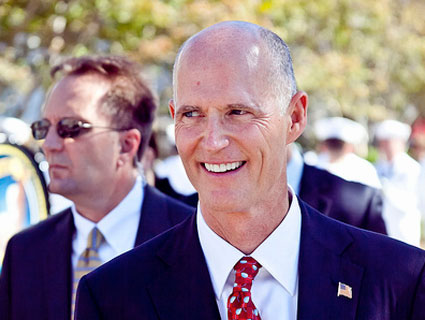 Republican governor Rick Scott’s push to privatize Medicaid in Florida is highly controversial—not least because the health care business Scott handed over to his wife when he took office could reap a major profit if the legislation becomes law.

Scott and Florida Republicans are currently trying to enact a sweeping Medicaid reform bill that would give HMOs and other private health care companies unprecedented control over the government health care program for the poor. Among the companies that stand to benefit from the bill is Solantic, a chain of urgent-care clinics aimed at providing emergency services to walk-in customers. The Florida governor founded Solantic in 2001, only a few years after he resigned as the CEO of hospital giant Columbia/HCA amid a massive Medicare fraud scandal. In January, according to the Palm Beach Post, he transferred his $62 million stake in Solantic to his wife, Ann Scott, a homemaker involved in various charitable organizations.

Florida Democrats and independent legal experts say this handover hardly absolves Scott of a major conflict of interest. As part of a federally approved pilot program that began in 2005, certain Medicaid patients in Florida were allowed to start using their Medicaid dollars at private clinics like Solantic. The Medicaid bill that Scott is now pushing would expand the pilot privatization program to the entire state of Florida, offering Solantic a huge new business opportunity.

“This is a conflict of interest that raises a serious ethical issue,” says Marc Rodwin, a medical ethics professor at Suffolk University Law School in Boston. “The public should be thinking and worrying about this.”

With Scott’s blessing, the Florida statehouse is currently hammering out the final details of the Medicaid bill, with a vote expected in the upcoming weeks. In the meantime, Scott has moved forward on another front that could also bring new business to Solantic. On Tuesday, he signed an executive order requiring random drug testing of many state employees and applicants for state jobs. He’s also urged state legislators to pass a similar bill that would require drug testing of poor Floridians applying for welfare.

Among the services that Solantic offers: drug testing.

“These changes to Medicaid are basically nothing but a business plan for Rick Scott’s Solantic,” says Florida Democratic Party spokesman Eric Jotkoff.

Scott’s office dismiss ethics questions over the governor’s Solantic ties without further elaboration. “The claims of a conflict of interest are incorrect and baseless,” Brian Hughes, Scott’s deputy communications director, responds in an email. When pressed by local reporters, Scott also glosses over the issue. “I believe in the principle that if you have more competition it will drive down the prices,” Scott told the St. Petersburg Times last week when asked about his wife’s shares in Solantic. “If you give more choices, it’s better for the consumer also to help drive down price…and that’s exactly what I’m going to do as governor.”

Florida Democrats have blasted the governor over the controversy. “These changes to Medicaid are basically nothing but a business plan for Rick Scott’s Solantic,” says Eric Jotkoff, a spokesman for the Florida Democratic Party. “It’s clear that he stands to greatly profit from these changes to Medicaid.” The Democrats also point to Scott’s past: Columbia/HCA was ultimately forced to pay the biggest Medicare fraud settlement in history, totaling $1.7 billion, though Scott denied knowledge of the fraud and escaped being personally penalized. More recently, Florida’s Medicaid system has also been beset by fraud perpetrated by private health care officials. In January, five former executives of Wellcare, a managed care company, were indicted by a grand jury for running a scheme that stole Medicaid money designated for patients.

Scott’s current proposal aims to save the state $1 billion by drastically overhauling Medicaid, allowing private managed care companies to bid for contracts rather than paying traditional fee-for-services. The majority of Medicaid patients receive care through private companies and HMOs, but under Florida’s bill such firms would end up having vast new authority over the program, with great leeway to limit access to services or reduce benefits. The bill would also put a hard cap on the amount of money that these managed care companies could spend on Medicaid, which advocates say could particularly harm disabled and elderly patients who require costlier long-term care.

In the past, Florida’s Medicaid pilot programs—which tested the waters for the proposals at the heart of the current bill—have been plagued by problems. According to a 2008 study by the Georgetown Center for Children and Families, participants experienced huge delays and restricted access to necessary treatments, says the center’s co-executive director, Joan Alker. Patients found the new system bureaucratic and confusing—and HMOs were prone to dropping out without warning. Dr. Aaron Elkin, president of the Broward County Medical Association, recently declared the program to be a failure. And Medicaid patients don’t have much better reviews. “It has taken four months to get a biopsy on a throat cancer due to the impediments placed by the HMOs for authorizations,” one participant in the program told NPR.

Scott and Florida Republicans are nevertheless plowing ahead, arguing that slashing costs is necessary due to the state’s $3.6 billion budget deficit. Yet even if the bill passes the Florida statehouse, it will likely face another roadblock with the Obama administration, which must approve the biggest changes in the measure. Though the Bush administration happily green-lighted the pilot program in 2005, Obama officials are less likely to be amenable to continuing the troubled program—much less expanding it. The Obama administration, however, is holding off from commenting on the Florida bill until it receives the final version, though officials are “aware of some of the concerns” raised about the pilot programs, says Mary Kahn, a spokesperson for the Center for Medicare and Medicaid Services.

Casting himself as a free-market champion, Scott put his opposition to “Obamacare” at the heart of his campaign. But he could ultimately stand to gain from one of the federal government’s biggest entitlements—a program that’s also set to expand massively under the Affordable Care Act. Concludes Georgetown’s Alker: “It’s especially ironic when people who speak out against government involvement in health care turn around and profit from it.”