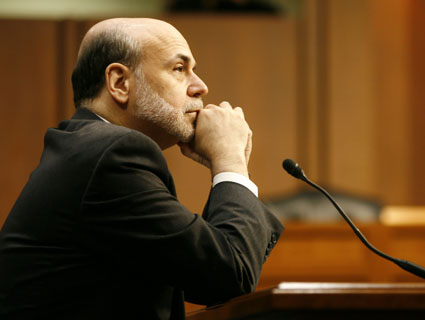 On Wednesday, Ben Bernanke will do what no other Fed chairman before him has ever done: Hold a press conference.

That’s big news for the quasi-governmental body known as the “Temple of Secrets,” which controls the flow of money in the economy and often acts as a lender of last resort for crumbling banks. On Wednesday afternoon, the Fed will host reporters after a two-day meeting of its Federal Open Markets Committee, the Fed’s main body shaping monetary policy in the US. With public distrust of the Fed soaring, the much-anticipated event gives Bernanke a chance to openly discuss the Fed’s deliberations and try to build trust in the 98-year-old institution. Bernanke will speak directly to the media at the Fed’s headquarters in Washington, DC, then take 45 minutes of questions. The interrogation will undoubtedly range from the Fed’s monetary policy, to its role in spurring the US economic recovery, to the country’s long-term fiscal health.

Here are six questions we’d like to see Bernanke answer. (Any questions you’d like see posed to the Fed chief? Share them in the comments section. Or tweet them @motherjones using the hashtag #FedSpeaks.)

1) What more can the Fed do to put Americans back to work? And what, in your opinion, is a tolerable level of unemployment in the US?

Faced with a sluggish recovery and meager job growth, Bernanke and the Fed have in recent years spent trillions of dollars buying up huge numbers of Treasury and mortgage bonds in an attempt to inject some life into the economy. (In wonk-speak, this bond-buying program is called “quantitative easing.”) By some measures, Bernanke’s program succeeded: The stock market rallied, American exports got cheaper, and borrowing costs for big companies decreased.

But unemployment—which the Fed’s program was supposed to address—remains stubbornly high, at 8.8 percent, with 13.5 million Americans out of work. Sure, the American economy has added jobs for the past three months and the headline jobless rate has decreased. But a dropping unemployment rate is as much due to jobless workers giving up the search and dropping out of the workforce as a brightening jobs picture. One of the Fed’s mandates is to “foster maximum employment”; so far, however, the Fed’s efforts to fulfill that mission have been sorely lacking.

2) What steps would you take to address the country’s long-term fiscal health?

In 2009, Bernanke testified in his re-appointment hearings before the Senate banking committee that Congress should go after entitlement programs such as Medicare and Social Security as a way to fix the nation’s long-term deficit problem. “Willie Sutton robbed banks because that’s where the money is, as he put it,” Bernanke said. “The money in this case is in entitlements.”

That’s as close as Bernanke has come to endorsing solutions for the country’s debt problem. He’s also mentioned higher taxes and “less spending on everything else from education to defense.” In the meantime, a handful of commissions made up of current and former lawmakers and other experts have laid out comprehensive roadmaps for avoiding financial calamity in the relatively near future, calling for an array of solutions—far less defense spending, tax increases, a higher retirement age, eliminating tax breaks, and, yes, slashing entitlement spending.

But given the chance to lay out his own plan, what would Bernanke, the nation’s foremost economist, do?

3) Would you consider a higher inflation target? Why or why not?

Top economists on the left (such as Princeton’s Paul Krugman) and the right (like Harvard’s Greg Mankiw) have called at various times for the Federal Reserve to increase its target inflation rate. The Fed currently aims for an informal inflation target of around 2 percent per year, but some economists believe that a higher rate of inflation could push companies and individuals that are hording cash to invest that money by hiring people and increasing spending. (If your money is worth less every year, you have more of an incentive to spend and invest it. If you can sit on it without it losing a lot of value, you have more of an incentive to save.)

4) Why has the Fed fought transparency efforts?

Last year, the Huffington Post‘s Ryan Grim reported that the Fed itself was lobbying against bipartisan efforts to empower the Government Accountability Office to audit the central bank. Bernanke will probably get this question, and he’s likely to argue that a full audit would have infringed on the Fed’s independence on monetary policy (interest rates and the like). In reality, many audit supporters were far more interested in finding out more information about the Fed’s loan guarantees to banks (foreign and domestic) during the height of the financial crisis, and the scope and nature of the bond-buying programs that have followed. A follow-up question should point this out, and note that the Fed also warned of disaster if it lost a lawsuit brought by Bloomberg news to force disclosure of the banks it lent to and the collateral those banks posted. The Fed did lose the suit, and the world didn’t end.

5) Republicans are holding up the confirmation of Obama’s Fed Board of Governors nominee Peter Diamond, a Nobel Prize winner, over concerns that he’s underqualified. Do you agree?

This one’s pretty straightforward, and could be one of the reasons Bernanke is holding this press conference. Diamond is, like Bernanke, an inflation “dove”—he’s not as worried about it as some of the other members of the Fed’s Board of Governors. With Diamond on the board, Bernanke will have another ally on his side.

6) The Fed is supposed to be independent, yet banks appoint many of its directors. Is the Fed too close to Wall Street?

Each Federal Reserve bank (there are 12) has nine directors. Six of those are appointed by the banks in the local district—enough to elect whomever they want to the Fed’s Open Market Committee, which sets monetary policy. That means banks can exercise huge leverage over interest rates—and unlike the American people in general, banks’ interests are often served by keeping inflation low, even at the expense of widespread unemployment. The directors of the 12 Federal Reserve banks only get five votes on the Open Market Committee, but that’s a big enough bloc to seriously affect policy. It would be interesting to see if Bernanke supports reform of this system.