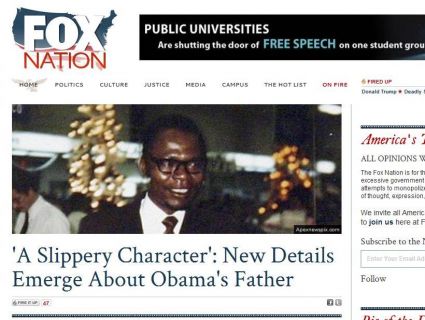 Now that denial isn’t much of an option, the anger stage has kicked in: Birtherism has given way to fear-of-a-virile-black-man-ism. If you navigated last night to the front page of Fox Nation, a Fox News-run website, you’d have found this lead story, splashed with a grainy photo of Barack Obama Sr.: “‘A Slippery Character’: New Details Emerge About Obama’s Father.“

The story, based on documentary evidence obtained by an Arizona nonprofit news site, is lifted from the UK’s Daily Mail tabloid (more on that below). It’s a roughly 1,100-word hatchet job, offering few actual new details, to confirm what President Obama had already stated in his memoir: His dad wasn’t the greatest of guys. But it’s all in how the article conveys that message:

With a father like this, it is little wonder President Obama did not want to release his full birth certificate.

Though the proof that he was actually born in Hawaii may silence some critics, a new, rather more interesting side of his life has emerged—that his father Barack Obama senior was a serial womaniser and polygamist who government and university officials were trying to force out of the country.

Obama senior married Stanley Ann Dunham, a white student from Kansas, not only when he was said to have already been married to a woman in Kenya, but at a time when interracial marriages were still illegal in many parts of the U.S.

Documents obtained from the U.S. immigration service paint a picture of a man who ‘had an eye for the ladies’ and, according to his file, had to be warned several times to stay away from girls at the university.

This certainly has it all: polygamy, the suggestion of illicit interracial sex, and the predatory sexual appetites of a dark-skinned African man. In fact, this theme’s got a name, or a couple of names, in popular Western culture: “Black beast“, “black buck“, “Mandingo“. It’s the theory that black males are more animal than human, with an insatiable predilection for defiling white (read: virtuous) women.

“There is little doubt that our white countrymen have been in a chronic state of paranoid fear over black male sexual power,” Harvard psychiatrist Alvin Poussaint wrote of the stereotype in Ebony…in 1972. “‘N***er’ jokes and pornographic literature abound with stories testifying to the black male’s sexual appetites and attributes. The preoccupation is evident in much white folklore.”

“Folklore” is probably a good way to describe the birther movement, which surmised that America’s first multiracial president couldn’t possibly be a real American. But now that Obama’s longform birth certificate quashes any lingering doubt that he is American-born, the folklore evolves to accommodate it: Heaven forfend if it should be the case that we, the people, elected the offspring of an unholy union between a bestial sexual predator and an innocent Kansas girl…a union that’s proven by the existence of the birth certificate!

So who’s responsible for this race-baiting wolf rolling in the sheepscloak of investigative reporting? Hard to say, since the original story is unbylined. It comes from a right-wing British tabloid, the Daily Mail, whose previous claim to fame was extolling fascism in the 1930’s under headlines like “Hurrah for the Blackshirts!” But Fox Nation—which claims it’s “for those opposed to intolerance”—saw fit to republish it with nary a challenge…not even to this final, peculiarly agnostic comment on the birther controversy:

Mr Obama has been dogged by persistent questions about his citizenship since the election more than two years ago. More than 60 per cent of Americans have told pollsters they are not convinced he was born in the U.S.

If true, this would make the politician constitutionally ineligible to occupy the White House.

It’s unclear what polls the Daily Mail was looking at. Nor is it clear why, after Longformgate, it evaluates the birthers’ claim as possibly “true.” But it suggests a novel reason why the birther controversy has lasted so long:

Many senior Republicans have tried to distance themselves from the birther movement and some suspect it has been encouraged by the White House in order to discredit the opposition party.

Yes, that Barack Jr.: Sneaky and underhanded, just like his old man.