The House Committee on Science and Technology spent three hours on Thursday debating climate science in the first hearing on the subject since Texas Republican Ralph Hall, a climate skeptic, took the helm of that panel. His first statement about the mission of the panel under his control talked about how they have to deal with “the global warming or global freezing,” which gave a good sense of where things were heading this year.

It’s worth noting that the majority of the witnesses they called on yesterday weren’t actually climate scientists. The Republicans’ witness list included a lawyer, an economist, and marketing professor. There was one actual climate scientist called by the Republicans, John Christy of the University of Alabama, though his beliefs on climate change are notably outside of the mainstream of climate science in that he contests the idea that greenhouse gases are the primary driver of warming. The panel also included Lawrence Berkeley National Laboratory’s Richard Muller, a physicist who is currently leading the Berkeley Earth Surface Temperature study, an attempt to reexamine global temperature records (more on that in a minute). MIT’s Kerry Emanuel was the witness called by Democrats on the committee and charged with defending the mainstream climate science views.

For more on the meat of the hearing, see the great live-blog that Science ran that featured scientists and reporter Eli Kintisch, or the real-time commentary that the Project on Climate Science organized, also with actual climate scientists. There was a lot of repetition of the same old denier talking points from representatives in the hearing, backed up by the panelists that were largely selected to reinforce those views. At one point, J. Scott Armstrong, the University of Pennsylvania marketing professor, actually responded to a question on the science, “I actually try not to learn a lot about climate change.”

The most interesting thing to me, though, is that when asked directly, not one of the actual scientists disputed the fact that the planet is warming and that greenhouse gases are a notable factor. Even Christy said in the hearing that yes, greenhouse gas emissions “do exert a warming influence on the planet.” And then there was Muller, who has raised questions about climate data and whose project at Berkeley has drawn criticism for, among other things, its funding from the Charles G. Koch Charitable Foundation. The evaluation of global temperature records that his group is undertaking is still forthcoming, but in his testimony he made it clear that, despite what the critics of climate science have argued, their own evaluation has so far affirmed those from NASA, the Climatic Research Unit in the UK, and the National Oceanic and Atmospheric Administration. “We see a global warming trend that is very similar to that previously reported by the other groups,” he stated in his written testimony. Over at Dot Earth, Andy Revkin has more on how his testimony must have been a let-down for those hoping to debunk the premise that the planet is warming. Here’s the graphic Muller showed, which indicates that BEST’s study, in black, is basically the same as the ones that skeptics have been attacking for years: 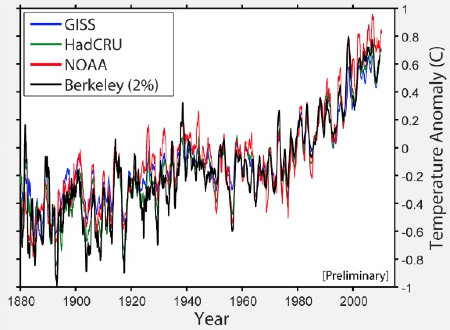 While he was vastly outnumbered in the hearing, Emanuel did a solid job of communicating the central tenents of climate science, why it’s a cause for concern, and why the disinformers are wrong. Here’s a segment from his testimony that was particularly adept:

In soliciting advice, we should be highly skeptical of any expert who claims to be certain of the outcome. I include especially those scientists who express great confidence that the outcome will be benign; the evidence before us simply does not warrant such confidence. Likewise, beware those who deride predictive science in its entirety, for they are also making a prediction: that we have nothing to worry about.

Chris Mooney has more on his testimony over at Discover, where he also reminds us that Emanuel is a Republican—which you would think might make the House majority pay at least a little bit of attention.