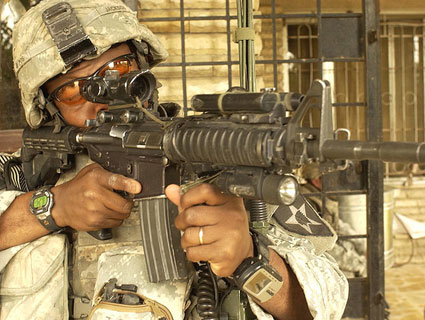 It is a commonplace of American politics: when the moving van pulls up to the White House on Inauguration Day, it delivers not only a closetful of gray suits and power ties, but a boatload of expectations.

A president, being the most powerful man in the world, begins history anew—so at least Americans believe, or pretend to believe. Out with the old, sordid, and disappointing; in with the fresh, unsullied, and hopeful. Why, with the stroke of a pen, a new president can order the closing of an embarrassing and controversial off-shore prison for accused terrorists held for years on end without trial! Just like that: done.

For all sorts of reasons, the expectations raised by Barack Obama’s arrival in the Oval Office were especially high. Americans weren’t the only ones affected. How else to explain the Nobel Committee’s decision to honor the new president by transforming its Peace Prize into a Prize Anticipating Peace—more or less the equivalent of designating the winner of the Heisman Trophy during week one of the college football season.

Of course, if the political mood immediately prior to and following a presidential inauguration emphasizes promise and discovery (the First Lady has biceps!), it doesn’t take long for the novelty to start wearing off. Then the narrative arc takes a nosedive: he’s breaking his promises, he’s letting us down, he’s not so different after all.

The words of H.L. Mencken apply. “When I hear a man applauded by the mob,” the Sage of Baltimore wrote, “I always feel a pang of pity for him. All he has to do to be hissed is to live long enough.” Barack Obama has now lived long enough to attract his fair share of hisses, boos, and catcalls.

Along with prolonging and expanding one war in Afghanistan, the Nobel Peace laureate has played a leading role in starting another war in Libya. Laboring to distinguish between this administration and its predecessor, Obama’s defenders emphasize the purity of his motives. Contemptuous of George W. Bush’s claim that U.S. forces invaded oil-rich Iraq to keep weapons of mass destruction out of the hands of terrorists, they readily accept this president’s insistence that the United States intervened in oil-rich Libya to prevent genocidal slaughter. Besides, testifying to our virtuous intent, this time we’ve got the French with us rather than against us.

Explaining Why Is a Mug’s Game

In truth, to ascribe a single governing purpose or rationale to any large-scale foreign policy initiative is to engage in willful distortion. In any administration, action grows out of consensus. The existence of consensus among any president’s advisers—LBJ’s inner circle supporting escalation in South Vietnam back in 1965, George W.’s pressing for regime change in Baghdad—does not imply across-the-board agreement as to intent.

Motive is slippery. As Paul Wolfowitz famously noted regarding Iraq, weapons of mass destruction merely provided the agreed upon public rationale for war. In reality, a mix of motives probably shaped the decision to invade. For some administration officials, there was the prospect of eliminating a perceived source of mischief while providing an object lesson to other would-be troublemakers. For others, there was the promise of reasserting U.S. hegemony over the world’s energy heartland. For others still (including Wolfowitz himself), there were alluring visions of a region transformed, democratized, and pacified, the very sources of Islamist terror thereby eliminated once and for all.

At least on the margins, expanding the powers of the presidency at the expense of Congress, bolstering the security of Israel, and finishing what daddy had left undone also likely figured in the equation. Within this mix, policymakers could pick and choose.

In the face of changing circumstances, they even claimed the prerogative of revising their choices. Who can doubt that President Bush, faced with the Big Oops—the weapons of mass destruction that turned out not to exist—genuinely persuaded himself that America’s true and abiding purpose for invading Iraq had been to liberate the Iraqi people from brutal oppression? After all, right from day one wasn’t the campaign called Operation Iraqi Freedom?

So even as journalists and historians preoccupy themselves with trying to explain why something happened, they are playing a mug’s game. However creative or well-sourced, their answers are necessarily speculative, partial, and ambiguous. It can’t be otherwise.

Rather than why, what deserves far more attention than it generally receives is the question of how. Here is where we find Barack Obama and George W. Bush (not to mention Bill Clinton, George H. W. Bush, Ronald Reagan, and Jimmy Carter) joined at the hip. When it comes to the Islamic world, for more than three decades now Washington’s answer to how has been remarkably consistent: through the determined application of hard power wielded by the United States. Simply put, Washington’s how implies a concerted emphasis on girding for and engaging in war.

Presidents may not agree on exactly what we are trying to achieve in the Greater Middle East (Obama wouldn’t be caught dead reciting lines from Bush’s Freedom Agenda, for example), but for the past several decades, they have agreed on means: whatever it is we want done, military might holds the key to doing it. So today, we have the extraordinary spectacle of Obama embracing and expanding Bush’s Global War on Terror even after having permanently banished that phrase to the Guantanamo of politically incorrect speech.

Efforts to divine this administration’s intent in Libya have centered on the purported influence of the Three Harpies: Secretary of State Hillary Clinton, U.N. Ambassador Susan Rice, and National Security Council Human Rights Director Samantha Power, women in positions of influence ostensibly burdened with regret that the United States failed back in 1994 to respond effectively to the Rwandan genocide and determined this time to get it right. Yet this is insider stuff, which necessarily remains subject to considerable speculation. What we can say for sure is this: by seeing the Greater Middle East as a region of loose nails badly in need of being hammered, the current commander-in-chief has claimed his place in the ranks of a long list of his warrior-predecessors.

The key point is this: like those who preceded them, neither Obama nor his Harpies (nor anyone else in a position of influence) could evidently be bothered to assess whether the hammer actually works as advertised—notwithstanding abundant evidence showing that it doesn’t.

The sequence of military adventures set in motion when Jimmy Carter promulgated his Carter Doctrine back in 1980 makes for an interesting story but not a very pretty one. Ronald Reagan’s effort to bring peace to Lebanon ended in 1983 in a bloody catastrophe. The nominal victory of Operation Desert Storm in 1991, which pushed Saddam Hussein’s forces out of Kuwait, produced little except woeful complications, which Bill Clinton’s penchant for flinging bombs and missiles about during the 1990s did little to resolve or conceal. The blowback stemming from our first Afghanistan intervention against the Soviets helped create the conditions leading to 9/11 and another Afghanistan War, now approaching its tenth anniversary with no clear end in sight. As for George W. Bush’s second go at Iraq, the less said the better. Now, there is Libya.

The question demands to be asked: Are we winning yet? And if not, why persist in an effort for which great pain is repaid with such little gain?

Perhaps Barack Obama found his political soul mate in Samantha Power, making her determination to alleviate evil around the world his own. Or perhaps he is just another calculating politician who speaks the language of ideals while pursuing less exalted purposes. In either case, the immediate relevance of the question is limited. The how rather than the why is determinant.

Whatever his motives, by conforming to a pre-existing American penchant for using force in the Greater Middle East, this president has chosen the wrong tool. In doing so, he condemns himself and the country to persisting in the folly of his predecessors. The failure is one of imagination, but also of courage. He promised, and we deserve something better.

Andrew J. Bacevich is professor of history and international relations. His most recent book Washington Rules: America’s Path to Permanent War (Metropolitan Books) is just out in paperback. To catch Timothy MacBain’s latest TomCast audio interview in which Bacevich discusses what to make of the Obama administration’s Libyan intervention, click here, or download it to your iPod here.