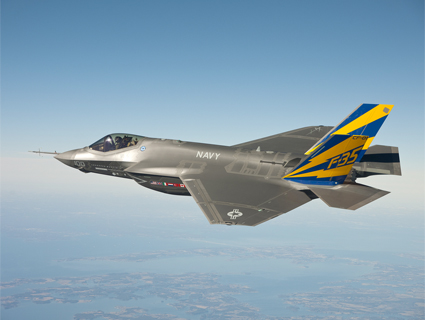 Even by the freewheeling standards of military contracting, the F-136 jet engine was a boondoggle in the making: a piece of hardware that the Pentagon didn’t need and didn’t really want, built by a megacorporation that pays no income tax, with a pricetag in the billions. And now it’s officially history: After years of attempts to kill off General Electric’s controversial “second engine” program for the F-35 Joint Strike Fighter, the military finally succeeded yesterday, potentially saving another $2.9 billion and pleasing deficit hawks, who’d long wanted to see the project gone.

The Department of Defense appears to have to scored a rare victory for fiscal sanity by taking out the F-136. “It took 2 SecDefs, 2 Admins & 5+ years, but Extra Engine contract finally terminated, saving taxpayers $1M per day,” tweeted DOD spokesman Geoff Morrell. But if the Pentagon won a battle for Joe Taxpayer, the episode suggests it’s losing the war against wasteful spending. After all, how did it even get to the point where $3 billion was spent (PDF) on a contract of questionable utility that virtually everyone claimed to hate? And what’s it say about our ability to control costs on more popular defense projects?

The Joint Strike Fighter may be an especially easy source of cost overruns. Also known as the F-35 Lightning II, the aircraft is expected to eventually become the workhorse of the military’s jet-flying services—the Air Force, Navy, and Marines—for the next 50 years or more. (It was planned to join fighter squadrons this year, but testing delays have forced the services to rely on their current geriatric arsenals.) Since the JSF is such a massive program, intended to replace 95 percent of America’s fighter stock, any contractor who’s in on the action will benefit richly. Any contractor left out in the cold could see its share of defense dollars dwindle.

The dueling jet engine makers created rival websites where they sniped at each other in entertainingly bureaucratic fashion.

Such was the case with GE. Last year, it tumbled from being the nation’s 24th biggest defense contractor to being the 33rd, pulling in $844 million in defense dollars. In 2001, it lost the $4 billion competition to provide engines for the JSF; that contract went to Pratt & Whitney, a division of United Technologies (the 21st largest defense contractor, with $1.47 billion in annual military contracts).

But all was not lost. GE joined forces with another beleaguered contractor, Rolls Royce, and successfully lobbied Congress to hand them a long-term contract to research and produce “alternative” engines for the JSF aircraft. House Speaker John Boehner (R-Ohio) was a big booster of the extra-engine deal, perhaps because GE’s Cincinnati construction plant was in his district’s back yard.

Resistance to the “extra engine” program came from diverse corners, including deficit-decrying tea partiers, dovish progressives, and Defense Secretary Robert Gates. “My idea of competition is winner takes all,” and GE’s plan was a loser, he told the Senate appropriations committee last summer. At the height of the debate, the dueling engine makers created rival websites, GE’s f136.com and Pratt & Whitney’s f135engine.com, where they sniped at each other in entertainingly bureaucratic fashion. “Eliminating the extra engine once and for all would be a great way for Washington to start winning the budgetary war and the voters’ respect,” P&W’s blogger boasted. GE responded that P&W’s case “has been debunked by fact-based information.”

Led by its deficit hawks, Congress sided with P&W last month, killing funding for the F-136 extra engine program and prompting the DOD’s Monday move. (“233 members of the House of Representatives, including many freshmen, demonstrated ideologically rock-solid fiscal fortitude by voting to kill future funding for the $3 billion extra engine, despite the unwanted attention of the General Electric/Rolls Royce lobbying machine,” the P&W blog gloated. It failed to point out that Rolls Royce was a member of the victorious F-135 team, too.)

But the F-136 is just a drop in the bucket. On April 15, the Pentagon told Congress that it expected the JSF program to cost taxpayers $1 trillion, plus another $382 billion for development and production, assuming a 30-year lifespan for the first batch of aircraft. “Most of the cost of our programs is in ‘having’ them, not in ‘acquiring’ them,” the DOD’s top arms buyer, Ashton Carter, told a crowd at the Heritage Foundation last week. In other words, while Congress debates defunding NPR and Planned Parenthood, it’s putting taxpayers on the hook for hundreds of millions to maintain and repair a planned fleet of 2,443 Joint Strike Fighters. (In comparison, China reportedly has 1,300 fighter aircraft; Russia has 748.) “We are taking the challenge” posed by the $1 trillion estimate and “saying we’ve got to drive this [anticipated cost] down fast,” an Air Force beancounter told Bloomberg.

And while GE will lament the loss of the F-136 program, the company is hardly on the outs with the Pentagon. In January, the Navy gave it $576 million to keep the engines running on the sea service’s existing fighter aircraft. And on a single day last March, not long before GE’s creative tax accounting came to light, the firm got half a billion dollars from the Defense Logistics Agency to provide replacement motors for existing planes, as well as another $247 million from the Navy for 68 additional fighter jet engines. Every day, the Pentagon publishes a list of all the contracts worth more than $5 million that it’s awarded that day. And nearly every day, GE makes the list.