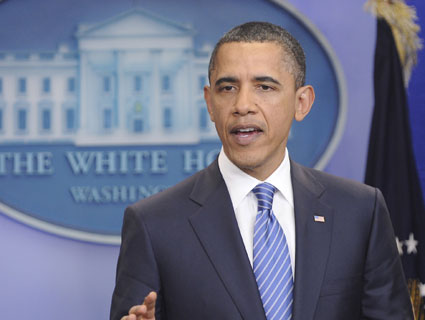 The Republicans declare, Slash the government now to save the economy. President Barack Obama’s response: Yes, we must cut, but we must cut in precisely the right fashion to preserve the crucial investments that drive economic growth in the long run and strengthens the health and economic security of the nation’s seniors and most vulnerable. Who wins this debate—which is, at the moment, transpiring on the anti-government home field of Republicans?

With an afternoon speech in Washington on Wednesday, the president tried to swipe the mantle of Cutter-in-Chief from the GOP’s clutches—at least, the title of Adult Cutter-in-Chief—and to steer the larger political discourse in a different direction. His aim is to position himself as the fellow who understands the public freak-out (such as it is) over government spending and to persuade Americans—read: independent voters—that he can be trusted more than the GOPers to do this tough job responsibly. The message: do you want Obama the careful surgeon with a sterile scalpel or the Republican amputators with rusty meat-cleavers? Moreover, he’s asking, do you buy the GOP’s vision of a broke-down America that has to squeeze the poor and the elderly and neglect necessary investments in education, R&D, and infrastructure, while granting generous tax breaks to the rich, in order to move ahead toward better days?

Obama is embracing deficit-reduction as a top priority because he and his top political advisers believe that he has lost independent voters and that to get them back—and earn their support for his win-the-future agenda of job-creating investments and for his 2012 reelection—he has to reestablish credibility with the indies. That means accepting the current terms of the national political debate (the issue is spending, not jobs) in order to reshape that debate. Polls repeatedly show that most voters are not eager to squeeze entitlement programs, such as Medicare, Medicaid, and Social Security and that job-creation remains a priority. Yet Obama and his crew calculate that he cannot afford to be cast as the oblivious defender of government spending and that his political currency still depends on making Washington function rather than on dramatically confronting GOP ideologues—no matter how extreme they are. So he has to work with the slash-government partisans of the other side. (At Tuesday’s White House daily press briefing, press secretary Jay Carney noted that Obama considers GOP Rep. Paul Ryan’s proposed budget—which would end Medicaid and Medicare as they currently exist and burden the poor and elderly with more health care costs, while cutting taxes for the wealthy—”imbalanced.” That was as far as Carney would go in criticizing the draconian plan. Yet when I asked Carney if Obama believes it is “fundamentally unfair,” after a brief pause, he said, “Yes.” Carney did not elaborate.)

With plenty of political and policy calculations in mind, Obama felt compelled to release his own deficit-reduction plan—a proposal that would shave $4 trillion over the next 12 years—even if it appears (accurately) that he has been maneuvered into reacting to Ryan and accepting, to a degree, the basic operating premise of the Republicans. His proposal—full of promised future cuts in non-security discretionary spending ($770 billion over 10 years), Pentagon spending ($400 billion), and mandatory programs like agricultural subsidies ($360 billion), and savings in Medicare and Medicaid ($480 billion)—attempts to trump the GOP plan in seriousness with a guarantee: a debt failsafe. If by 2014, budget projections do not show that the debt-to-GDP ratio has stabilized and is declining, there will be automatic across-the-board spending cuts to ensure that deficits average less than 2.8 percent of gross domestic product. How adult, though, is such a stop-me-before-I-spend-again mechanism that doesn’t allow for adult discretion? Social Security, Medicare, and low-income programs would be exempt from this anti-spending Doomsday Machine—as will any spending necessary to deal with an economic downturn or a national security emergency. No doubt, GOPers will point to the exemptions as a sign that Obama is not sufficiently serious about deficits and the debt.

But in his speech—entitled “The Country We Believe In”—Obama endeavored to widen the debate beyond spending cuts and transform it into a fight over values and vision. The tussle over numbers, he noted, is part of a “larger debate we’re having about the size and role of government [which] has been with us since our founding days.” He contended that Republicans, by supporting a proposal that will impose burdens on the poor and the elderly to underwrite a tax break for the rich, have a skewed view of the American dream: “This is a vision that says up to 50 million Americans have to lose their health insurance in order for us to reduce the deficit.” And it’s a not only a selfish vision, but a pessimistic one:

These are the kind of cuts that tell us we can’t afford the America we believe in. And they paint a vision of our future that’s deeply pessimistic. It’s a vision that says if our roads crumble and our bridges collapse, we can’t afford to fix them. If there are bright young Americans who have the drive and the will but not the money to go to college, we can’t afford to send them.

Obama, going further than Carney would the day before, blasted the Ryan plan for including a trillion dollars or so in tax cuts for the wealthy:

Think about it. In the last decade, the average income of the bottom 90% of all working Americans actually declined. The top 1% saw their income rise by an average of more than a quarter of a million dollars each. And that’s who needs to pay less taxes?

He vowed that such cuts won’t “happen as long as I’m President.” He said he would refuse to renew the Bush tax cuts for millionaires and billionaires. In fact, he called for increasing taxes on the wealthy, as part of a “balanced” deficit-reduction plan. This was liberal tonic in a conservative bottle.

Obama also took a step the chattering class won’t fancy: he didn’t say the sky is falling regarding Social Security. He reiterated his established position: Social Security is not in crisis or the cause of near-term deficit problems. So he proposed no specific action—but offered principles (no privatization, no reduction in benefits for current beneficiaries, no slashing in benefits for future beneficiaries). He has called for bipartisan negotiations to shore up Social Security separate from bipartisan negotiations he has urged for dealing with the deficit.

So Obama is ticking off the boxes—cuts in government (including the military), taxes on the wealthy, and Medicare and Medicaid savings (details to come)—as he tries to leapfrog over the GOP in this deficit-reduction chase and rewrite the overarching narrative. This is not about the numbers, he’s insisting, it’s about the values and aspirations of this nation. But he’s attempting this sophisticated and tricky maneuver on GOP turf—and in doing so, he runs the risk of reinforcing the Republicans’ basic message that the name of the game is deficit-reduction. The speech showed that Obama realizes that to win the debate, he must change the debate.