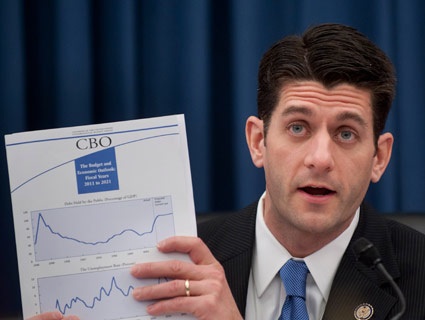 For Democrats, it seems like a gift from above. On the very day that President Obama officially launches his reelection bid, House budget guru Paul Ryan (R-Wis.) announces a plan to privatize Medicare. This latest GOP cost-cutting scheme amounts to a medical voucher system: Rather than paying for care directly, the government would help elderly Americans purchase private insurance. “It’s going to end Medicare as we know it,” says Nadeam Elshami, communications director for House Minority Leader Nancy Pelosi (D-Calif.), repeating the new Democratic talking point.

It’s also a politically risky move, effectively gutting one of the nation’s most popular entitlements—one that Lyndon Johnson fought long and hard to enact back in 1965. To date, experiments in privatizing Medicare have fared poorly—take Medicare Advantage, by which private insurers now serve about a quarter of Medicare recipients: Due to waste and inefficiency, the program has ended up costing 14 percent more than Medicare itself would have spent. Ryan’s proposal would allow Democrats to claim that the GOP is declaring open season on seniors. “This should be one they should hit out of the park,” says Dean Baker, co-director of the left-leaning Center for Economic Policy Research.

But the GOP could be pitching a spitball here. Democrats did a poor job of defending their reforms the first time around (see 2010 elections), but simply attacking Ryan’s plan without trying to defend—perhaps even strengthen—their own tough-love efforts to save Medicare might also put them at risk. “You can’t just criticize the other guy, you’ve got to offer something,” Rep. Jim McDermott (D-Wash.) told Mother Jones. “And I think we have something. Members shouldn’t be the least bit ashamed to explain what we’ve produced.”

The left began sounding the alarm as Ryan previewed his plan on Sunday’s talk shows. The House GOP has “an ambitious new plan to effectively destroy the entire Medicare system,” declared The Washington Monthly‘s Steve Benen. “Privatizing and voucherizing Medicare does nothing whatsoever to control costs…[savings] will come from denying medical care to those who can’t afford to top up their premiums,” echoed Paul Krugman. “It’s insane,” says Michael Bocian, a principal at the Democratic polling and consulting firm Greenberg Quinlan Rosner. “I think they’ll hang themselves on this.” Given polls in which three-fourths of Americans say cutting Medicare for seniors was a bad idea, “it’s hard to see why this would be a smart electoral strategy” for Republicans, he adds.

Democratic observers say they’re confident that the GOP will pay the price come election time. “Saying Republicans want to take a meat cleaver to Medicare will resonate. The GOP sort of shot themselves in the foot,” says Peter Harbage, a health care consultant and former Clinton administration official.

The best argument the GOP has going is that Medicare costs are spiraling out of control, putting America on a path toward fiscal doomsday. Of course, the Democrats have already taken unprecedented steps to rein in the cost of Medicare, and the overall health care system, through the Affordable Care Act (a.k.a. “Obamacare”). It’s thanks largely to Republican fear-mongering that these cost-cutting provisions are among the least popular and most widely misunderstood elements of federal health reform. Given the Dems’ track record in explaining their reforms to the public, the Democratic rank and file may be reluctant to give it another go.

One of the law’s boldest reforms is the creation of an independent panel governs how much Medicare should pay for various drugs and procedures. Its defenders both on and off the Hill say such a panel is absolutely central to controlling costs and restoring fiscal sanity throughout the health care system. “Right now, we have a system where no one really says no, so it’s out of control,” says Eugene Steuerle, a senior fellow at The Urban Institute.

But the panel, known as the Independent Payment Advisory Board, has been among the most widely attacked parts of the law. House Republicans have cast it as the new “death panel” and introduced a bill to do away with it—even managing to attract two Democratic co-sponsors. Special-interest groups such as hospitals have already successfully hammered out deals with Democrats to exclude big industry players from the panel’s jurisdiction.

The health care law contains a number of other provisions to rein in costs without gutting essential benefits and eligibility. For example, what Republicans reviled last year as “$500 billion in cuts to Medicare” were actually reductions to government subsidies for private insurers who’ve been wasteful and inefficient in delivering care to seniors. The law also pays for research to help doctors determine whether pricey drugs and procedures perform any better than cheaper ones—a daily aspirin versus arterial stents, for instance, as a way to prevent heart attacks.

If the Democrats fail to defend their reforms, they may give their opponents leverage to undermine what they’ve already accomplished and stymie future efforts to control costs. ” If they repeal the parts but not the whole, we could end up with the bill’s cost-control wrecked but its spending intact,” notes Ezra Klein in Newsweek.

But Democratic strategists warn that their party could weaken its political message by focusing on health care details rather than Republican extremism. “It’s not a situation where we want to offer a contrast between that plan and the Republicans’ plan. We want to focus specifically on how terrible the [Ryan] plan is,” says Bocian. “Trying to massively change perceptions of [health care reform] before getting to full implementation is not easy.” Adds another Democratic political consultant: “The more they talk about it…well, they got destroyed [on the issue] in 2010.”

It seems that Republicans would like to bait the Dems into just such a discussion. Though Ryan’s plan isn’t politically feasible—or very popular, for that matter—the GOP may be betting that their opponents will fail to defend their own version of entitlement reform, effectively bestowing the badge of fiscal responsibility upon the Republicans. “The Democratic Party has demonstrated no real interest in getting serious about reining in unaffordable spending, or indeed reforming entitlements to a) prevent them from going bust or b) take the prospect of massive tax increases off the table,” says Liz Mair, a GOP strategist and former spokeswoman for the Republican National Committee. “Someone has to be the responsible party here, and it certainly isn’t the Democrats…these guys are kings of doing nothing.”

The Democrats have done a lot to save entitlements by passing the Affordable Care Act. But the public still doesn’t seem to know it—and the Dems will be putting their own achievements at risk unless they’re willing to defend and build upon them.