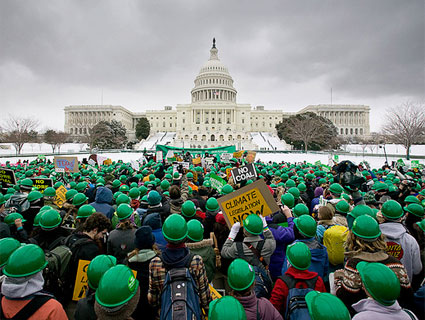 Thousands of youth gather on Capitol Hill in Washington, DC to call for a green economy, a safe sustainable future and binding climate legislation from the United States government. The rally followed on the heels of PowerShift '09, the largest climate change youth conference in United States history.ActionFactoryDC/Flickr

Will President Obama have a youth problem in 2012? In the 2008 election, young adults between the ages of 18 and 29 picked Obama over John McCain by a 2 to 1 margin. Energy and environment are two issues that young people cite as important electoral concerns much more regularly than older adults. And when it comes to energy and environment, the administration hasn’t had all that much luck getting things done.

So this weekend, when thousands of young people gather in Washington, DC for the massive youth climate and energy summit Powershift, there’s probably going to be a different vibe than there was at the last conference, in 2009. When I covered Powershift two years ago, there were more than 12,000 young people really excited about the new administration and the prospects for passing a climate and energy bill. Now no one thinks a climate bill is going anywhere for at least two more years and even an energy-only bill seems doomed to fail. Meanwhile, the solutions Obama has been talking about of late sound a whole lot like the same old, same old, highlighting offshore drilling, nuclear power, natural gas, and “clean coal.”

Courtney Hight, co-director of Powershift and the Energy Action Coalition, the group that has taken the lead in organizing the conference, knows this frustration well. After working for Obama’s primary campaign in New Hampshire in 2007 and the general election campaign in Florida in 2008, she took a post at the White House Council on Environmental Quality. But last June, amid frustration about how little was changing on energy and environmental policy, the 31-year-old left CEQ to take over the helm of the Energy Action Coalition.

“We can’t just work with the politics,” Hight told Mother Jones this week in the EAC office, amid dozens of volunteers scrambling to put the finishing touches on the conference. “We have to change the politics.”

A deciding moment for her, she says, was last year’s Gulf oil disaster. She expected angry citizens to be literally at the door of CEQ demanding policy change. But the angry mobs never really showed up. “It baffled me,” said Hight. It also pushed her back into organizing work.

For at least the past two years, the environmental movement has been almost singularly focused on passing a climate bill. But this year’s summit will focus more on training attendees in community organizing. EAC and other groups will have more than 700 trained organizers on site to train the thousands of other attendees on how to mobilize support back home. On Sunday they will also offer lobby training for attendees—all with the goal of putting pressure on Obama and Congress to make the right choices on energy and environment.

“Obama can be bolder,” said Hight. “We have to show him we need him to be.”