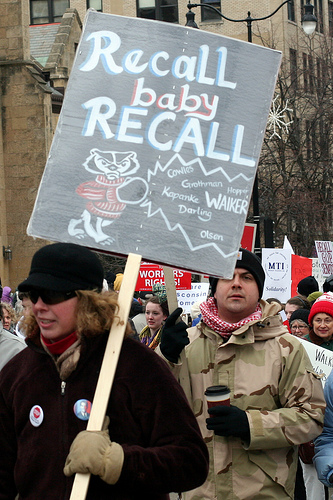 Randy Hopper, a Republican State Senator in Wisconsin, has had a rough few months. The target of a recall effort for his vote in favor of Republican Governor Scott Walker’s anti-union “repair” bill, Hopper suffered quite the embarassment in March when protesters arrived at his home in Fond du Lac in eastern Wisconsin. Demanding that Hopper come outside, the protesters instead encountered Hopper’s estranged wife, who explained that Hopper actually lived in Madison with a 26-year-old mistress. Next, it emerged that Walker’s chief of staff helped land Hopper’s mistress a prime job in the Wisconsin state government.

In the latest juicy news on Sen. Hopper, Raw Story reports that a letter from Hopper’s office lists for constituents a contact number that is in fact an adult chat line. Callers to the number are greeted with a voice saying, “Hey there, sexy guy…” It’s unclear how Hopper managed to send constituents to a service that bills itself as “the country’s favorite live talk,” but the gaffe is yet another headache for the embattled Republican.

Not as big a headache, of course, as Hopper’s impending recall election. Democrats gathered more than 23,000 signatures on their recall petition targeting Hopper, well over than necessary amount needed to trigger a new election. Hopper’s opponent in the recall election will be Jessica King, the deputy mayor of the city of Oshkosh. Hopper is one of four Republican State Senators who will face a recall election this year.