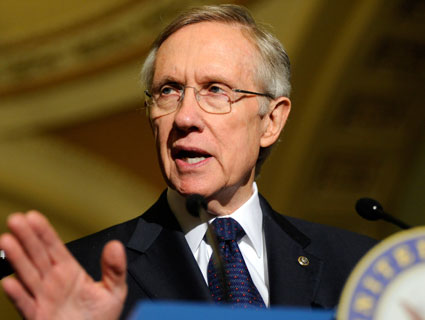 As lawmakers work to negotiate a grand bargain on the federal budget, top Senate Democrats hosted a conference call with reporters to insist that they won’t let social issues derail a deal to keep the government—and the still-nascent economic recovery—going.

The watchword of the day is “rider,” a term used to describe provisions tacked on to government funding bills that restrict how money can be spent. House Republicans wedged plenty of riders into their budget proposal, but some—including provisions to ban funding for Planned Parenthood and restrict the EPA’s ability to regulate greenhouse gases—are particularly galling to Democrats, who still control two-thirds of the government.

Sen. Harry Reid (D-Nev.), the Senate majority leader, also criticized the GOP’s cuts to Title X funding, which supports contraception and other health services for low-income women, and cuts to the Head Start program, which funds education programs for low-income families. “This should be the kind of thing upon which reasonable people can agree—that this is not the right thing to do,” Reid said. “It’s certainly not something over which it’s worth shutting down the government.” Sen. Dick Durbin (D-Ill.) echoed Reid: “Please don’t let the ship of state crash over riders…. let’s not shut down the government on a fight over some bumper sticker issue that may have been around for the last ten or twenty years.”

Durbin acknowledged that House Speaker John Boehner (R-Ohio) is stuck been a rock and a hard-charging, aggressive tea party. But Durbin said he also remains confident that the speaker understands the devastating implications of closing down the government. During the last shutdown, over $3 billion of exports sat idle in ports, according to Reid. “We’re calling on speaker Boehner to sit down and in good faith work with us. We’ve agreed on the number,” Durbin said, referring to the $73 billion in spending cuts for the 2011 budget negotiated by Vice President Joe Biden earlier this week. “Now it’s a matter of putting together the cuts that will achieve our goals of reducing spending in a responsible way.” If Boehner can do that, then he’s sure to find friends on the other side of the aisle, Durbin promised.

Sen. Chuck Schumer (D-N.Y.) also weighed in on Boehner’s intra-party dilemma. “We’re on the doorstep of a deal as long as the Speaker resists the tea party Republicans in the House,” he said. Because Boehner has been boxed in by the tea party, Schumer added, the Speaker will need the support of Democrats, and must look to make cuts to mandatory rather than domestic discretionary spending. “We’re going to insist that mandatory savings be part of any deal. Because otherwise the cuts become so deep on certain programs that they cut in the bone.”

Meanwhile, Reid said that the Democrats have found an unlikely ally in their fight to keep the government open: the Republican-leaning US Chamber of Commerce. Reid said that Chamber president Tom Donohue told a gathering of over 100 Republicans yesterday that they would be making a huge mistake shutting down the government. And the Business Roundtable, a group of CEOs of major U.S. corporations, warned that a government shutdown would kill the momentum the private sector has gained in recent months.