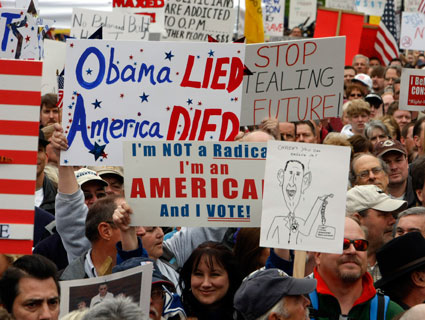 Ever since lawmakers hammered out a budget compromise at the zero hour last week, furious tea party leaders have been working the media circuit and threatening to “primary” the Republican traitors who voted for the deal. But is it all talk?

“I’m literally getting emails by the hour from people talking about primary challenges,” Meckler told The Ballot Box, adding that opposition to the deal among grassroots conservatives has been building all week…

“I’m hearing it from just about every district where someone voted yes [on the deal],” he said of the potential targets. “It’s a pretty easy list, actually. All you have to do is look at the roll call.”

Based on these parameters the tea party will ostensibly be gunning for some of the very people they worked so hard to put into office in November. That includes Rep. Allen West (R-Fla.), who spoke at a Tea Party Patriots “continuing revolution” protest on Capitol Hill just a few days before the budget vote, and voted for the deal.

What about budget hawk and man of the hour Rep. Paul Ryan (R-Wisc.)? He voted for the deal. Will tea partiers try to primary the lawmaker who put the deficit on the congressional map this year? Then there’s tea party favorite Rep. Mike Pence (R-Ind.), an arch conservative who many conservative activists consider an ideal presidential contendor. He, too, voted for the budget compromise, along with other conservative luminaries including Rep. Darrell Issa (R-Calif.), tea party upstart Rep. Vicky Hartlzer (R-Mo.), and Rep. Tom Price (R-Ga.), the tea party’s favorite doctor in the House during the health care fight.

Meckler also didn’t say whether he would be organizing a primary challenge to his own home district congressman, Rep. Tom McClintock, who is probably the most right-wing member of the California delegation. Meckler is reportedly tight with McClintock, a frequent speaker at local tea party rallies in Nevada County, California, where Meckler lives. Yep, McClintock also voted for the budget bill.

For tea partiers, making good on their primary threats will require attacking many of the congressional lawmakers who actually listen to them. In doing so, conservative activists risk losing what little ground they’ve gained in Washington.

Ultimately, the primary threats seem as much about publicity as political activism. Threats to target Boehner got Tea Party Nation’s Phillips on Glenn Beck’s show this week, even though he would be hard pressed to organize a well-attended rally much less a primary challenge. Despite Meckler’s claims that tea partiers are enraged by the recent budget deal, that anger largely seems to be manifesting itself during Meckler’s cable appearances. When his group held a protest over the budget bills in DC at the end of March, only a handful of tea partiers showed up. The event paled in comparison to the mega-rallies organized during the health care debate

The lack of visible signs of mass anger is no surprise. After all, the budget deal struck last week was a huge win for the tea party, and one that came on the heels of significant electoral successes during the midterm election. But if tea party leaders actually declared victory and dialed down the outrage, they might find their movement on the path to irrelevance. So perhaps their strategy is just to keep on shouting and issuing threats, even if they’re empty ones.