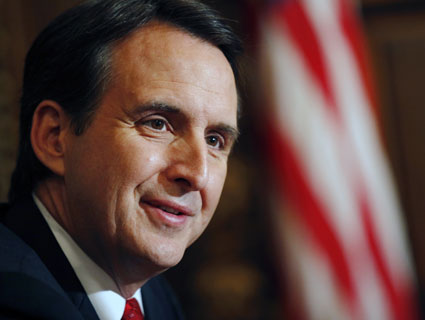 If there ever is a time when the No. 2 spot is a good position to hold in a presidential primary contest, 2012 could be it—and former Republican Minnesota Gov. Tim Pawlenty might end up glad for that.

Earlier this month, the politerati were abuzz over a National Journal poll that found that Washington Republican insiders, when asked to pick the likely winner of the ongoing GOP nomination contest, ranked Pawlenty second, behind ex-Massachusetts Gov. Mitt Romney. Pawlenty had jumped a fair bit in this poll from the start of the year—and the conventional wisdom was reinforced: Pawlenty is the non-Romney default candidate. That is, he’s the favorite second choice of GOP insiders and, perhaps, actual Republican voters.

This stands to reason. Though Pawlenty, like Romney, was something of a moderate Republican as governor, he doesn’t have Romney’s baggage: He didn’t enact statewide health care reform (imposing a mandate); nor is he a member of the Mormon Church, which some evangelical Christians view with suspicion or outright hostility.

Pawlenty, a nice fellow from the Land of 10,000 Lakes, has experience appealing to independent voters. And now he’s pandering to the tea party—at a rally in February, he called on the assembled activists to “rise up”—and the religious right. (He’s called for repealing the repeal of the military’s Don’t Ask, Don’t Tell policy.) So he has range. More important, Pawlenty is a lot of nots: He’s not an extremist (Michele Bachmann, Rick Santorum, and Sarah Palin). He’s not undisciplined (Newt Gingrich). He’s not a good ol’ boy/insider lobbyist (Haley Barbour). He’s not a former Obama administration official (Jon Huntsman). And he’s not Romney. Pawlenty is the perfect fall-back guy. Strike all these other wannabes off the list for their obvious liabilities, and Pawlenty is the last man standing. “He’s largely liked by the party,” says GOP strategist Doug Heye. “I’m hard-pressed to name people who dislike him.”

For the time being, Pawlenty may well be Mr. Second Choice. Yet in the 2012 campaign, inhabiting that spot will come with a benefit not available to previous presidential challengers, thanks to a new Republican Party rule.

Last summer, the GOP held one of its regular meetings and fussed with its rules. The main news was that the party pushed back the ever-creeping-earlier primary schedule. The party decided that the four designated early states—Iowa, New Hampshire, South Carolina, and Nevada—can initiate primaries or caucuses on February 1, 2012, or beyond. (Iowa kicked off the 2008 season on January 3.) No other state can proceed until March 6, 2012. But the Republicans added a condition: Any state that wants to hold a primary or caucus in March 2012 must allocate its selected delegates “on a proportional basis.” That means no winner-take-all victories in these states—a change that could provide a tremendous boost to a candidate who racks up a lot of second-place finishes.

In past Republican presidential contests, most states used some version of a winner-take-all calculation to award delegates. That tends to allow a frontrunner to quickly build up an overwhelming lead. In 2008, the race was close in the early phase. Mike Huckabee won Iowa, with Romney placing second, and Fred Thompson, third. McCain took New Hampshire. Romney triumphed in Michigan and Nevada. McCain edged out Huckabee in South Carolina. The delegate count was competitive. Then came Florida—a pure winner-take-all-state. McCain beat Romney, 36 to 31 percent, and pocketed all 57 delegates. (The state lost half of its delegates because it held its primary early, in violation of GOP rules.)

A week later was Super Tuesday; 15 of the 21 states staging contests that day employed some sort of a winner-take-all formula, most notably, California. McCain won the Golden State, 42 to 35 percent and bagged 158 delegates; Romney’s consolation prize: 12 delegates. McCain also grabbed New York’s 87 delegates, New Jersey’s 52 delegates, and all but 3 of Illinois’ 57 delegates. When the night was done, McCain had won 9 of the 21 states, but he had collected 568 delegates to Romney’s 176 and Huckabee’s 147. He now possessed nearly 60 percent of the total number of delegates needed to claim the nomination. Two days later, on February 7, Romney abandoned the race.

Had there been proportional allocation of the delegates, McCain’s lead at this point would have been significant, but perhaps not insurmountable. The contest likely would have stayed competitive far longer. Romney and Huckabee would have had the opportunity to punch away at McCain and try to force a game change.

In 2012, a consistent and close second-place finisher could stay in the race beyond the first waves of primaries and have a chance of orchestrating a turn-around. And no one, at this stage, says “second-place” more than Pawlenty.

Presently, it’s unclear what state parties must do to meet the GOP’s new “proportional basis” rule. Republican Party HQ hasn’t established any guidelines or specific requirements. A state party could perhaps concoct a sliding scale that dramatically favors the winner. But any proportionality introduced into the mix will enhance the prospects of a second-placer. The full shape of the 2012 field has not yet materialized, and there’s no telling if it will include more than one candidate with a shot at winning individual contests. Yet if that turns out to be the case, a candidate who continues to place second could stay in the hunt, as other candidates take turns placing first.

Pawlenty has multiple reasons for relishing a No. 2 spot. It puts him within striking distance, and he’s poised to assume the lead, should Romney fizzle or flame out. He’s also not the candidate in the pack with a big bull’s-eye on his back. (That’s the frontrunner.) And this year, most important, a strong second-place-man will be able to bag more delegates than before. When Pawlenty looks in the mirror in the morning, he may be quite delighted to declare to himself, “We’re No. 2!”