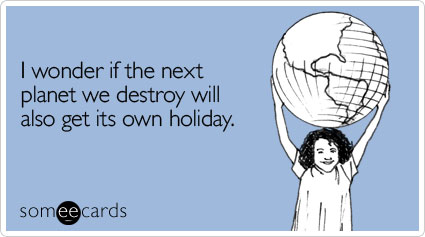 Confession: I can’t stand Earth Day. I know I’m not alone; by time I was born it was already getting a little cliché. And I actually do believe the equally tired idea that it should be every day, not just one single 24-hour period at the end of April that sometimes coincides with both Easter and Passover and the hockey playoffs. The reason I dislike it so much is that it has become just another excuse to peddle products of dubious “green” credentials and host events that involve celebrities in the lower-B-list category.

But I’m finding it especially hard to handle this year. Wednesday was the first anniversary of the Gulf oil disaster. It also comes against the backdrop of last year’s total failure to pass a climate and energy bill in the Senate—or pass even the most basic legislation responding to the oil spill, arguably the worst environmental disaster in US history. Frankly, this Earth Day sucks because it just serves to remind me that the environmental movement is not exactly the powerhouse it was 41 years ago. Back then, millions of Americans mobilized not just to honor the environment as something worth protecting, but to demand that their leaders do something about it. The Environmental Protection Agency, the Clean Air Act, and the Clean Water Act as we know them today are all products of that generation of environmental activism.

If you can’t make hay of a disaster—a visible, fast-moving one like the oil spill or a less tangible one like climate change—is there any hope of changing things? I know that the country’s leading environmental groups have spent a good deal of the past year discussing, at least internally within individual groups, where the heck they went wrong. But there is still an unwillingness, it seems, to have a real conversation between groups and in the progressive community more broadly about what went wrong and what can be done better in the future.

To that end, a report released earlier this week has been creating a stir in the green world: In Climate Shift, Matthew Nisbet, a communication professor at American University, evaluates why environmental groups failed to pass a climate bill. It’s generated quite a bit of controversy on two particular points—one, the conclusion that green groups actually outspent foes of the legislation and two, that media coverage of climate science has actually been pretty good. (Full disclosure: My partner is a colleague of Nisbet’s at AU.)

Joe Romm at Climate Progress has been highly critical of the first point, and I agree that it doesn’t make much sense to include the entire lobbying budget of a company like BP in the “pro-climate-bill” side of the ledger for several reasons. The company clearly spent money lobbying on other things, and I would also dispute the idea that the businesses involved in advocating for climate legislation were advocating for exactly the same kind of bill that environmentalists would like to see. Sure, there was a formal partnership involving some green groups and companies under the umbrella of the US Climate Action Partnership. But that was sort of a move of desperation on both parts—the companies were afraid of much harsher rules coming from the EPA, and the environmental groups were scared that if they didn’t partner with big business, they weren’t going to get anything. And many of the “partners” in that effort were advocating for a much weaker bill than environmental groups would have liked to see. (Nisbet responds to this criticism here.)

On the point about the media coverage, Chris Mooney has a strong critique over at Discover, to which Nisbet also responded in the comments.

Fair criticism aside though, I don’t think the report should be dismissed in its entirety, and the defensiveness on display in the green blogosphere has been disappointing, to say the least. There’s a lot of useful analysis of communication strategy in there, and anyone who is honest about the situation knows that there are probably better ways for environmental groups to be spending their money. It’s also hard to ignore Nisbet’s points about why it’s problematic that most of the major mainstream environmental groups have moved away from a membership model and are now largely divorced from the broader public. Too many of the green organizations have been trying to play the inside game in Washington while neglecting more participatory models of engagement outside the Beltway. Also salient is his point that the professionalized and hierarchical set up of many groups today “may also limit their ability to appeal to younger generations of Americans.” I would add that treating “the environment” as an issue separate from economic, human rights, and social justice concerns also alienates a lot of young people.

Here’s the other thing: Even if I did agree with the conclusion that green groups outspent foes of climate legislation, I don’t know that it would change things that much. Environmentalists lost anyway, because they have less sway in Washington today, plain and simple. The solution then is to build political power and convince lawmakers that your concerns are important, rather than constantly reminding everyone that you’re the underdog.

So for Earth Day this year, maybe all of us who care about meaningful environmental change can stop yelling at each other for a while and start having a constructive conversation about ways to make the next few years suck less.