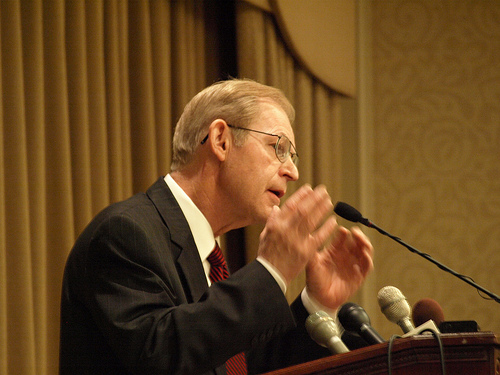 In a stunning turnaround, the county clerk for Waukesha County, a heavily Republican district in southeast Wisconsin, announced on Thursday evening that she’d failed to count more than 14,000 votes cast in Tuesday’s state Supreme Court election. The error, disclosed by a former state GOP lawmaker who’s been criticized for her handling of local elections, handed conservative incumbent David Prosser a lead of 7,582 votes, flipping the result of the race after an initial tally put liberal JoAnne Kloppenburg ahead by a mere 204 votes.

The Waukesha clerk, Kathy Nickolaus, a Republican, said in a press conference that the new votes, all of which were cast in the city of Brookfield, were missed because of human error that’s “common in this process.” Nickolaus apologized for the mistake, saying, “The purpose of the canvas is to catch these kind of mistakes.”

This isn’t the first time Nickolaus’ role in overseeing elections in Waukesha has been engulfed in controversy. In 2010, the Milwaukee Journal-Sentinel reported that she bucked the traditional election results system in Wisconsin and instead kept the county’s election results on “stand-alone personal computers accessible only in her office.” Nickolaus cited security reasons for her unorthodox method. Not surprisingly, she received plenty of criticism for her unique handling of elections:

Director of Administration Norman A. Cummings said because Nickolaus has kept them out of the loop, the county’s information technology specialists have not been able to verify Nickolaus’ claim that the system is secure from failure.

“How does anybody else in the county know, except for her verbal word, that there are backups, and that the software she has out there is performing as it should?” he said. “There’s no way I can assure that the election system is going to be fine for the next presidential election.”

Other counties in Wisconsin also discovered additional votes throughout the day as they check their totals, but none of the changes were as drastic as Waukesha’s. For instance, Winnebago County amended its vote total earlier on Thursday, giving Prosser a razor-thin 40-vote lead. Then Grant County released its revised totals, subtracting 113 votes from Prosser and restoring Kloppenburg’s lead.

It’s been a wild day in Wisconsin, and with further recounts and legal challenges likely to come, there’s a ways to go before a winner is officially crowned. But the sudden revelation of more than 14,000 previously untallied votes in Waukesha is sure to fuel plenty of conspiracy theories and Gore-Bush 2000 comparisons in the days to come.