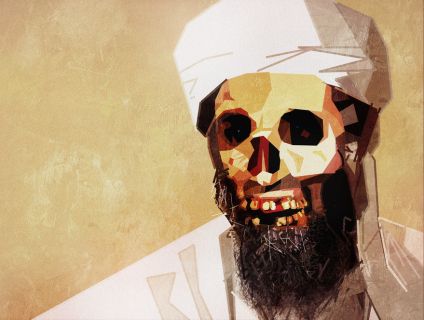 On the English-language Islamic Awakening web forum for friends of jihad, Saif Ul Haq started a new thread just after 11 p.m. Eastern time Monday with a single sentence: “I just saw on the news that they killed Osama and will be showing his body soon.”

Minutes later, another poster responded: “shut up and delete this thread.”

So began the long, difficult journey of defeat and disillusion for sympathizers of Osama bin Laden, mastermind of the 9/11 attacks on America, on learning that US forces had killed him in a Pakistani safehouse. What followed in the next hours was an online outpouring of denials, anger, and muted acceptance—not only from Islamist militants and sympathizers, but from domestic political critics of President Barack Obama, as well.

“I will wait for the Mujahideen to confirm this, and will not believe until I see a picture of his dead body,” wrote one jihadi sympathizer on Islamic Awakening (IA)—one of several such forums provided to Mother Jones by Aaron Y. Zelin, a researcher at Brandeis University who tracks online militant activities on the website Jihadology.net.

This sentiment, and many others by Islamists, were echoed by conservative detractors of the president. “Obama can claim what ever he wants but his word is no good,” wrote one commenter on the right-wing site Free Republic. “Without proof that Osama is dead and staying dead, I don’t have to believe anything he says.”

The “Osama is still alive” theory, in fact, gained traction with Islamists and right-wingers alike through the night after the Pakistani Taliban released a statement to that effect and the White House announced Bin Laden would be buried at sea. “Good news brothers,” wrote one IA commenter. “Its aired on pakistani news channel ,the word of taliban that Shaykh Osama is alive!” About the same time on Free Republic, a poster calling himself salamander wrote: “The commie muzzie usurper in chief had better release photos and videos toot sweet. WTF with this burial at sea before the body is cold?…Something about this smells.”

Among those who took the president at his word, the jihadis and right-wingers expressed anger…albeit for different reasons. Some Muslims suspected that Bin Laden had been defiled, in life and in death. “Brothers and Sisters,” wrote one IA poster, “ive recieved disturbing news that the Sheikh was tortured before being shot, Their are videos reportedly surfacing of…a plunger being stuck in his rectum before being shot… MAY ALLAH destroy these barbarian kuffar.”

Conservatives, on the other hand, were concerned that the sea-burial plan, undertaken according to Muslim edicts, was too respectful an epilogue for a terrorist. “This is pathetic and I am sick of kissing up to Muslims, of which our president is one,” wrote dayglored on Free Republic. “Muslim and Arab leaders all over the world are threatening the USA, and endorsing the slaughter of Christians and Jews on a daily basis. This is not an ending, this does not satisfy justice.”

Whether or not the White House lied about killing Bin Laden, many jihadis and right wingers seemed to agree that Obama was looking to score political points. Papa Ray, a commenter on the right-wing military blog Blackfive, wrote:

Congrats to our heros for taking out the garbage! But for the pols, WTF took so long if he was located last August?? What’s up with that? Could it be the great reincarnation of Barry the Shifty One starting his All American campaign? He moves Petraeus out of the way with a new job, and clears up the birth certificate distraction. Let’s see him, personally, so something about JOBS in this country, and the “how do you spell D-E-F-I-C-I-T’ problem?

Obama takes credit: “Today, AT MY DIRECTION.” Spare me.

I’m happy for our troops, not the campaigner in chief. I know the truth the Obama didn’t mention tonight.

only the easily bullshitted have swung Obama’s way. This doesn’t fix our economy!

Grisham’s feelings (about everything but the shirts) were mirrored by the IA Islamists. “The gist of [Obama’s] speech unequivocally bares election-driven character,” wrote Abu Abdallah al-Bulghari on IA. “That’s what all we are to Kuffaar [infidels]: not friends (of course), not honest business partners, not enemies – pawns in their election battles.”

Another user, Yahya, argued that the Pakistani army had actually held Bin Laden for some time before Sunday. “they were waiting for the right time to benefit americans to show him to world after killing him,” he wrote. “nowadays american economy was so low that americans were near the brink of protests so now americans will forget there situation for while.”

Free Republic user imfrmdixie agreed that Obama was playing politics, but added an Islamophobic twist. “Who wants to bet Obama didn’t know a thing about this when it happened,” he wrote. “He claims he all but pulled the trigger in his earlier Me! Me! Me! speech but I suspect we kept it from him out of fear he’d blab to his Muslim Brotherhood/AQ buddies.”

Closer to the battlefield, though, active-duty US troops were a little more circumspect…and respectful. “What matters the most that someone who did so much damage to the United States 10 years ago is done,” Army Maj. Eric Archer told Military Times from Bagram Air Base in Afghanistan. “We heard the news on the TV and everyone in the room, there was silence—it was electrifying, that this person that did so much damage and harm to all of us here was finally done, and I think that’s the end state and that’s what matters.”

Another soldier at Bagram, Spc. William Baxter, had a much simpler thought for the Times‘ reporter.