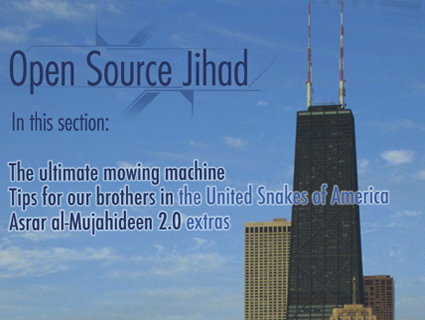 Osama bin Laden condemned a Canadian-born supporter’s macabre plan to “mow down the enemies of Allah” on US streets using a tractor or pickup truck fashioned with “butcher blades,” considering the plot just too bloodthirsty, according to documents taken from the now-dead 9/11 organizer’s hideout and revealed to reporters late Wednesday.

ProPublica spoke with unnamed US officials, who shared details gleaned from bin Laden’s personal writings, recovered when Navy SEALs killed him last week in Abbottabad, Pakistan. Among the details were these:

Bin Laden was bent on inflicting mass-casualty attacks on the West, the U.S. official said. At the same time, however, he criticized an online propaganda magazine edited by a young American in Yemen, saying the bloodthirsty tone of an article could harm al Qaeda’s image among Muslims, according to the U.S. counterterror official.

The magazine, called Inspire, “apparently discussed using a tractor or farm vehicle in an attack outfitted with blades or swords as a fearsome killing machine,” the official said. “Bin Laden said this is something he did not endorse. He seems taken aback. He complains that this tactical proposal promotes indiscriminate slaughter. He says he rejects this and it is not something that reflects what al Qaeda does.”

On its face, it seems unthinkable that a terrorist commander who organized the flying of fuel-laden jetliners into massive buildings would have considered auto-bludgeoning farm tractors beyond the pale. Nor was it apparent why, after claiming responsibility for the 9/11 attacks, the embassy bombings, the USS Cole, London’s 7/7 killings, and multiple other assaults, bin Laden would have expressed concerns about promoting “indiscriminate slaughter.” But the details of that Inspire magazine plan, called “The Ultimate Mowing Machine” (PDF), evince a truly depraved (if humorously lunatic) mind at work—one that not only alarmed bin Laden, but outlived him, as well.

That plan was advanced in Inspire‘s Fall 2010 issue by one “Yahya Ibrahim.”* In the magazine piece, which is festooned with a Toby Keith-style advertisement for a Ford super-duty truck, Ibrahim explains how “to use a pickup truck as a mowing machine, not to mow grass but mow down the enemies of Allah”:

You would need a 4WD pickup truck. The stronger the better. You would then need to weld on steel blades on the front end of the truck. These could be a set of butcher blades or thick sheets of steel. They do not need to be extra sharp because with the speed of the truck at the time of impact, even a blunter edge would slice through bone very easily. You may raise the level of the blades as high as the headlights. That would make the blades strike your targets at the torso level or higher.

Pick your location and timing carefully. Go for the most crowed [sic] locations. Narrower spots are also better because it gives less chance for the people to run away…To achieve maximum carnage, you need to pick up as much speed as you can while still retaining good control of your vehicle in order to maximize your inertia and be able to strike as many people as possible in your first run. Keep in mind that as soon as people realize what you are up to, they would scatter and run in every direction looking for cover. They would look for areas where the vehicle cannot reach them. Therefore, it is important to study your path of operation beforehand…

If you have access to firearms, carry them with you so that you may use them to finish off your work if your vehicle gets grounded during the attack…This idea could be implemented in countries like Israel, the U.S., Britain, Canada, Australia, France, Germany, Denmark, Holland and other countries…In such countries we may strike at the public at large. As long as they target our non-combatants, we will target theirs.

Nowhere, however, does Ibrahim explain precisely how an aspiring shahid is supposed to drive his multi-bladed mobile death machine on American roads to his destination without arousing just the teeniest bit of suspicion. Yet according to the officials who spoke with ProPublica, bin Laden’s written condemnation of this plan focused not on its almost-humorous logistical stupidity, but on its strategic counterproductivity: Al Qaeda needed a less-bloodthirsty image with global Muslims.

Bin Laden prevailed at the time; but of course, now bin Laden is dead, raising the question of whether any of his disciples might be willing to construct this slicing, dicing 12-cylinder parade float. Ibrahim certainly hasn’t shown a willingness to take up the fight himself. “After such an attack, we believe it would be very difficult to get away safely and without being recognized,” he wrote, with considerable understatement. “Hence, it should be considered a martyrdom operation. It’s a one-way road.” Ibrahim’s only personal sacrifice has been to continue his work editing and writing for Insight, with its ever-present risk of papercuts.

* Editor’s note: An earlier version of this story misidentified the author of the Insight article.