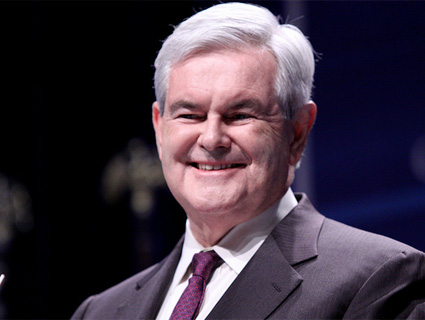 Newt Gingrich, as you might have heard, has tied the knot again: between himself and a presidential campaign. As of today, he is officially a candidate for the Republican presidential nomination. One issue he will have to confront—perhaps repeatedly—is his less-than-family-values past: three wives and two messy divorces. The story is well known: he left wife No. 1 for wife No. 2. Then, while he was Speaker of the House and leading the impeachment crusade against President Bill Clinton, he trysted with congressional aide Callista Bisek, whom he later married, after leaving wife No. 2 (Marianne).

None of this is a secret, and Gingrich hopes to defuse this story line by placing Callista in the limelight. Yet, his jump into the presidential pool will likely produce a series of tales and news reports about Gingrich’s bad-boy days, for as long as he remains in the race. In a presidential contest, biography matters much. And fresh details—even about well-known episodes in a candidate’s past—are much valued, at least by reporters and cable news viewers. Thus, Gingrich may find it tough to escape the tawdry escapades of his earlier decades.

To wit: this morning, as news of Gingrich’s pending announcement spread, a fellow I know sent the below email.

A long time ago in a place far, far, away I was a military escort officer at [NATO] Supreme Headquarters Allied Powers Europe (SHAPE), assigned to meet, brief, escort, and coordinate the visit of then-Speaker of the House Gingrich and a [congressional] leadership CODEL of some 6 others and spouses in Europe. Bosnia was the “Iraq” of the day and that was one of the focused points of interest. We based out of Rome with day trips to various US military Headquarters in Europe and “down range” trips to several of the bases in Bosnia….Also on the trip were Bob and Bonnie Livingston. In that it was a “Leadership” trip, the chairs of several committees were also along.  And the wives were traveling in number as well…

After a day trip and audience with the Pope, the entire group returned to the hotel, and I placed myself in the hospitality room to be available for questions about the rest of the trip.  Around 11 PM Gingrich came in and started to shoot the bull. We talked mostly about military readiness, the lack of spare parts (a huge issue in those years), the strain of Bosnia on the deployed forces (nothing compared to today) and general stuff. He called it a night about 1 AM and I closed up shop long with some of the other military personnel.

The next morning the traveling Marine [with the congressional delegation] pulled me aside to rip me a new backside for keeping the Speaker up until 4 AM.  I told him 4 AM was bunk, that he was in bed at 1, and it was his choice to stay up and talk not mine. Turns out that Marianne Gingrich had found the Marine escort and chewed him out for the Speaker not coming to bed until 4 AM. Seems there were three missing hours…And now for the rest of the story…Also on the trip and traveling as staff was…Gingrich’s current wife, presidential spouse aspirant and then congressional staffer Callista. Seems that the then-Speaker scheduled himself a traveling “storm in any port.” I never discussed it with him but only after the fact did I fully realize what was going on. None of us knew what would be public information later on…That was also the trip that I spilled an entire bottle of red wine on Gephardt, but that’s another story.

This episode doesn’t truly say anything new about Gingrich, for it’s known that he was sneaking around with Callista while Speaker of the House. But it does show Gingrich explicitly (comically?) in non-family-friendly mode. More important, there must be dozens (hundreds? thousands?) of stories like this one. Many will seep out, as long as Gingrich is a candidate for the highest office in the land. Positioning a smiling Callista by his side will not stop that.