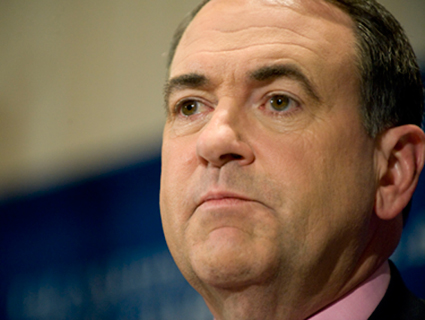 Mike Huckabee’s close ties to far-right activists helped propel him to a second-place finish in the race for the GOP presidential nomination in 2008. But as the former Arkansas governor mulls another White House run, the incendiary remarks and outright paranoia of one of his close advisers serve as a reminder that Huckabee’s greatest asset—his relationship with the religious right—may also be one of his greatest vulnerabilities.

Huckabee has joked that he “answers” to “two Janets.” One is his wife, Janet Huckabee. The other is Janet Porter, the onetime co-chair of Huckabee’s Faith and Values Coalition. And Porter, the former governor has said, is his “prophetic voice.” But that voice has said some weird things over the years: Porter has maintained that Obama represents an “inhumane, sick, and sinister evil,” and she has warned that Democrats want to throw Christians in jail merely for practicing their faith. She’s attributed Haiti’s high poverty rate to the fact that the country is “dedicated to Satan,” and she suggested that gay marriage caused Noah’s Flood. And there’s this: In a 2009 column for conservative news site WorldNetDaily, Porter asserted that President Barack Obama is a Soviet secret agent, groomed since birth to destroy the United States from within.

Porter’s long history in the Christian right made her a natural ally for Huckabee, a former Baptist preacher, as he laid the foundations for his  presidential run in 2007. An acolyte of the late televangelist D. James Kennedy, Porter rose quickly through the ranks of the Christian right, first as director of the Ohio Right to Life chapter in the 1990s. Later, she founded and served as president of Faith2Action, a right-wing group that promotes a theory known as Christian Dominionism—in which Christians are duty-bound to control the instruments of government in advance of the second coming of Christ.

Porter, in turn, seemed enamored with the candidate. In WorldNetDaily, she lavished praise on Huckabee. At one point, she composed a medieval ballad in which Huckabee, referred to as “Sir Mike-A-Lot who we all Like a lot,” slayed Hillary Clinton (represented by the “the evil queen and her dragon of slaughter”). Huckabee eventually signed Porter up as co-chair of his Faith and Family Values Coalition, a prestigious group of evangelical who’s-who’s tasked with reaching out to religious voters.

Porter had strong words for Huckabee’s competition, as well. She publicly suggested that former Health and Human Services Secretary Tommy Thompson might be the anti-Christ. In the lead-up to the Iowa caucuses, she cut an ad attacking Huckabee’s two most serious rivals, Mitt Romney and John McCain. The ad was paid for by RoeGone, a short-lived 527 formed by a Porter deputy with the stated ambition of becoming the conservative MoveOn.org (it fizzled).

Porter’s most dramatic arguments for Huckabee centered on what she believed was the impending prohibition on Christianity—the subject of her 2004 book, The Criminalization of Christianity: Read This Book Before it Becomes Illegal! In her view, the 2008 election represented a make-or-break moment for people of faith. “I’m writing this letter from prison, where I’ve been since the beginning of 2010,” she began one column. “Since Hillary was elected in ’08, Christian persecution in America has gotten even worse than we predicted.”

Her efforts for Huckabee did not go overlooked by the candidate. In his campaign memoir, Do the Right Thing, he calls her a “prophetic voice,” and includes Porter on a short list of evangelicals—including Left Behind creator Tim LaHaye—who made his rise possible. He singles her out for praise for helping to organize the Values Voters Debate and credits her prayers and fasting with his strong performance at a “turning point” in the campaign.

“We met and prayed together and there was a special defining moment for me if not for the others,” he writes. “Bondage to my fears about whether I was to continue was broken, and bonds of friendship were formed that night with people like Janet Folger [Porter’s maiden name] and other who came to play a major role in what was later to be labeled by the press and known as a ‘Huckaboom.'”

Since the 2008 election, the two have largely gone their separate ways. For Huckabee, that meant a well-paid gig on Fox News as the host of his eponymous television show. Porter, meanwhile, found a new target in the current president—a topic she explored in the detail in the pages of WorldNetDaily.

“Brace yourself for what I am about to say next,” Porter began one column, published shortly after the inauguration. She then detailed an email that had been forwarded to her raising questions about the president’s status as an American citizen. But that was the least of it: If the email were correct, the president was a Soviet agent—and so were his parents. He had been conceived, in other words, with the sole purpose of destroying the nation from within.

As Porter explained, the letter had originally been composed by a software developer named Tom Fife. “All I know is that Tom Fife is a real guy—not some e-mail scam,” she wrote. “I’ve talked to him.” In the email, Fife recounted a dinner-party conversation he’d had with a Soviet scientist in Moscow in the early 1990s.

“Since I had dabbled in languages,” Fife wrote, “I knew a smattering of Arabic. I made a comment: ‘If I remember correctly, ‘Barack’ comes from the Arabic word for ‘Blessing.’ That seems to be an odd name for an American.’ [The Soviet scientist] replied quickly, ‘Yes. It is ‘African,’ she insisted, ‘and he will be a blessing for world Communism. We will regain our strength and become the number one power in the world.'”

From there, Porter’s rhetoric only escalated. Last summer, she lost her syndicated radio show after organizing a rally at the Lincoln Memorial to urge Christians to take over the United States government. And this spring, she made headlines by summoning a fetus to testify on behalf of an Ohio measure banning abortions after a heartbeat has become detectable. (Huckabee has endorsed the bill).

Porter did not respond to a request for comment from Mother Jones.

Huckabee’s greatest asset has always been his ability to speak two languages—one to his base, and one to everyone else. But that may not last if he decides to run again. His most recent appearance on the normally friendly confines of The Daily Show was dominated by a discussion of his admiration for discredited amateur historian David Barton, whom Huckabee says Americans should be “forced at gunpoint” to listen to.

The former Arkansas governor has thus far stayed mum on whether he will leave his cushy Fox News show to run for president. But like Porter, Huckabee himself has drawn criticism for his embrace of conspiracy theories surrounding Obama’s upbringing. In March, he told the American Family Association’s Bryan Fischer that the President’s worldview was shaped by Kenyan upbringing (he later back-tracked).

Huckabee, contacted through his political action committee, did not respond to a request for a comment. The Soviet Union, which dissolved in 1991, also could not be reached.