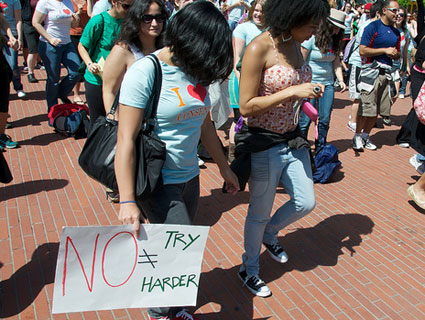 They’re doing it again: After jettisoning controversial legislative language narrowing the definition of rape for the purposes of abortion law, House Republicans are attempting a backdoor maneuver to ensure that solely victims of “forcible rape” are eligible for federal funding if they seek abortions.

In February, Republicans drew widespread condemnation for their “forcible rape” proposal, which legal experts said would have excluded statutory rape victims and others from obtaining abortions through Medicaid. Amidst public outcry and a protest campaign by left-leaning groups, Republicans abandoned the language, which had been included in the “No Taxpayer Funding for Abortion Act,” a bill the GOP leadership numbered H.R. 3 to signify its high priority to the party. But while they’ve amended their legislation, which faces a floor vote in the House on Wednesday, Republicans haven’t stopped trying to narrow the already small exception under which federal funding for abortions is permissible. They’ve used a sly legislative maneuver to make sure that even though the language of the bill is different, the effect remains the same.

The backdoor reintroduction of the statutory rape change relies on the use of a committee report, a document that congressional committees produce outlining what they intend a piece of legislation to do. If there’s ever a court fight about the interpretation of a law—and when it comes to a subject as contentious as abortion rights, there almost always is—judges will look to the committee report as evidence of congressional intent, and use it to decide what the law actually means.

In this case, the committee report for H.R. 3 says that the bill will “not allow the Federal Government to subsidize abortions in cases of statutory rape.” The bill itself doesn’t say anything like that, but if a court decides that legislators intended to exclude statutory rape-related abortions from eligibility for Medicaid funding, then that will be the effect.

“There is absolutely no legal basis to this claim,” says George Washington University’s Sara Rosenbaum.

“Unfortunately, it is sometimes the practice on Capitol Hill for Members of Congress and their staffs to use [committee] reports…to try to manipulate the meaning of the language passed by Congress,” says Ann O’Leary, a lecturer at the University of California-Berkeley’s law school who served as Hillary Clinton’s legislative director when Clinton was in the Senate. “It is clear here that the committee report tries to narrow the meaning of rape.”

By removing the forcible rape language from the bill but then using the committee report to claim that the bill would not allow Medicaid funding for abortions in cases of statutory rape, Republicans seem to be trying to “have their cake and eat it too,” says Karl Manheim, a constitutional law professor at Loyola University Law School who has also worked as a congressional staffer. “This is very typical,” he says. “This will be a big battle if [the bill] passes. It will be challenged for its exclusion or inclusion of statutory rape.”

Republicans argue that they’re not changing anything. They say that an existing law, the Hyde Amendment, already prevents Medicaid from paying for abortions in cases of statutory rape. They even claim as much in the committee report. But that’s just not true, according to the Centers for Medicare and Medicaid Services (CMS), which works with state agencies to administer Medicaid. “There is no such distinction in Hyde,” a CMS spokeswoman told Mother Jones after consulting the office of the agency’s general counsel. “It is not current law. Hyde does not make a distinction between statutory rape and any other kind of rape and states are not free to make such distinctions.” [Read more from CMS here.]

The Hyde Amendment, which was first passed in 1976, forbids the use of federal funding to pay for abortions via Medicaid or other health services. Originally, Hyde only allowed such funding to save the life of a pregnant woman, but in 1993, abortion rights supporters forced through two additional exceptions that allow Medicaid to fund abortions in cases of rape or incest. Those rape and incest exceptions have stood ever since.

Republicans offer no evidence—not even a footnote—for the committee report’s claim that Hyde distinguishes between statutory and “forcible” rapes. And no such evidence seems to exist. Congressional Quarterly‘s summary of the legislative history of the current version of the Hyde Amendment contains no mention of statutory rape. If lawmakers at the time had intended for statutory rapes to be ineligible for Medicaid funding, they don’t seem to have said anything about it.

“There is absolutely no legal basis to this claim,” says Sara Rosenbaum, a health law expert at George Washington University law school. “The Amendment itself would need to clarify such an important limitation, and there is no evidence that affected federal agencies have interpreted or applied the law in this way.”

The majority staff of the House judiciary committee, which produced the report, declined to provide any evidence for the claims in the report or to comment on the subject. The office of Rep. Trent Franks (R-Ariz.), who introduced the amendment stripping the forcible rape language from the bill, didn’t respond to questions from Mother Jones.

Why would Republicans try to sneak in this language? A look at the history of H.R. 3 provides some potential answers. Both Richard Doerflinger of the US Council of Catholic Bishops and the NRLC’s Johnson, arguably the two most influential anti-abortion lobbyists on Capitol Hill, have offered the same explanation for why the “forcible rape” language was originally introduced: Johnson said it was intended to fend off a “brazen effort,” by abortion rights groups to exploit the rape exception in Hyde. Abortion rights groups were, in Johnson’s words, planning to “federally fund the abortion of tens of thousands of healthy babies of healthy moms, based solely on the age of their mothers.” Doerflinger argued in congressional testimony that the language was “an effort on the part of the sponsors to prevent the opening of a very broad loophole for federally funded abortions for any teenager.”

Doerflinger and Johnson’s words are echoed in the Republicans’ committee report. Immediately after arguing that Hyde and H.R. 3 prohibit federal funding of abortions in cases of statutory rape, the Republicans write:

This is some tricky language. It’s true, but it’s meaningless, and it has nothing to do with statutory rape. There’s an obvious difference between “federal funding of abortion based solely on the youth of the mother” and federal funding of abortion based on a reported, prosecuted, or otherwise documented case of statutory rape. Doerflinger and Johnson’s comments seem to elide that difference, and so does the committee report.

In any case, it seems hard to fathom that Planned Parenthood and other abortion providers could get away with charging the government for abortions performed on “tens of thousands” of teenagers. Currently, the Hyde Amendment exceptions for rape, incest, and the life of the mother lead to Medicaid covering just a few hundred abortions a year. Such a vast expansion of the scope of the rape exception would almost certainly launch a major political controversy. But just to be sure, Mother Jones asked Planned Parenthood whether it had ever considered trying to use the rape exception to convince the government to pay for abortions for teenagers “based solely” on their age. The group said no.

Here’s the bottom line: all of the most important anti-abortion groups and lawmakers oppose the exceptions that allow for federal funding of abortions in cases of rape and incest. They believe that abortion is an absolute moral wrong. Supporters of H.R. 3 argue that the “forcible rape” language made no practical difference at all, and was just meant as a clarification to fend off a secret effort by Planned Parenthood and others to get the government to pay for tens of thousands of abortions for teenagers. But there’s another possibility: abortion foes have been fighting the rape and incest exceptions for years, and this was just another attempt to narrow them. In the case of H.R. 3, they first tried a frontal assault. That failed. This is their sneak attack.