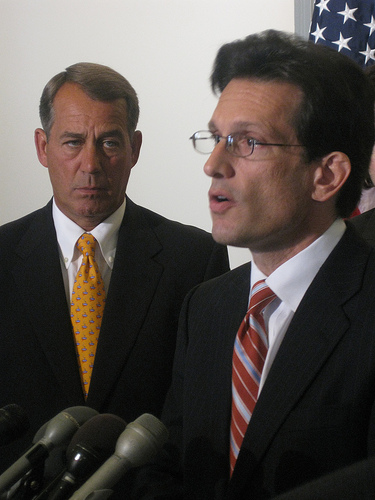 On Thursday, House Republicans finally unveiled their grand plan for tackling America’s jobs crisis and creating jobs for the unemployed. It clocks in at a mere 10 pages, in large type, chock full of slick images. What’s missing is, well, any legitimate solutions to lowering the nation’s 8.6 percent jobless rate. The Washington Post‘s Ezra Klein wrote, “It looks like the staffer in charge forgot the assignment was due on Thursday rather than Friday, and so cranked the font up to 24 and began dumping clip art to pad out the plan.”

The criticism is well deserved. Reading the “House Republican Plan for America’s Job Creators” (PDF), released by the House GOP leadership, is an exercise in wonderment: you wonder what the GOPers actually propose. Several of the “Republican Solutions” are a bit vague. “After a systematic review of our visa system, the Congress should undertake prudent reforms,” reads one “solution.” Another “solution”: “We will work to control the federal deficit to assure investors and entrepreneurs that our nation’s elected leaders are finally getting serious about paying off the debt over time.” Details? Apparently, the GOP view was, why bother?

The GOP plan boiled down to its essence is rather retro: Roll back regulation, lower taxes, pass free trade agreements, shrink the US debt, and boost energy production. In other words,  the GOP’s overall agenda for the past three decades. There’s nothing in this plan that is specific regarding the current jobs crisis, nothing to address such key issues as long-term unemployment, skyrocketing youth unemployment, the war on unemployment benefits in the states (PDF), the use and efficacy of job retraining for laid-off workers, or the polarization of the American work force. It’s empty rhetoric, recycled talking points, and campaign slogans.

Klein zeroed in on the fundamental flaw:

[T]he document doesn’t admit the existence of a particular unemployment crisis that might require a tailored response. The only problem it admits is, well, Democrats. “For the past four years, Democrats in Washington have enacted policies that undermine these basic concepts which have historically placed America at the forefront of the global marketplace,” the document explains on its first page. “As a result, most Americans know someone who has recently lost a job, and small businesses and entrepreneurs lack the confidence needed to invest in our economy. Not since the Great Depression has our nation’s unemployment rate been this high this long.”

You don’t have to admire the Democratic policy agenda to wonder if someone in Speaker Boehner’s office shouldn’t have raised his hand and pointed out that George W. Bush was president four years ago and he was a Republican, and perhaps there should be a pro forma mention of Wall Street and the financial crisis somewhere in this narrative. Sadly, the most significant employment crisis in generations has stopped generating new thinking and has become simply another opportunity to bash the other party while pushing your perennial agenda. That’s a shame, because with 15 million unemployed and the recovery sputtering slight, we really do need new thinking and a sense of urgency on behalf of both the unemployed and the economy. In fact, we need it now more than ever.

That new thinking isn’t coming from the Republican Party. But the Democrats now have a chance to make hay out of the GOP jobs plan, like they did with Rep. Paul Ryan’s attack on Medicare. With the economy the most pressing issue for American voters, this this puny plan provides more political ammo for the Ds. Yet if they attack the GOPers on jobs, they’ll have to be able to present a strong case that they can do better, and the last election shows how much of a challenge that can be.