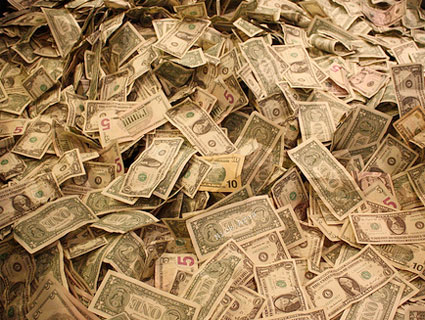 Republican super lawyer James Bopp, the mastermind behind the Citizens United case that opened the door to unfettered corporate campaign spending, has a new scheme that would tie political candidates more closely than ever before to corporations and other special interests seeking to influence federal elections. He’s trying to unleash what could be called a “super-duper PAC.”

Last week, Bopp registered the Republican Super PAC (or political action committee) with the Federal Election Commission (FEC) as an independent expenditure committee. That means the money it raises can’t be coordinated with any of the candidates it supports, but that it can accept and spend unlimited contributions from individuals and corporations. Outside expenditure groups are nothing new to American politics. Bopp, in fact, helped pioneer such groups with the creation of the first “527” organization—nonprofit groups that can spend money on campaigns but that are regulated by the Internal Revenue Service, not the FEC. (Read the Mother Jones profile of Bopp here.) But Bopp’s super PAC envisions doing something that’s never been done before: using candidates themselves to do the fundraising.

“The different thing here with our PAC is that we are going to harness the political fundraising of candidates and parties,” he says. He explains that the committee will allow candidates and parties to fundraise for their campaigns and party organs at the same time they solicit unlimited, anonymous contributions to the super PAC.

Here’s how it works: Say House Speaker John Boehner (R-Ohio) approaches the CEO of Exxon for a contribution to his reelection campaign. Under federal law, the CEO can only give Boehner $2,500. In the past, that’s the end of the conversation. But Bopp’s plan envisions Boehner and his campaign asking that same donor—and his company—to pony up more money, as much as he wants, for the Republican Super PAC. The donor can even specify that the money be spent supporting Boehner or attacking his opponent. Then Bopp’s PAC can buy ads, send out mailings, canvass neighborhoods, and do all the other things a political campaign typically does on Boehner’s behalf.

“But of course we will not coordinate our spending with anyone,” Bopp notes, because the law still prohibits such PACs from working directly with candidates. But, he says, he can have candidates do the fundraising because “coordination only applies to spending, not to the fundraising.” However, the Republican Super PAC is specifically designed to strategize with other outside expenditure groups, such as Karl Rove’s American Crossroads. Bopp won’t say whether he’s consulted with Rove, but he notes, “We certainly hope and plan to work with other likeminded groups so we can maximize our effectiveness.”

While Bopp’s new group sounds suspiciously like a way for GOP donors to circumvent the $30,800 individual contribution limits to the Republican National Committee (RNC), which is $20 million in the hole heading into the 2012 elections, Bopp says that’s not the case. He says the PAC is merely designed to tap the party’s fundraising power to help it compete with Democrats, who outraised the GOP significantly in the 2008 presidential campaign.

Bopp, the RNC committeeman from Indiana, says the RNC will still play a central role in campaigns because it is allowed to coordinate with candidates about how to spend their money and manage their campaigns. “That’s something we will not be able to do,” Bopp says. In fact, Bopp and the Republican Super PAC co-founders, Oregon RNC committeeman Solomon Yue and Louisiana member Roger Villere, will brief the RNC on their plan on Wednesday at a meeting in Dallas.

The Republican Super PAC is the logical outgrowth of Citizens United and a series of other recent court decisions that have overturned long-standing restrictions on corporate campaign spending. Bopp says these rulings allow his new group to go into uncharted campaign finance terrain. “This is perfectly legal,” Bopp insists.

Tara Malloy, associate legal counsel at the Campaign Legal Center, isn’t so sure. “There’s no question that McCain-Feingold as written would have prohibited this,” she says, noting that the landmark campaign finance law prohibits federal candidates, office holders, and party officials from soliciting funds for outside groups, including charities, that exceed the federal contribution limits. Candidates making the “ask” for such outside groups would be indebted to the donor and might make policy decisions accordingly, Malloy says. The purpose of the ban was to prevent this. “He or she will know that someone is giving tens of thousands or millions to PACs that may help his or her campaign,” Malloy says.

Bopp, she explains, is taking advantage of some vagueness in the law left after several court decisions struck down parts of McCain-Feingold but didn’t specifically address the solicitation ban. But technically, Malloy says, “Solicitation restrictions are still part of the law. I would think that a soliciting candidate or officeholder would be taking some risk” in raising funds for Bopp’s group.

It seems likely that Bopp may be provoking a legal challenge that would definitively wipe out the solicitation ban. And he’ll probably get it. Back in 2000, after he started the first 527 group, the Democratic Congressional Campaign Committee sued the group alleging it violated campaign finance laws. Not only did the DCCC lose, but just a few years later the Democrats were busy setting up their own 527s for the 2004 presidential campaign. “I’m the treasurer of this thing, so I’m the one who goes to jail,” Bopp says. “I assure you it’s legal. My wife insisted on it.”