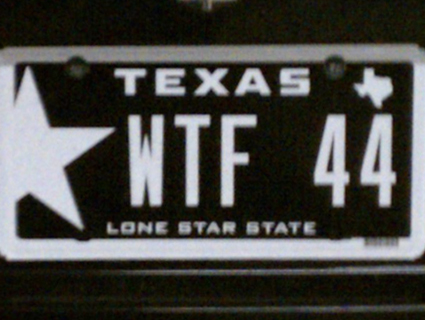 Recently, an observant Capitol Hill staffer alerted Mother Jones to a 2007 Lincoln Navigator in a congressional parking lot that was sporting eyebrow-raising license plates. The Texas tags read: “WTF 44.” The staffer helpfully snapped a photo (see above) and sent it along.

WTF, we surmised, stands for—well, you know. And 44 is a likely reference to President Barack Obama, the 44th president of the United States. Put them together and you’ve got a mobile middle finger to the commander-in-chief. Clever, right? It’s possible that the plates—one of which had a Texas Tech sticker on it, indicating that the driver might be an alum—could stand for “Win the Future,” Obama’s State of the Union catchphrase. Then again, probably not.

Based on where the SUV was spotted, in the parking lot of the Longworth House Office Building, it seemed likely that the vehicle belonged to a congressional staffer, or perhaps a House member. So who was sending Obama this not-very-bipartisan message? Members of Mother Jones‘ Washington bureau sent out tweets asking if anyone could ID this angry Texan. The Houston Chronicle made a similar request via its web site, even offering a prize to the first person who could unmask the Navigator’s owner. Nada. But there were additional sightings of the car.

Next, I tried a couple commercial services that, for a small fee, will track down the owner of a car based on a license-plate number. These searches, though, came up empty. Then I filed a public information request with the Texas Department of Motor Vehicles.

A few days later, in a follow-up call concerning the request, a DMV official asked me for the plate information and ran it in the agency’s database. As the information popped up on her screen, I heard her gasp. She told me the information was “sensitive.” I asked whether this had to do specifically with the individual whose registration information I was requesting, or because of general privacy issues. “Both,” she responded, refusing to provide any further information by phone.

In a subsequent call, a separate DMV official, who works in the agency’s special plates division, supplied more information that contributed to the mystery. She said that a committee reviews all novelty plate requests to weed out tags containing vulgarity, racist connotations, sexual references, or other terms that might be objectionable to fellow motorists. She told me that the plate “WTF” is specifically banned. “It’s currently in our system as ‘Do not issue this plate,'” she said. She seemed surprised that WTF 44 had been issued, and said she “strongly” thought it was an “inappropriate reference.”

It took several weeks, and further back and forth with the Texas DMV, but I finally obtained the title and registration information connected to WTF 44. “Release of personal information restricted,” the document notes. But this record does provide the basics. It notes there’s a lien on the vehicle (indicating a loan) from the Congressional Federal Credit Union, a banking institution largely used by House employees. The document specifies that WTF 44 is a “special plate”—that is, not one that was randomly assigned. And it lists the owner of the Navigator: Scott Graves of Bronte, Texas.

Graves is the legislative director for Rep. K. Michael Conaway, a Texas Republican who represents a district in the western part of the state and who serves as a deputy Republican whip. Graves has worked for Conaway since the lawmaker entered Congress in 2005, starting out as a legislative assistant and working his way up to his current position in 2007. According to Graves’ LinkedIn profile, he attended Texas Tech University.

Graves’ Twitter feed reveals little in the way of Obama-bashing, but it does highlight a certain fondness for the WTF shorthand. Linking to a photo of an odd mural spotted in the Denver airport, he tweeted, in October, “Hey, Denver airport and whoever decided what life size murals to put up by baggage claim. WTF?” On Facebook, where Graves’ profile shot is of Tom Selleck in a Speedo, Graves lists as one of his “interests” a page called “Can this Goat get more fans than Barack Obama?”

Graves did not respond to a request for comment. But when I reached Conaway’s spokesman, Sam Ray, and described the license plate to him, Ray said, “This is the first I’ve heard of that.” He told me it was unclear to him what type of statement Graves is making: “To be honest, I get where you’re going, but I’m not sure that’s what that means. That’s like conjecture to me because you don’t have any proof that’s what that means.” He added, “I don’t know, maybe that was his number in football.” If that was the case, I responded, this could easily be cleared up by Graves. I also asked for a response from Conaway, concerning whether he approved of the statement his legislative director was apparently promoting.

Ray promised to look into it. He never got back me and didn’t respond to a follow-up call. WTF, indeed.