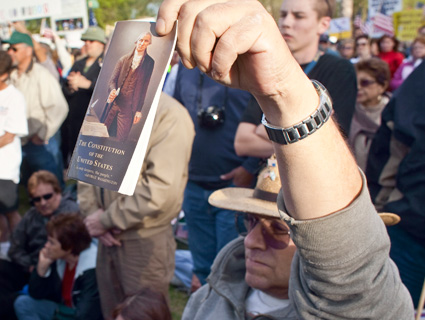 Come September, public schoolkids could be receiving a tea party-fueled tutorial in the Constitution—or at least, the movement’s version of it.

In 2004, at the urging of the late Sen. Robert Byrd (D-W.Va.), Congress required any school accepting public money to teach students about the Constitution during the week of September 17. Most people are unaware of this “Constitution Week” requirement, and few schools have apparently complied with the mandate.

Enter the Tea Party Patriots, one of the nation’s largest tea party umbrella groups, which has seized on this obscure congressional mandate, urging its members to “adopt a school” during Constitution Week. The group recently blasted out an alert to supporters that included instructions on how to pressure school officials to follow the congressional requirement. If they refuse, TPP advocates staging a protest and alerting the media to the school’s failure to adhere to the law. “Patriots should not have to remind schools to teach the history of the most important document in our country,” TPP’s leaders write on the group’s website explaining the new campaign. “That we have to do so is an indication of how awful the public school system has become with regard to teaching U.S. history.”

Teaching kids about the Constitution is certainly a laudable goal, especially given the many public surveys showing that most Americans can’t even name the three branches of government. But it’s the tea partiers’ favored curriculum that may concern parents of both liberal and conservative persuasions.

As part of the “adopt a school” campaign, TPP and its members are advising school officials to rely on lesson plans, DVDs, and a package of other course materials created by the National Center for Constitutional Studies (NCCS). The group was founded by Cleon Skousen, a rabid anti-Communist with a highly controversial take on American history. Skousen, who died in 2006, was the author of Glenn Beck’s favorite book on the Constitution, The 5,000 Year Leap. Among other things, he promoted the idea that the Constitution is a divine document that may have biblical roots. Along with NCCS’s curriculum, TPP also suggests inviting a volunteer from the center into the classroom. To help with the campaign, TPP has even hired Bill Norton, one of the center’s volunteer instructors (who dresses up as James Madison for his lectures), as its new “constitutional education coordinator.”

Last year, I took one of the center’s classes on the Constitution. If its public school curriculum resembles anything like what I witnessed, it has no place in the nation’s classrooms. Among other things, NCCS uses materials written by Skousen suggesting that Anglo-Saxons are descended from a lost tribe of Israel; Skousen claimed this meant the Constitution may have been inspired by God, who intended for America to be a Christian nation. The very same bogus history has been perpetuated by the white supremacist movement.

Very little of the eight-hour lesson I sat through included a discussion of how the Constitution affects average people, or how it’s been changed over time to reflect the nation’s progress—such as the amendments giving women the right to vote, ending slavery, and lowering the voting age. Instead, my fellow classmates and I learned about how the original Jamestown settlers were communists who starved to death because of their failure to embrace the sort of capitalism that the Constitution was clearly designed to promote. We were also told that national parks are unconstitutional, because the Constitution bars the federal government from buying land for anything but military installations and post offices.

Because of the distinctly religious overtones of NCCS’s constitutional teachings, Rob Boston, a senior analyst at Americans United for the Separation of Church and State, thinks that any schools that use the group’s curriculum might be vulnerable to a lawsuit. “I think you could make a strong argument that these bogus history courses are designed to impart religion as well,” he says. “Certainly it’s not anything that a public school should want to consider, and not just for constitutional reasons but just because it’s just bad history.”

Caroline Fredrickson, the executive director of the left-leaning American Constitution Society, which has been an active participant in Constitution Week for several years, says that the Skousen-based teachings are so outside the mainstream that even the leaders of ACS’s conservative counterpart, the Federalist Society, would be likely to take issue with them. “Any tea party organization that steps into the classroom has got to make sure they are actually educating students and not misleading them,” she says.