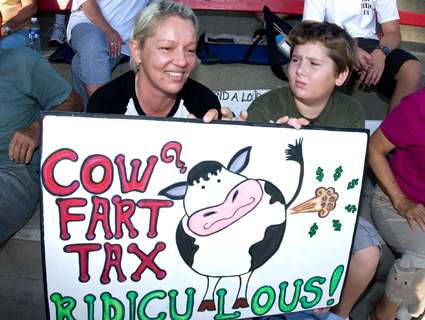 From cracking down on milk spills to regulating human respiration, the power-crazed bureaucrats at the Environmental Protection Agency will stop at nothing to impose their sinister, tree-hugging agenda on the American public. At least, that’s what Republican lawmakers, tea party activists, and industry groups would have you believe.

Conservatives have never been big fans of the EPA and its regulations, but lately the right has ramped up its assault on the agency. During the recent budget battle, House Republicans sought to decimate the agency’s funding and handcuff it from acting on a long list of environmental concerns. GOP Presidential contender Newt Gingrich, meanwhile, has made abolishing the agency part of his campaign platform.

As Republicans attack the EPA, they are deploying an array of conspiratorial claims about all the things the agency plans to regulate. Here are some of our favorites:

BULLETS Last August, a rumor began circulating among pro-hunting and fishing groups that the agency was poised to ban the use of lead in bullets and shotgun shells. The claim soon went viral on right-wing blogs and TV shows. Before long, the president of the National Rifle Association joined the fray freakout, warning that this might be yet another “vehicle to implement gun control.” GOP House members proceeded to lash out at the nonexistent move as an “assault on rural America.”

Where did the claim come from? Earlier that month, the Center for Biological Diversity and other environmental groups filed a petition asking the EPA to consider banning the use of lead in ammo and fishing tackle, arguing that these products are exposing wildlife—and the people who consume it—to harmful levels of the heavy metal. But the EPA, for its part, had no plans to implement this agenda. “EPA was not and is not considering taking action on whether the lead content in hunting ammunition poses an undue threat to wildlife,” the agency said in a statement.

This unambiguous statement, however, hasn’t stopped Fox News from continuing to hype the imagined gun grab.

SPILLED MILK In late January, the Wall Street Journal published an editorial decrying a new EPA rule that the paper said would require milk spills to be treated like oil slicks. You can imagine the ensuing flurry of commentary ranting about how the agency was “crying over spilled milk.”

House Republicans made this claim a focal point in their EPA attacks. “How can the EPA promulgate new rules like this?” asked Rep. Jeff Flake (R-Ariz.) during a March 3 hearing featuring testimony by EPA Administrator Lisa Jackson. “What’s next—sippy cups in the House cafeteria?” Rep. Denny Rehberg (R-Mont.) made a joke of the milk-spill myth in a speech back home: “If anyone wants a ‘first responder’ for spilled milk, just adopt a cat!”

At the heart of this claim is the EPA’s Spill Prevention, Control and Countermeasure rule, which requires oil and gas companies to develop a plan for preventing spills. Because milk contains animal fat, an oil, milk has been included since the rules were first drafted in 1973. The rules were updated in January 2009 and took effect at the end of February, which appears to have prompted the new outrage on the right. The Chamber of Commerce named the EPA’s supposed regulation of spilled milk the “Outrage of the Month” in April.

But here’s the thing: Contrary to how the agency’s foes spun the update, the EPA’s proposed new rules explicitly proposed excluding milk storage tanks from the spill prevention program. In April, the agency followed through with a permanent exemption. You’d think this would put an end to the milk-spill meme. Nope. Business groups are still milking it.

DUST The EPA regulates particulate matter under the Clean Air Act, which is mostly aimed at dealing with soot and other emissions from power plants, factories, and automobiles. But the act also includes dust, and the EPA is revisiting its dust standards, which have been in place since 1987, after an agency panel suggested lowering the limits. However, EPA chief Jackson told the House Committee on Agriculture in March that the agency has “no plans” to regulate dust, though the agency is compelled by law to complete its scientific review. A decision on how to proceed is expected this July.

Of course, at the mere mention of dust regulations, members of Congress—and others—promptly began freaking out. Last September, a bipartisan group of 75 western lawmakers wrote to the EPA warning that this “lays the foundation for establishing the most stringent and unparalleled regulation of dust in our nation’s history.” And last month, Rep. Robert Hurt (R-Va.) introduced a law that would ban the EPA from taking any action on the issue.

Even with no rules proposed, let alone implemented, the National Cattlemen’s Beef Association is ginning up fears of “heavy fines for creating dust by simply driving down a dirt road.”

HOME ENERGY USE When it comes to the government’s efforts to make homes more energy-efficient, EPA haters have come up with all kinds of reasons to fear government. Rep. Steve Scalise (R-La.) has warned that energy-efficiency measures contained in the House climate bill would create a “global warming Gestapo”.

Obama conspiracy theorist extraordinaire Jerome Corsi has similarly warned that the “energy police are about to invade your home with ‘smart meters.'”

Meanwhile, tea party darling Michele Bachmann (R-Minn.) has been leading the charge to repeal a law phasing out incandescent bulbs in favor of more efficient compact fluorescents. Shortly after decrying a government that “tells us which light bulbs to buy” in her televised State of the Union rebuttal earlier this year, she reintroduced her “Light Bulb Freedom of Choice Act.”

BREATHING The agency began phasing in new greenhouse gas regulations in January, targeting major emitters, such as coal-fired power plants. That hasn’t stopped tea partiers, industry groups, and their allies in Congress from dreaming up things the EPA will soon be cracking down on in the name of climate change—cow farts, hedge trimmers, nursing homes, and, yes, even human respiration. “Every living person is now a source of pollution by exhaling CO2 and water vapor,” Rep. Denny Rehberg (R-Mont.) said in a January 2010 speech on the House floor. “Every breath you take, every word you utter is now subject to EPA regulations,” Rep. Denny Rehberg (R-Mont.) said in a speech on the House floor. “The American people need room to breathe.”

In reality land, the EPA has issued a rule specifically limiting the emission regulations to the largest sources in the country—meaning a person would have to emit quite a bit of hot air to qualify. Not that we’re writing off that possibility in Rehberg’s case.