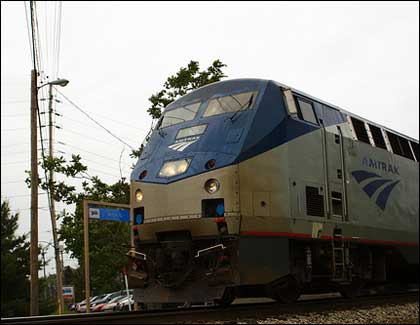 In his 2011 State of the Union address, President Obama ran down a long list of things the nation needs to do better. Among expected topics, like education and healthcare, Obama noted infrastructure, and more specifically—high-speed rail. Parts of Europe and Russia invest more in their railways than we do, he said, and it’s high time we start catching up.

That mission made some headway this week—but not in quite the way the rail industry would have hoped for. On Wednesday, the House Committee on Transportation and Infrastructure held a legislative hearing to discuss a draft bill that aims to improve high-speed and intercity passenger rail for the nation. How? By privatizing Amtrak.

If implemented, the GOP-sponsored bill would transfer control of the Northeast Rail Corridor—the train web connecting major Northeast cities—from Amtrak to the Department of Transportation. DOT would then oversee a private sector bidding process for high-speed rail projects in the Northeast, and for intercity routes nationwide.

For some, this proposal smells like trouble. As Edward Wytkind—President of the AFL-CIO’s Transportation Trades Department—put it at Wednesday’s hearing, “this is an Amtrak bankruptcy plan” that could put up to 20,000 of the company’s jobs at risk.

Committee chairman Rep. John Mica (R-Fla.) emphasized that he (along with Rep. Bill Shuster (R-Pa.), the bill’s other sponsor) “have guaranteed, promised, committed to preserving labors, benefits, wages” for Amtrak workers. A briefing memo says the mass reshuffling will “create[] new jobs in rail construction” while “protecting the jobs of any displaced Amtrak employees.” Neither yesterday’s hearing nor the memo, however, gave much detail as to how both job creation and preservation will happen.

The bill’s reasoning goes like this: Amtrak has failed to implement high-speed rail and to maintain decent ridership numbers in the place where both those things should be easiest—the densely populated Northeast Corridor. And yet, as the memo points out, Amtrak’s 2010 NEC ridership was lower than it was in 1977 (PDF). In a place with oodles of people treading distances that aren’t plane-worthy, why aren’t trains doing better?

It should be noted that several parties, including Rep. Corrine Brown (D-Fla.)—Democratic Ranking Member of the Subcommittee on Railroads—dispute those 2010-1977 numbers, saying they were arrived at by comparing apples to oranges. That’s one discrepancy in the bill—are there more?

The proposal details a slew of other Amtrak flaws that need verification. As a Bostonian who’s traveled the Corridor for years, I can vouch for at least a few of them. Amtrak’s current NEC prices are prohibitively high, especially given the large number of universities—and thus, penny-pinching students—in each of these cities. And higher-speed Acela trains aren’t very much faster than Amtrak’s other trains. (A regular Boston-NYC trip, at around $70, takes 4 hours. The Acela, at about $130, takes 3 hours and 35 minutes.) Those prices are especially high given the myriad bus companies that shuttle passengers between Northeast cities for around $20 or $30 a trip. And Amtrak isn’t exactly stellar when it comes to punctuality.

But will privatization actually solve these problems? Who’s to say that rail prices will get substantially lower, or delays any less frequent? Currently, it’s unclear what kind of federal oversight, if any, will exist for the private companies once DOT selects them to take on rail projects. So, we can’t be sure what controls will exist over what companies charge—or how they’re working to better train operation logistics. Not only that, but the new plan, while driving lengthy development and construction in the NEC, could break down service on the one rail line that, despite flaws, remains one of the most popular and lucrative in the nation.

Attempts to do away with Amtrak, in one way or another, have cropped up during several past administrations—and they’ve never succeeded. That’ll probably be the case this time around as well because, as Rep. Brown points out, Congress has bigger infrastructure fish to fry; Mica’s “divisive legislation,” she thinks, “is dead on arrival in the Senate.”