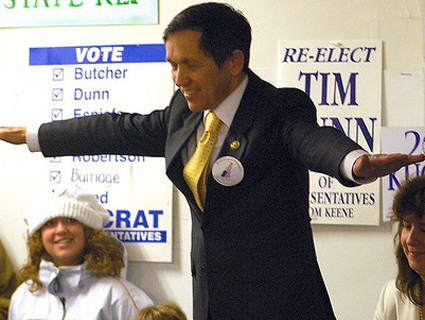 Here’s a good rule-of-thumb for any congressman: When someone accuses you of supporting a brutal, fascist-influenced regime that is openly slaughtering its own people, it’s generally a good idea to respond with an unambiguous “No, I do not support, and I strongly denounce, the actions of [insert regional dictator’s name here].”

That advice seems to have been lost on Rep. Dennis Kucinich (D-Ohio), who has drawn some attention for his most recent “fact-finding” mission to Syria.

Things got sticky for Kucinich on Tuesday, when the Syrian Arab News Agency (SANA), an arm of the Ministry of Information, reported that the congressman had commended Syrian dictator Bashar al-Assad for his willingness to “negotiate”:

There are some who want to give a wrong picture about what is going on in Syria… Assad cares so much about what is taking place in Syria, which is evident in his effort towards a new Syria and everybody who meets him can be certain of this… [He] is highly loved and appreciated by the Syrians… What I saw in Syria in terms of the open discussion for change… and the desire for national dialogue is a very positive thing.

Kucinich’s office quickly responded with a press release claiming SANA’s article “contained a number of mistranslations and mischaracterized statements” from his recent press conference in Damascus:

I stressed the importance of the government paying attention to the democratic aspirations of the people… Given the stakes for Syria… I will consider the article only an error, not a willful intent to mischaracterize my statements or my efforts in the region. I intend to continue my efforts to determine as best I can exactly what is happening… ever more mindful of the maxim, ‘lost in translation.’

Kucinich should have anticipated that Syria’s state-run media might use his visit for propaganda purposes. He could have tried to counter the propaganda value of his trip by using it to draw more attention to human rights abuses in Syria. But after kindly overlooking the supposed misrepresentation of his views, the famously dovish congressman stopped short of directly criticizing the Assad regime.

Kucinich has a history of this type of behavior. In May, he defended the Syrian regime’s crackdown on “Arab Spring” revolutionaries to the Cleveland Plain Dealer, explaining that although there were “serious concerns” about the conduct of Syrian forces, “We also know the Syrian police were fired upon and that many police were murdered.” (State-run media in Syria have repeatedly reported the mass murder of police officers, but the country’s restrictions on independent media make those stories difficult to verify.) “I would imagine that when things finally settle down that President Assad will move in a direction of democratic reforms,” he added.

Kucinich isn’t totally blind to this kind of conduct—he did denounce the Mubarak regime for its crackdown on Egyptian protesters in January and February. So why is a guy who is so adamantly “anti-war” still playing softball with a regime that willingly makes war on its own people?