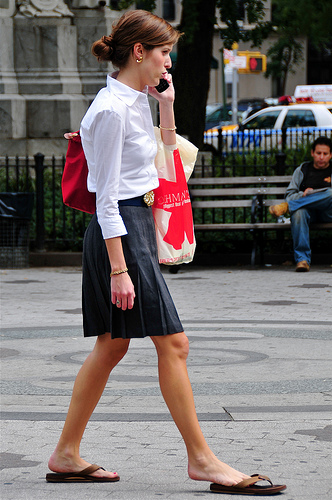 There’s been much to-do this week over the announcement from the World Health Organization that the group now believes radiation from cell phone is a possible carcinogen. As my colleague Kiera Butler pointed out, there’s not really much news there; we’re basically at the same point we’ve been for a while now—although a few studies have suggested a connection between cell phones and brain tumors, there’s not enough proof to firm up a direct link. But have federal regulators been complicit in downplaying the reasons we might want to be concerned?

The consumer watchdogs at Environmental Working Group believe that the Federal Communications Commission, the agency charged with regulating cell phones, may be deliberately shielding information from the public about possible concerns related to cell phone radiation in response to pressure from the Cellular Telecommunications and Internet Association (CTIA), the industry group representing wireless telecom companies. On its website, the FCC says that there is “no scientific evidence that proves that wireless phone usage can lead to cancer.” That’s true, but the FCC site also does not include much in the way of references to the studies that do suggest there may be some reasons for concern. And, as EWG has documented, the FCC last year deleted information from its website that advised consumers on how to avoid exposure to radiation.

The public battle heated up last June, when the city of San Francisco passed a “Cell Phone Right to Know” ordinance requiring cell phone retailers to prominently display information about the amount of electromagnetic radiation—also known as the “specific absorption rate” or SAR—that each phone releases. (The FCC has a database on its website that lists the amount of radiation emitted from each type of cell phone, but it’s nearly impossible to navigate.) The CTIA retaliated, first barring San Francisco from hosting future trade shows and then suing the city, claiming that the ordinance oversteps FCC’s regulatory oversight on the issue. Earlier this month, San Francisco backed off the new law in response to the suit.

In the heat of the debate over SF’s ordinance, the FCC held several meetings with the CTIA and individual telecom companies. Not long after, the FCC removed information from its website that noted that some parties have suggested buying phones with lower emission levels or taking precautions to limit exposure. EWG submitted a Freedom of Information Act request to the FCC seeking details about those meetings and all contact between the FCC and CTIA regarding the San Francisco ordinance.

The documents released in response to the FOIA request last September revealed that changing the website was one of the requests that the industry group had made of the agency in one of those meetings—though the FCC maintains that they made the change of their own volition to minimize “public confusion” on the issue and because the agency doesn’t think that the SAR level is a particularly useful way of measuring radiation exposure. Among the lines removed from the FCC website was one suggesting that consumers should “Buy a wireless device with lower SAR.” The FCC also added a line noting that the agency “does not endorse the need” to reduce exposure to these emissions.

While EWG can’t say decisively that it was the industry pressure that led the FCC to adjust the website, “the change that took place was very favorable for the industry,” says EWG senior scientist Olga Naidenko.

Naidenko says she hopes that the latest news on cell phones from the WHO this week will galvanize new concern about what we do and don’t know about the potential problems related to radiation exposure from cell phones. She also pointed to the fact that neither the FCC nor the Food and Drug Administration, which is also charged with oversight on this issue, has conducted their own studies to determine whether and how much we should be concerned about exposure. The FCC’s FAQ site notes, in response to the question “Is there any evidence that cell phones cause cancer?” that the agency is keeping an eye on research on the subject. It also says that the FDA is “participating in an industry-funded research project to further investigate possible biological effects”—which doesn’t necessarily make one feel all that much safer.

In the meantime, EWG has published its own rankings of how much radiation specific cell phone models emit and other advice for reducing exposure. And while the latest WHO news does not bring us any closer to knowing whether our cell phones cause cancer, I’m sure I’m not alone in preferring to limit exposure where possible.