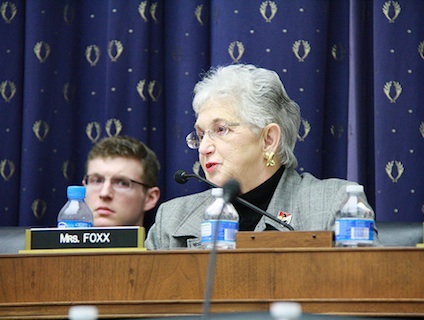 Know your farmer, know your food? Oh no, you don't, says Virginia Foxx.

In my post on the recent House Republicans’ assault on progressive ag policy, I mentioned the move to shut down USDA’s Know Your Farmer, Know Your Food initiative. The sponsor of the amendment that did the dirty deed is Rep. Virginia Foxx (R.-N.C.)—who, it turns, out, represents my district in Congress. This is the sort of thing she gets up to when she’s not defending children from the scourge of gay marriage, or lashing out at undocumented workers (who, incidentally, form the backbone of our area’s Christmas tree and nursery industries.)

As I mentioned in my previous post, Know Your Farmer is essentially a website. it gathers up and spotlights a hodgepodge of existing programs, funded by the 2008 Farm Bill, that direct modest amounts of money to rebuilding local and regional food systems and supporting new farmers.

That’s actually a significant service. The USDA’s own site is infamously unwieldy and impossible to navigate. Without Know Your Farmer, the few progressive federal ag programs we have—for example, ones that that help make farmers markets accessible to low-income mothers, or help small farmers launch profitable food businesses—would likely wither on the vine.

But Know Your Farmer isn’t just a website. It’s also the USDA’s most high-profile acknowledgement since the post-war rise of industrial agriculture that alternative food systems exist, matter, and deserve support. For decades, the USDA’s approach to agriculture could be encapsulated in the famous mantra of Ezra Taft Benson, Eisenhower’s USDA chief: “Get big or get out.” That attitude still dominates our farm policy, but Know Your Farmer shows that a rogue faction now operates within the agency, one that acknowledges that the scaling up and corporate domination of US agriculture hasn’t redounded to the public good.

Overall, Obama’s Ag policy has been wildly inconsistent, and has more often than not tilted toward the interests of Big Ag. But Know Your Farmer stands as his acknowledgement that the sustainable-food movement has earned a seat, even if not a particularly powerful one, at the ag-policy table after decades of grassroots policy work.

For Big Ag and the politicians who do its bidding, that’s apparently an unacceptable situation. Last year, three agribiz-aligned senators lashed out at Know Your Farmer in an angry letter to USDA chief Tom Vilsack. The initiative “involves subsidizing the so-called locavore niche market,” the lawmakers complained, decorously neglecting to mention that Big Ag gets many times the support in the form of crops subsidies and various ethanol goodies.

And now we get a full-frontal attack from the House, in the form of the dread Rep. Foxx’s amendment to shut down Know Your Farmer. Like her stances on gay marriage and immigration, Foxx’s jihad against Know Your Farmer is absurd. She mounted her attack based on budget concerns; but the initiative has no budget of its own. As the National Sustainable Agriculture Coalition dryly put it recently, “The practical impact of the Foxx amendment is unclear. The Know Your Farmer, Know Your Food initiative is not a program per se and does not have its own budget. Hence it is difficult to know how USDA would interpret the restriction.”

I suspect Foxx’s move wasn’t really about saving money, since you don’t save much by shutting down a website; but rather about sending a message: The USDA belongs to the companies that dominate US food and ag, not to the communities working on the ground to create alternatives. There’s more at stake here than just a web site. The Know Your Farmer flap is really about whether our political system is capable of conducting even moderately progressive food and farm policy.