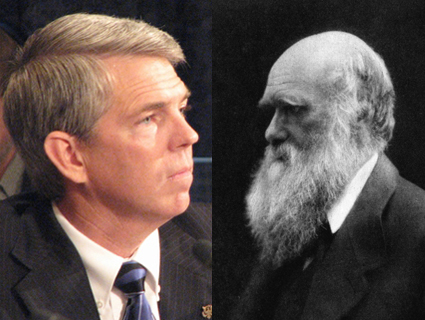 Talk to a prominent social conservative these day and the odds are pretty good that he or she is a fan of David Barton. Perhaps more than any other person, the Texas-based amateur historian has provided grist for the idea of American Exceptionalism—the argument that America’s unique success in the world is divinely caused and due to its committment to core Judeo-Christian principles. Minnesota Rep. Michele Bachmann, the tea party champion and likely 2012 presidential contender, invited him to teach members of Congress about the Constitution; former House Speaker Newt Gingrich says he learns something new every time he listens to Barton.

He’s a pretty influential guy. So what, exactly, does he teach? On Wednesday, Right Wing Watch flagged a recent interview Barton gave with an evangelcial talk show, in which he argues that the Founding Fathers had explicitly rejected Charles Darwin’s theory of evolution.* Yes, that Darwin. The one whose seminal work, On the Origin of Species, wasn’t even published until 1859. Barton declared, “As far as the Founding Fathers were concerned, they’d already had the entire debate over creation and evolution, and you get Thomas Paine, who is the least religious Founding Father, saying you’ve got to teach Creation science in the classroom. Scientific method demands that!” Paine died in 1809, the same year Darwin was born. Here’s the clip:

It’s been said that James Madison and Alexander Hamilton were ahead of their times. But perhaps not that prescient.

In the same interview, Barton explains that one of the main reasons that the colonies wanted to break away from England was because it would then become easier to abolish slavery. Anybody who has studied the basics of the American Revolution knows that the issue of slavery was tabled in order to secure approval of the Declaration of Independence. (For the record, Britain abolished slavery in 1833—32 years before the United States.)

This is kind of nuts, but also illuminating. Barton has emerged as a force by bridging two sometimes disparate strains of conservatism—the Chamber of Commerce crowd with the Christian Coalition crowd. In his lectures, they become one: Jesus opposed the minimum wage; Jesus opposed the progressive income tax; etc. You can only imagine the fervor with which Jesus would have endorsed the Paul Ryan budget. When someone like Bachmann says, as she famously did earlier this year, that the Founding Fathers worked to abolish slavery, Barton is where it starts. When Texas Gov. Rick Perry, another potential GOP presidential candidate, says we need to return to our Biblical principles to escape from our current system of economic slavery (yes, he really said this), he’s channeling Barton.

When it comes to the conservatives’ alternative reality—from Jesus to the Founders to the HMS Beagle—Barton is the right’s historian-in-chief.

*Update: A reader writes in to suggest that the headline for this post is less than accurate, considering Barton doesn’t mention Darwin by name, and that there was a theory of evolution that existed at the time of the Founders, so it’s not too far-fetched to think they would have been aware of that. Those are both fair points. But I think that’s giving Barton too much credit. Barton is arguing against the teaching of today’s scientifically accepted evolutionary theory by noting that, prior to the actual development of today’s evolutionary theory, the Founders opposed evolution. He’s conflating pre-Darwin and post-Darwin evolutionary theory in order to make a point about teaching Creationism in schools. My point isn’t that he doesn’t know the difference; it’s that he doesn’t mind blurring the difference.