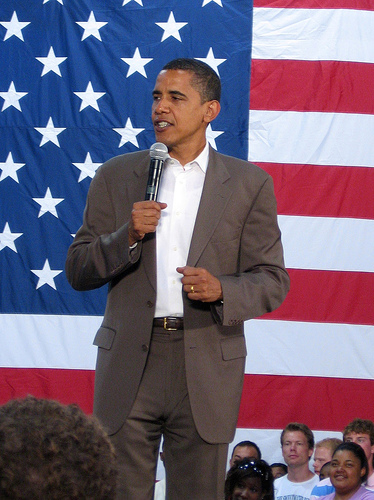 In the 2008 presidential campaign, Democratic candidates, especially Barack Obama, raked in major campaign donations from Wall Street, pulling in $71 million—$10 million more than Republicans. Obama himself counted Goldman Sachs, Citigroup, JPMorgan Chase, and the Swiss banking giant UBS among his top donors. But by the 2010 midterms, Wall Street had fallen out of love with Democrats, giving $152 million to Republicans—nearly $16 million more than went to Dems.

It should come as no surprise, then, to learn that Obama and his re-election team are putting on the full-court press with Wall Street’s deep-pocketed donors. As the New York Times reported, Obama recently met with 24 top finance executives in the White House, while top campaign staffers are courting Wall Street bigwigs to sign them up for the 2012 campaign.

Here’s more from the Times:

The president’s top financial industry supporters say they are confident that the support Mr. Obama needs will ultimately be there, despite the financial industry’s unhappiness over his efforts to tighten regulation of their businesses. But it is clear that those supporters will have to work much harder to win over the financial services industry than they did in 2008, before Wall Street’s bust, the subsequent clashes over policy and the sometimes bitter personal differences that lingered afterward.

Executives at large investment banks, a group that gave generously to Mr. Obama in his last campaign, are remaining on the sidelines for now. Only a small handful of such donors have appeared in Mr. Obama’s joint campaign filings with the Democratic National Committee, though officials there said more would appear in the coming weeks.

Some traditional heavy hitters in Democratic Wall Street fund-raising have stepped out of the game. They include Maureen White and her husband, Steven L. Rattner, a founder of the Quadrangle Group, whose Fifth Avenue living room was a critical conduit between Wall Street and Democratic candidates in the years before Mr. Rattner joined the Obama administration to help restructure the auto industry. The couple did not resume their old role after Mr. Rattner left government, and he was caught up last year in an investigation into kickbacks to New York’s state pension fund.

Obama’s biggest competitor when it comes to Wall Street’s cash is undoubtedly GOPer Mitt Romney, who made his fortune at the private equity firm Bain Capital, which he co-founded in 1984. Romney’s donor list from his 2008 presidential bid reads like a who’s-who of financial heavyweights: Citigroup, Merrill Lynch, Morgan Stanley, UBS, Credit Suisse, and more. If Romney ends up claiming the GOP’s nomination (he’s the early frontrunner), prepare for a major battle over who ends up pocketing Wall Street’s largesse.