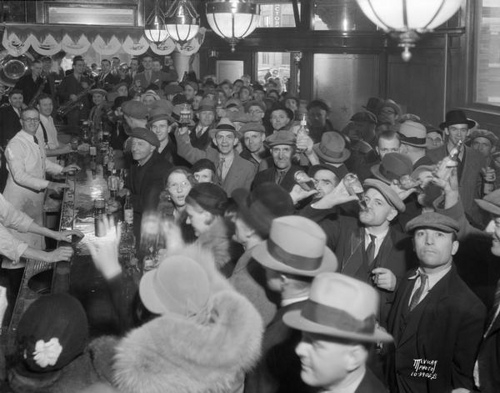 For Proust, it was madeleines. For Thoreau, a bean patch. For F. Scott Fitzgerald, literary inspiration came from—or after—a stiff drink. We’ve all read the drunken exploits of Nick Carraway and Gatsby’s legion of vacuous partiers, and it’s no secret that Fitzgerald himself was more than a casual imbiber. But what did the great American author make of his own drinking problem? On Booze, released this week by New Directions, is a collection of Fitzgerald’s writings on drinks, drinking, and life as an alcoholic.

Like the wavering temperament of a gin-soaked booze hound, the book moves quickly between the hilarious and the tragic. In highlights from Fitzgerald’s notebooks, we see the extent to which alcohol informed his observations of the world. “Debut” is defined as “the first time a young girl is seen drunk in public”; a favorite Thanksgiving recipe is Turkey Cocktail, prepared by adding “one gallon of vermouth and a demijohn of angostura bitters” to a turkey (shaken, not stirred). But the joyous buzz starts to wear off when Fitzgerald turns to a deep and disturbing analysis of the years he spent as an alcoholic, a period he refers to as “the crack-up.”

Fitzgerald’s prose is, characteristically, as rich as the life he leads: when he begins to emerge from years of intoxication, he senses “a feeling that I was standing at twilight on a deserted range, with an empty rifle in my hands and the targets down.” We see the romantic life of a globe-trotting writer peppered with bouts of intense depression, amnesia, and insomnia. In the process, a book that could easily have been little more than a roundup of Mark Twain-esque pithy quotes, destined for the coffee table, becomes a probing, personal account of Fitzgerald’s great successes and failures, most of which get washed down with cocktails, claret, and/or champagne.

As with The Great Gatsby, the reader’s ability to sympathize with the protagonist is somewhat compromised by the latter’s immaturity and opulence. It’s hard to swallow Fitzgerald’s confessed introversion and loss of self-identity when he boils down ten years of traveling in Europe to a list of which grand hotels he stayed in and what was on their drink menu (In Nice, “we were alone with the deep blue grandeur and the filet de sole Ruhl and the second bottle of champagne;” in Bermuda, “we drank sherry on a veranda above the bony backs of horses tethered in the public sqaure”).

Still, opportunities are rare for famously drunk writers to tell their side of the story, albeit with slurred words. While On Booze probably won’t be a cause for revised analysis of the Fitzgerald canon, it does add a nuance to his biography, and as a summer read is as simultaneously racous and horrifying as the life it depicts. Expect a hangover.