From NOAA’s National Climatic Data Center, here’s a chart that shows the number of disasters, and their cost, for every year since 1980: 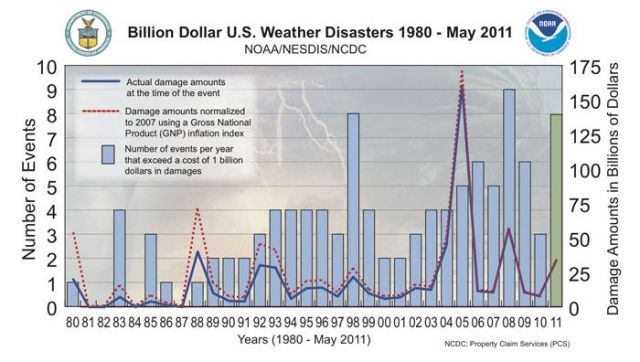 As you can see, we’re just halfway through 2011, and already eight extreme weather events in the United States have each caused more than a billion dollars in damage—a record since the National Oceanic and Atmospheric Administration began keeping tabs in 1980. The US has faced 99 weather-related disasters that cost at least $1 billion in the past 31 years, totaling $725 billion (when adjusted for inflation). But even though it’s only halfway through, 2011 ranks second overall in total number.

There have been $32 billion in damages caused by extreme weather events this year, which have included blizzards, tornados, floods, and wildfires, National Climatic Data Center director Tom Karl said last week. The NCDC, a division of NOAA, released a released these stats last week in the wake of this spring’s tumult.

Hurricane season—which tends to yield some of the costliest weather events—just started on June 1. And we’ve barely seen the beginning of the summer heat.

While the economic costs are high, so, too, are the human. There have been 575 deaths from this year’s weather events, the majority of them in the tornadoes in the Southeast and Midwest. The damage in Joplin, Mo. is a testament to the power of the most extreme among extreme weather events.

Of course, we’ve always had severe weather events. And this year so far has been more extreme than most. But scientists have now warned repeatedly that we should expect extreme events more often in the future as the climate changes. It’s safe to say we can expect more billion-dollar events down the line.

The front page photo of tornado devastation in Joplin, Missouri was taken by Andy Kroll.