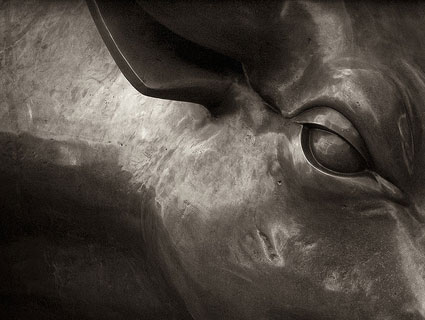 Big Wall Street banks really hate Claudio Ballard. A small-time inventor and founder of DataTreasury, a digital imaging company, Ballard has cost big banks at least $400 million by filing legal claims asserting that the banks have stolen his intellectual property, infringed on his patents, and refused to pay him for his work. For years, the banks have been trying to wield their immense political power to shoo this fly. Now, it looks like they might succeed: a new, bipartisan patent-reform bill working its way through Congress contains language written specifically to put Ballard out of business.

For at least five years, big corporations have waged a well-funded and sustained lobbying effort to persuade Congress to overhaul the nation’s patent system. They’ve pushed for measures that, among other things, would squash competition and make it harder for small inventors to fight back against the companies that steal their intellectual property. This week, the House is considering a parallel bill to one passed in the Senate in March that would radically change the 200-year-old process by which the government awards patents.

Historically, the US has granted patent rights to the “first inventor”—the person who could clearly prove that he or she originated an idea. The bill would revise that standard to grant the patent for a particular idea to the first person to file for it. It would also free the patent office from the congressional appropriations process and allow it to tap the millions in fees it generates to supplement its budget. Proponents say the legislation will speed approval times and help clear a backlog of more than 700,000 patent applications. The House Judiciary Committee approved the bill on Thursday; if it passes the full House, President Obama has promised to sign it.

But the bill contains an obscure provision inserted by Sen. Chuck Schumer (D-N.Y.) at the behest of big Wall Street banks. The language essentially immunizes big banks from patent infringement lawsuits filed by Ballard and DataTreasury. Ballard has long alleged that he patented a process for electronically processing checks in the mid-1990s. When most of the country’s major banks started using a similar process years later, Ballard started suing. His litigation earned him a reputation as a “patent troll”—someone who makes his money by suing over patents rather than building a company out of them. (DataTreasury is essentially a holding company with only a couple of employees.)

Ballard received some hefty settlements, and ultimately won a ruling from the patent office confirming the validity of his patents. Last year, Ballard won a $27 million jury verdict against US Bancorp for patent infringement, and he has been fighting to force the banks to continue paying him royalties for the use of his creation. The banks would like to get rid of him, and have been trying for years to get Congress to intervene on their behalf.

Ballard isn’t going down without a fight. He’s attempting to rally some unusual allies: tea party activists. In a piece in the Daily Caller last month titled, “The Tea Party should stop this bailout,” Ballard writes, “My question is simple: Haven’t banks been given enough special interest breaks? Isn’t that one of the reasons that the Tea Party came into being in the first place?”

Tea partiers, in turn, are gaining some traction on the Hill. Rep. Dana Rohrabacher (R-Calif.) has come out in opposition to the bill, writing this week in the National Review Online that it will “overturn 200 years of legal precedent, destroy constitutional protections afforded inventors and innovators, hurt our economy, and reward big banks.” The bill is supported by businesses ranging from tech giants like Apple and Verizon to pharmaceutical companies that rely on patent maneuvers to push out generic competitors.

Tea partiers, meanwhile, have found a more obscure reason to hate the bill. They’ve picked up on an analysis by a small inventor’s group suggesting that the measure could theoretically allow China to steal US technology using its enormous army of government hackers, then turn around and patent that same technology in the US. A leading proponent of this view is the grand dame of the religious right, Phyllis Schlafly, who in recent years has declared herself a tea partier. Schlafly has decried the bill in several of her Townhall.com columns, and has tried to rally the tea party troops to oppose it. In April she wrote:

A month later she declared:

The proposed patent bill will enable Chinese hackers to steal U.S. innovation secrets while they are in development, then file an application with the U.S. Patent Office under first-to-file, and thereby own new U.S. technology instead of merely stealing it. Owning the patents will enable China legally to take away ownership rights and profits from Americans who actually invent new technologies.

Failed Utah Senate candidate Cherilyn Edgar, a tea party activist herself, was among those answering the call. She was on the Hill last week lobbying members of Congress to oppose the bill. Tea Party Nation, Andrew Breitbart’s BigGovernment.com and other tea party organs have all come out against the bill and helped circulate letters from Rohrabacher to generate further outrage.

Glen Kotapish, president of the DC-based Inventors Network of the Capital Area, was surprised that tea partiers have rushed to the aid of small inventors, but was more than happy for the support. He invoked the memory of Philo Farnsworth, the forgotten inventor of the television, whose idea was ripped off by RCA, which then challenged his patents in court. Farnsworth eventually prevailed, but only after a decade of litigation. “If a big company is going to infringe, they’re going to infringe,” Kotapish says, “It’s very hard for small inventor to fight the big company.” The patent reform law, he notes, will only make that harder.