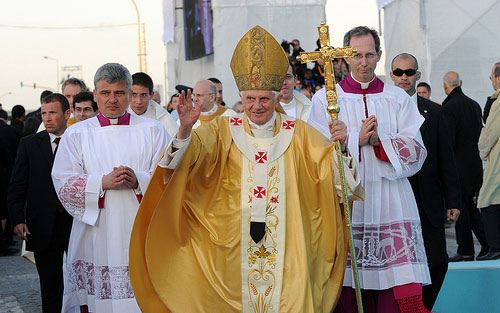 Okay, so it’s not the most barnstorming entry onto the social media scene ever, but props for the effort. I think I speak for all avid papal observers when I say I await His Holiness’ next tweet with barely contained anticipation. In honor of the historic occasion, here’s a brief survey of some other venerable institutions and figures’ belated first steps into the brave new world of modern technology.

Turns out the Pope was soundly beaten to the Twitter punch by another His Holiness. The Dalai Lama joined the Twitterverse last February. And unlike the Pope, the Dalai Lama has his own account, from which he regularly imparts spiritual wisdom. His most recent sagely words? “Compassion is a deep desire to see others relieved of suffering; love is the other facet, a strong wish to see others happy.” And talk about popular! @DalaiLama has over 1.96 million followers.

Presidential email accounts had always been a no-no. The Secret Service feared hacking; lawyers feared public review and subpoenas. But the tech-savvy president-elect, compulsively attached to his BlackBerry during the 2008 campaign, was having none of it, insisting that someone would have to “pry it from his hands” to get him to give it up. Ultimately, Obama got his way after agreeing to a series of security upgrades, and now uses the device to keep in contact with a small circle of friends and family members.

The Senate has had something of a schizophrenic relationship with television over the years. TV cameras regularly broadcast committee hearings beginning in 1947, and plans were quietly hatched in 1974 to televise the anticipated Nixon impeachment trial. However, Congress remained firmly opposed to opening up the Senate floor to television. Finally, in 1986, fearing itself overshadowed by the already-televised House, the Senate agreed to a three-month trial run, soon after which it voted to make TV cameras a permanent fixture.

After eschewing the new high-octane electric sound popular among his contemporaries in favor of folksy, acoustic sets during his early years, Bob Dylan famously “went electric” at the Newport Folk Festival in July 1965. Pulling out his electric guitar to play “Maggie’s Farm,” Dylan synced up with a-changin’ times, but also angered the Newport audience, who shouted at the folk legend for selling out. Dylan didn’t appear at the Newport Festival for another 37 years.

Thomas Edison, whose General Electric profited handsomely from direct current’s monopoly on the electricity market in the late 19th century, launched an all-out war against Nikola Tesla’s efforts to introduce alternating current. Attempting to discredit AC as dangerous, Edison staged several executions with it, including the infamous 1903 electrocution of Topsy, an elephant from a Coney Island zoo who had crushed three of her handlers to death. Sure enough, the 6,600 volts did the trick, but AC was quickly recognized as the future of electricity. Edison would eventually conclude the same, and GE soon began using it as well.

1896: Militaries pick up the telephone.

Militaries everywhere were slow to embrace the telephone in the late 1800s. More than 20 years after its invention, the British installed the first military telephone switchboard in 1896, although European armies continued to employ telegraphs and pigeon messaging well into the 20th century.