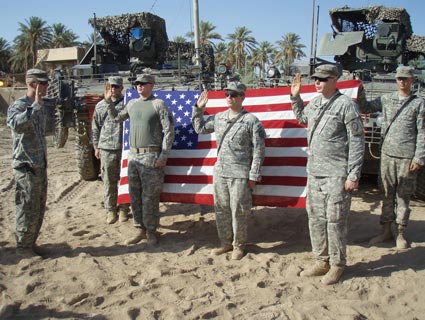 At periodic intervals, the American body politic has shown a marked susceptibility to messianic fevers. Whenever an especially acute attack occurs, a sort of delirium ensues, manifesting itself in delusions of grandeur and demented behavior.

By the time the condition passes and a semblance of health is restored, recollection of what occurred during the illness tends to be hazy. What happened? How’d we get here? Most Americans prefer not to know. No sense dwelling on what’s behind us. Feeling much better now! Thanks!

Gripped by such a fever in 1898, Americans evinced an irrepressible impulse to liberate oppressed Cubans. By the time they’d returned to their senses, having acquired various parcels of real estate between Puerto Rico and the Philippines, no one could quite explain what had happened or why. (The Cubans meanwhile had merely exchanged one set of overseers for another.)

In 1917, the fever suddenly returned. Amid wild ravings about waging a war to end war, Americans lurched off to France. This time the affliction passed quickly, although the course of treatment proved painful: confinement to the charnel house of the Western Front, followed by bitter medicine administered at Versailles.

The 1960s brought another bout (and so yet more disappointment). An overwhelming urge to pay any price, bear any burden landed Americans in Vietnam. The fall of Saigon in 1975 seemed, for a brief interval, to inoculate the body politic against any further recurrence. Yet the salutary effects of this “Vietnam syndrome” proved fleeting. By the time the Cold War ended, Americans were running another temperature, their self-regard reaching impressive new heights. Out of Washington came all sorts of embarrassing gibberish about permanent global supremacy and history’s purpose finding fulfillment in the American way of life.

Then came 9/11 and the fever simply soared off the charts. The messiah-nation was really pissed and was going to fix things once and for all.

Nearly 10 years have passed since Washington set out to redeem the Greater Middle East. The crusades have not gone especially well. In fact, in the pursuit of its saving mission, the American messiah has pretty much worn itself out.

Today, the post-9/11 fever finally shows signs of abating. The evidence is partial and preliminary. The sickness has by no means passed. Oddly, it lingers most strongly in the Obama White House, of all places, where a keenness to express American ideals by dropping bombs seems strangely undiminished.

Yet despite the urges of some in the Obama administration, after nearly a decade of self-destructive flailing about, American recovery has become a distinct possibility. Here’s some of the evidence:

In Washington, it’s no longer considered a sin to question American omnipotence. Take the case of Robert Gates. The outgoing secretary of defense may well be the one senior US official of the past decade to leave office with his reputation not only intact, but actually enhanced. (Note to President Obama: think about naming an aircraft carrier after the guy). Yet along with restoring a modicum of competence and accountability to the Pentagon, the Gates legacy is likely to be found in his willingness—however belated—to acknowledge the limits of American power.

That the United States should avoid wars except when absolutely necessary no longer connotes incipient isolationism. It is once again a sign of common sense, with Gates a leading promoter. Modesty is becoming respectable.

No one can charge Gates with being an isolationist or a national security wimp. Neither is he a “declinist.” So when he says anyone proposing another major land war in the Greater Middle East should “have his head examined”—citing the authority of Douglas MacArthur, no less—people take notice. Or more recently there was this: “I’ve got a military that’s exhausted,” Gates remarked, in one of those statements of the obvious too seldom heard from on high. “Let’s just finish the wars we’re in and keep focused on that instead of signing up for other wars of choice.” Someone should etch that into the outer walls of the Pentagon’s E-ring.

A half-dozen years ago, “wars of choice” were all the rage in Washington. No more. Thank you, Mr. Secretary.

Or consider the officer corps. There is no “military mind,” but there are plenty of minds in the military and some numbers of them are changing.

Evidence suggests that the officer corps itself is rethinking the role of military power. Consider, for example, “Mr. Y,” author of A National Strategic Narrative, published this spring to considerable acclaim by the Woodrow Wilson Center for Scholars. The actual authors of this report are two military professionals, one a navy captain, the other a Marine colonel.

What you won’t find in this document are jingoism, braggadocio, chest-thumping, and calls for a bigger military budget. If there’s an overarching theme, it’s pragmatism. Rather than the United States imposing its will on the world, the authors want more attention paid to the investment needed to rebuild at home.

The world is too big and complicated for any one nation to call the shots, they insist. The effort to do so is self-defeating. “As Americans,” Mr. Y writes, “we needn’t seek the world’s friendship or proselytize the virtues of our society. Neither do we seek to bully, intimidate, cajole, or persuade others to accept our unique values or to share our national objectives. Rather, we will let others draw their own conclusions based upon our actions… We will pursue our national interests and let others pursue theirs…”

You might dismiss this as the idiosyncratic musing of two officers who have spent too much time having their brains baked in the Iraqi or Afghan sun. I don’t. What convinces me otherwise is the positive email traffic that my own musings about the misuse and abuse of American power elicit weekly from serving officers. It’s no scientific sample, but the captains, majors, and lieutenant colonels I hear from broadly agree with Mr. Y. They’ve had a bellyful of twenty-first-century American war and are open to a real debate over how to overhaul the nation’s basic approach to national security.

Intelligence Where You Least Expect It

And finally, by gum, there is the United States Congress. Just when that body appeared to have entered a permanent vegetative state, a flickering of intelligent life has made its reappearance. Perhaps more remarkably still, the signs are evident on both sides of the aisle as Democrats and Republicans alike—albeit for different reasons—are raising serious questions about the nation’s propensity for multiple, open-ended wars.

Some members cite concerns for the Constitution and the abuse of executive power. Others worry about the price tag. With Osama bin Laden out of the picture, still others insist that it’s time to rethink strategic priorities. No doubt partisan calculation or personal ambition figures alongside matters of principle. They are, after all, politicians.

Given what polls indicate is a growing public unhappiness over the Afghan War, speaking out against that war these days doesn’t exactly require political courage. Still, the possibility of our legislators reasserting a role in deciding whether or not a war actually serves the national interest—rather than simply rubberstamping appropriations and slinking away—now presents itself. God bless the United States Congress.

Granted, the case presented here falls well short of being conclusive. To judge by his announcement of a barely-more-than-symbolic troop withdrawal from Afghanistan, President Obama himself seems uncertain of where he stands. And clogging the corridors of power or the think tanks and lobbying arenas that surround them are plenty of folks still hankering to have a go at Syria or Iran.

At the first signs of self-restraint, you can always count on the likes of Senator John McCain or the editorial board of the Wall Street Journal to decry (in McCain’s words) an “isolationist-withdrawal-lack-of-knowledge-of-history attitude” hell-bent on pulling up the drawbridge and having Americans turn their backs on the world. In such quarters, fever is a permanent condition and it’s always 104 and rising. Yet it is a measure of just how quickly things are changing that McCain himself, once deemed a source of straight talk, now comes across as a mere crank.

In this way, nearly a decade after our most recent descent into madness, does the possibility of recovery finally beckon.

Andrew J. Bacevich is professor of history and international relations at Boston University. His most recent book is Washington Rules: America’s Path to Permanent War. To listen to Timothy MacBain’s latest TomCast audio interview in which Bacevich discusses voices of dissent within the military, click here, or download it to your iPod here. To stay on top of important articles like these, sign up to receive the latest updates from TomDispatch.com here.